Will witnesses risk jail rather than cooperate with the Obama DOJ's pernicious war on whistleblowing? 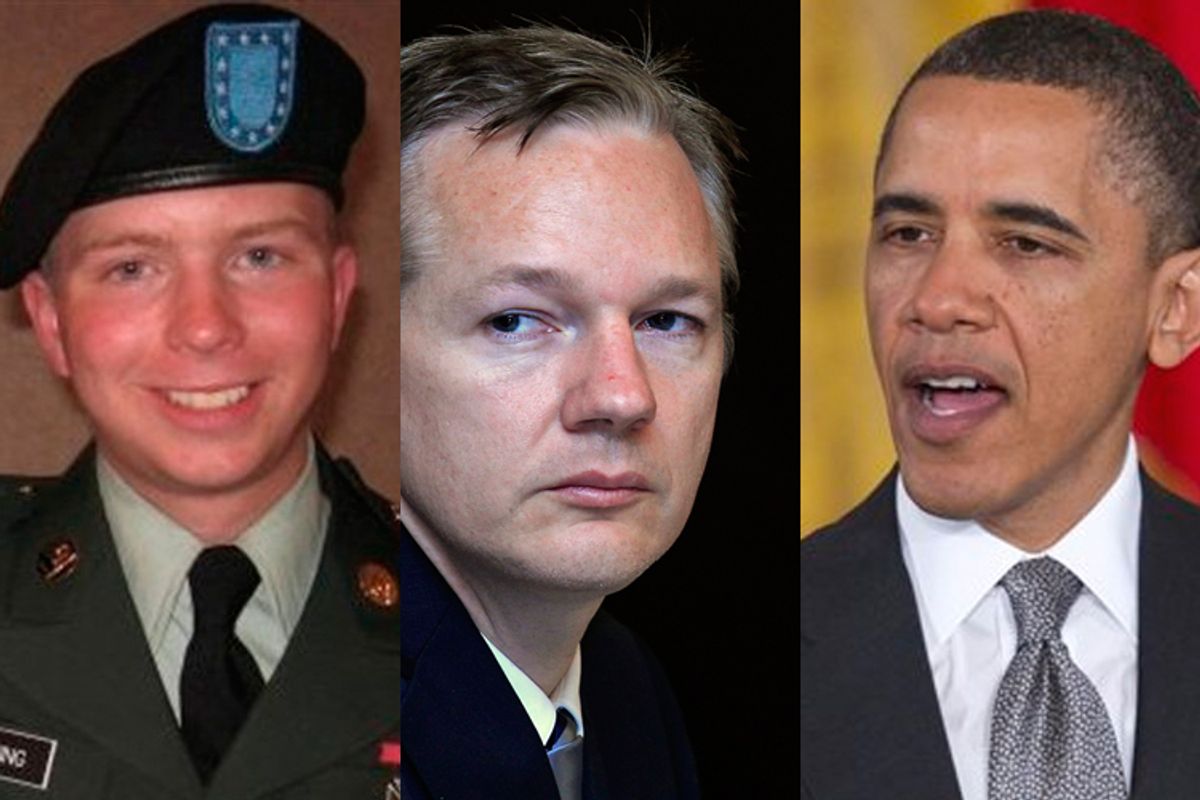 Last month, I reported that the FBI had served a Cambridge resident with a subpoena compelling his testimony in the active Grand Jury investigation into WikiLeaks and Julian Assange, and that the subpoena revealed a very broad scope to the criminal investigation.  A similar subpoena has now been served on David House -- one of the founders of the Bradley Manning Support Network who helped publicize the oppressive conditions of Manning's detention and who then had his laptop seized by the government without a warrant  -- compelling his testimony before the Grand Jury next Wednesday.  The subpoena and accompanying documents received by House can be viewed here and here.

This latest subpoena reveals how active the criminal investigation is and how committed the Obama administration is to criminally pursuing the whistleblowing site.  Also receiving subpoenas in addition to House and the Cambridge resident have been ex-Manning boyfriend Tyler Watkins, and a cryptography expert at Princeton, Nadia Heninger (whose Princeton photo is credited to Jacob Appelbaum, the persistently harassed American once identified as a WikiLeaks spokesman).

But it also highlights a very important potential controversy: the refusal of numerous witnesses to cooperate in any way with this pernicious investigation.  One witness who has appeared before the Grand Jury has already refused to answer any questions beyond the most basic biographical ones (name and address), invoking the Fifth Amendment right against self-incrimination to do so, and other witnesses are highly likely to follow suit.

One option for federal prosecutors when facing a witness who refuses to answer questions on this basis is to offer them immunity, meaning that nothing they say when testifying can be used to prosecute them (they can still be prosecuted, just not with the aid of anything they say while testifying).  Such an offer then precludes further invocations of the self-incrimination privilege as a grounds for refusing to answer questions, as it means there is no longer any danger that the witness could incriminate themselves by testifying.  In the event the government makes such an offer, the court would almost certainly compel the witness to answer questions.  But at least some of those witnesses -- ones who have already been subpoenaed or are likely to be -- intend to refuse to answer questions anyway, risking an almost-certain finding of contempt of court, which typically carries jail terms as a means of forcing testimony.

One witness or potential witness who is considering that form of civil disobedience told me they view the attempt to criminalize WikiLeaks as such a profound assault on basic freedoms, including press freedoms -- one motivated by a desire to conceal government wrongdoing and illegality -- that they would rather be imprisoned than cooperate in any way with those efforts. That is the mindset of true principled heroism, and if it actually comes to that, anyone committed to transparency and preservation of press freedoms should do everything possible to support such persons in any way they can (a similar conflict is possible with the Obama DOJ's subpoena served on New York Times reporter James Risen to force him to testify against his alleged source, a subpoena Risen has vowed to fight).

The attempt to criminalize WikiLeaks is clearly a leading prong in the Obama administration's truly odious and dangerous war on whistleblowers.  Just today, The Washington Post reports that the Obama DOJ's espionage prosecution against Thomas Drake -- who exposed substantial waste, corruption and illegality at the NSA -- is falling apart.  The Nation today examines how diplomatic cables released by WikiLeaks show that the U.S. worked cooperatively with large American corporations (Fruit of the Loom, Haines, Levi's) to block attempts by the Haitian Parliament to raise the meager minimum wage to $5/day for Haitian workers who labor in factories producing t-shirts and underwear (in the portions of his purported chat log selectively released by Wired, Bradley Manning said that part of his motive was that the diplomatic cables show "how the first world exploits the third").  It is because of revelations like those that the Government is so desperate to punish and deter future disclosures.

It is not hyperbole to say that the Obama administration is waging an all-out war against transparency and whistleblowing (and the transparency groups who obsequiously awarded Obama a transparency award [one accepted in secret] are as disgraceful as the five Norwegians who awarded him the Nobel Peace Prize as he continues to do things like this).  The persecution of WikiLeaks -- for engaging in the crux of investigative journalism -- along with anyone who supports it is one particularly dangerous weapon in that war.  And anyone who defies or resists that war deserves, and will need, ample public support.


UPDATE:  The New Yorker's Jane Mayer echoes The Washington Post report linked above in reporting that the Obama DOJ's espionage prosecution of NSA whistleblower Thomas Drake is "crumbling." Mayer writes that "the government has been scrambling to find a way to avoid the trial now scheduled for next Monday" and that -- after indicting him on 10 felony counts, including espionage -- "the government has offered Drake the possibility of pleading to a misdemeanor, with no jail time," an offer he refuses to accept if it means admitting wrongdoing.  But the benefit of prosecuting whistleblowers endures even if the case crumbles because (as is true for the criminal investigation of WikiLeaks) it is legally frivolous: namely, it still serves as a thuggish deterrent to future would-be whistleblowers thinking about exposing government corruption, deceit and illegality.