Why is it a career killer if Huma Abedin is carrying his child? 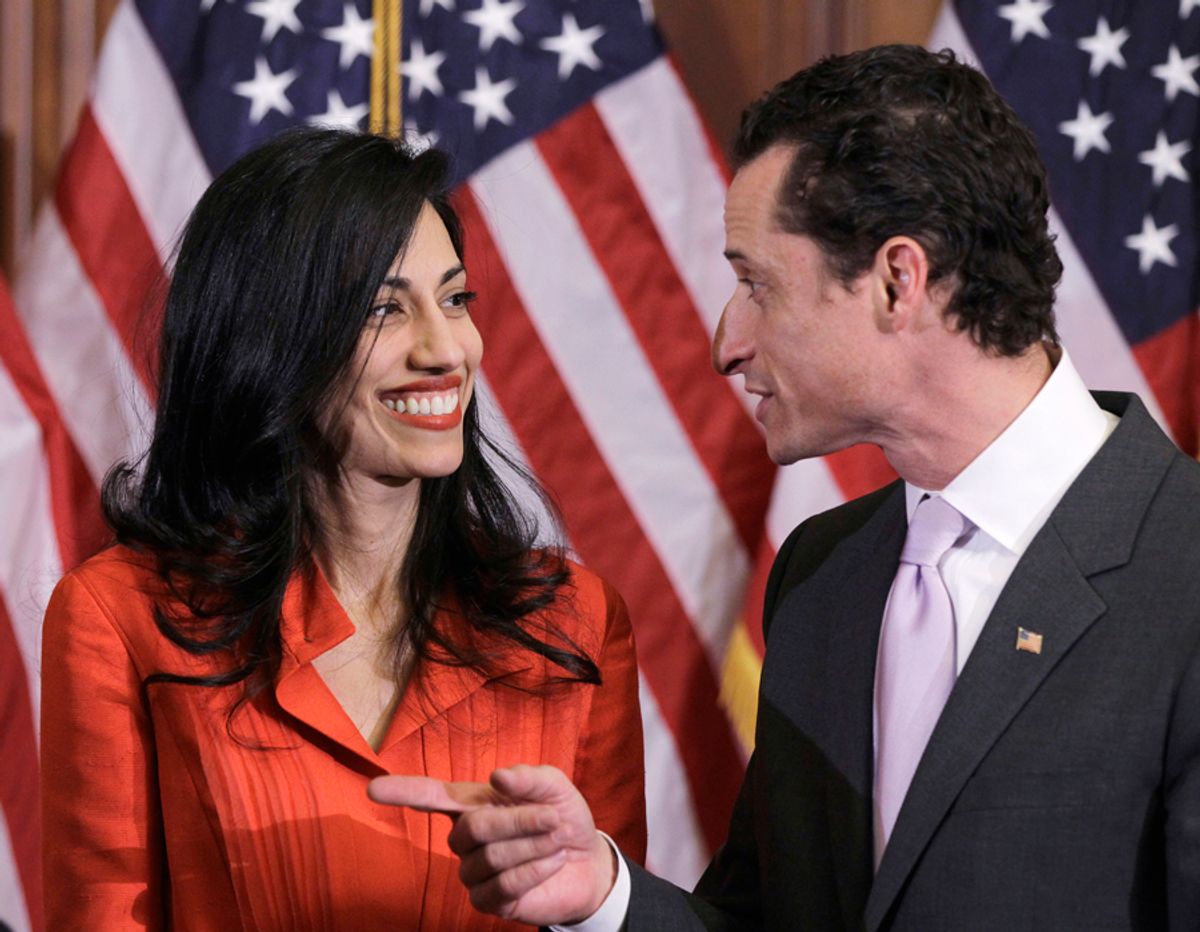 Rep. Anthony Weiner, D-N.Y., and his wife, Huma Abedin, an aide to Secretary of State Hillary Rodham Clinton, are pictured after a ceremonial swearing in of the 112th Congress on Capitol Hill in Washington in this photo taken Jan. 5, 2011. (AP Photo/Charles Dharapak) (Charles Dharapak)
--

What do you say about an impending visit from the stork when the father-to-be has been tweeting crotch shots of himself to his constituency? Somehow, mazel tov just doesn't cut it.

When the New York Times reported Wednesday that three sources close to Anthony Weiner's wife, Huma Abedin, confirm she is "in the early stages of pregnancy," it drastically changed the nature of the Weiner story, and his public determination to stay in office. In an instant, Weiner's teary-eyed apology "for the pain this has caused my wife, Huma, and our family" took on a new resonance, the already insistent drumbeat of calls for his resignation became all but deafening, and the tawdriness of his escapades seemed all the more pathetic. Why? Because on Monday, Anthony Weiner was just a predatory jerk with a bulge. But on Wednesday, he became, apparently, a predatory dad with bulge.

Unlike other high-profile politicians and fathers undone by a zesty secret sex life -- Bill Clinton, Mark Sanford and Eliot Spitzer easily leap to mind -- Weiner can't conform to the image of the harried dad looking to scratch a seven-year itch. Instead, he now falls closer to John Edwards on the perceived awfulness scale -- a man who, at a critical moment in the life of the woman he'd pledged to love and cherish, didn't just sexually betray her; he acted like a panicky, Class-A narcissist.

Those of us who've ever planned parenthood know what a mighty leap of faith it is. There's the fear that you won't achieve a healthy pregnancy. There's the terror of the consequences if you do. Even in the best of circumstances, it's a stone freakout. It can also be, especially in the case of a first pregnancy, one of the most romantic, tender, intimate periods in a couple's life. So the timing of Weiner's particular expression of his pre-fatherhood nerves, which strongly suggests that he was prowling Facebook and Twitter for thrills and sending an unsolicited crotch shot to a fan while his wife was newly knocked up, is hard to get past.

Weiner has admitted "inappropriate conversations" over the past few years. But his prior life is and should be a private matter. If everybody who'd ever said something suggestive via email were kicked out of a job, American unemployment would be ever deeper in the toilet than it already is. Even his extramarital dalliances aren't a deal breaker. You can love someone, cheat on her, and still do your job.. It happens all the time. But if, as Genette Cordova asserts, she never had "any inappropriate exchanges"  with Weiner and, as he says, he sent that notorious underwear picture "as a direct message as part of a joke to a woman in Seattle,"  that suggests an unnervingly escalating level of compulsive, self-destructive activity.

His behavior also now drags a whole new person-to-be into his psychodrama, and leaves Huma Abedin inexorably entwined with him. There is no way around the fact that it's a big deal to have a man put a baby in you. And there is a vast gulf between couples who've endured bad behavior and marital storms without kids and those who've faced them with children. As a friend whose cheating husband divorced her before their child was a year old has put it, "I'll be at my son's wedding, I'll be a grandparent, and this man will be always be in my life." Remember the penis on the Opie & Andy show? That's what Huma Abedin is now saddled with.

A personal failing is not automatically career suicide, even in politics. Lots of people have done considerably grosser things than Weiner and  had flourishing careers. But his recent history suggests a guy who, at exactly the time in life one needs to man up, was instead crude and selfish and possibly outright harassing. It invokes the image of someone whose beautiful wife is looking at sonograms and battling morning sickness while he was taking off his shirt in his office. And it undermines, profoundly, that impassioned, dynamic crusader for justice New Yorkers once fell in love with. That man is gone. Now, Anthony Weiner is no longer Mr. Smith Goes to Washington. Today, he's just a tawdry babydaddy episode of Jerry Springer.