Pakistan army chief says US aid should be diverted 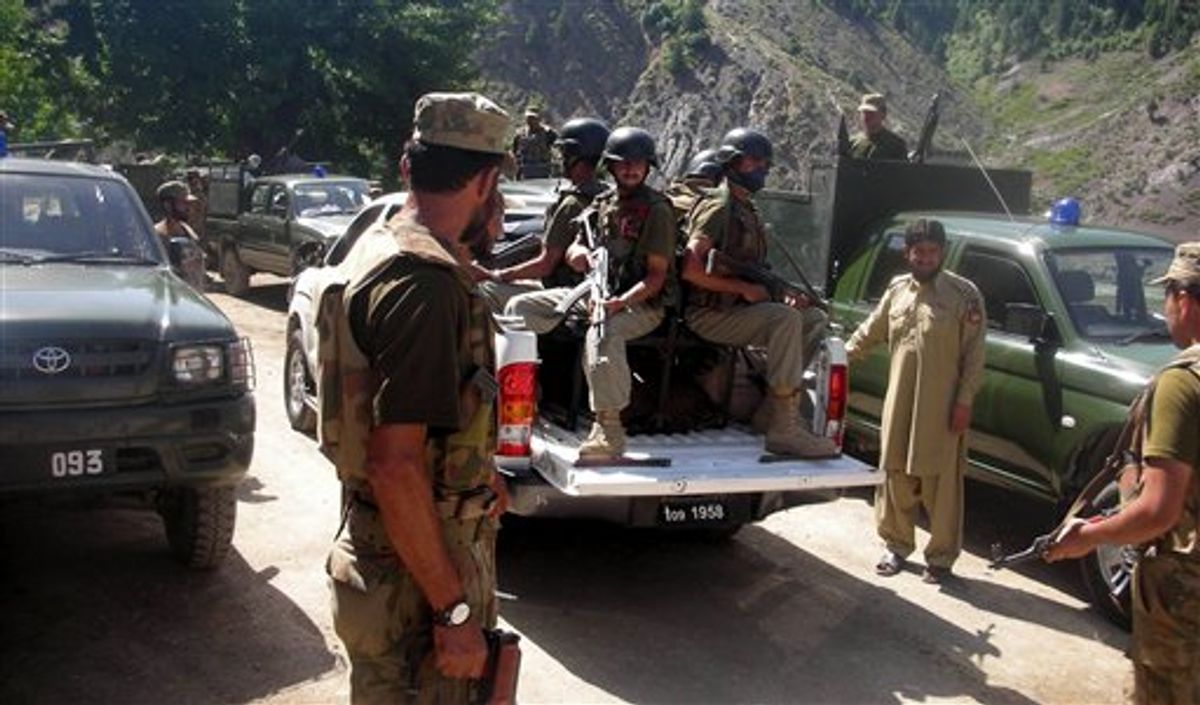 Troops of Pakistan army seen at Shaltalo in the Upper Dir region of Pakistan on Monday, June 6, 2011. Pakistani security forces had battles with militants in the Pakistani border town of Shaltalo along the Afghanistan border. Pakistani helicopters and artillery forced back militants who crossed over from Afghanistan and triggered battles that have killed many people, an official said. (AP Photo/Dilawar Jan) (AP)
--

Pakistan's army chief says billions of dollars in U.S. aid meant for the military's fight against Islamist militants should be diverted to bolster the economy and help ordinary Pakistanis.

The announcement could be seen as a snub to the U.S. and an attempt to bolster the military's popularity following the American raid that killed Osama bin Laden.

Gen. Ashfaq Parvez Kayani reiterated that the army has ceased its training relationship with the U.S. and has restricted the scope of intelligence sharing. He also said American drone attacks are unacceptable and declined U.S. calls for an operation in the militant-infested North Waziristan tribal area.

Kayani's positions were outlined in an unusually detailed statement issued Thursday after a meeting with his top commanders.

The attacks showed the strength of militant groups along Pakistan's border with Afghanistan despite Pakistani army offensives against them and U.S. drone-fired missile strikes. After four years of offensives, there are few signs the authorities have the upper hand.

The Taliban raid on the army checkpoint in the Marabi area of South Waziristan happened late Wednesday and two intelligence officials said 10 insurgents who took part in the attack also were killed when soldiers returned fire. The officials spoke on condition of anonymity, in line with their organization's policy.

The deadliest of the two bomb attacks Thursday occurred on the outskirts of the northwestern city of Peshawar in the Matani area, where several anti-Taliban militias are based.

The blast hit a passenger vehicle, killing four people, including a woman and a child, said Peshawar police chief Liaquat Ali Khan. The target was not immediately clear, but on Sunday another blast in Matani killed six people.

Pakistan supports anti-Taliban militias, which have been relentlessly targeted by the insurgents.

In 2009, the army launched a major operation against the Pakistani Taliban in South Waziristan. The army eventually declared victory in that operation but many of the insurgents fled to nearby areas, including neighboring North Waziristan.

This week, the U.S. launched five missile strikes that hit both tribal regions. A pair of drone-fired strikes on Wednesday killed 23 people in North Waziristan.

North Waziristan is the usual target for U.S. missiles because it is home to more groups who focus on fighting in neighboring Afghanistan and because the Pakistani military has resisted U.S. appeals to launch an offensive there. The army has preferred to pursue militant groups staging attacks on Pakistani soil.

Islamabad officially protests the missile strikes as violations of Pakistan's sovereignty, but it is widely believed to have secretly aided the program.

The May 2 U.S. raid that killed Osama bin Laden in Abbottabad, a garrison city in Pakistan's northwest, infuriated Pakistani lawmakers who saw it as another violation of their sovereignty. Pakistan's parliament passed a resolution demanding the missile strikes end, but the U.S. has ignored it.

In Pakistan's southwest Baluchistan province on Thursday, two police officers died and one was wounded when a roadside bomb exploded next to their vehicle in the Dasht area of Mastung district, local administrator Ismail Khan said.

No group immediately claimed responsibility, but Baluchistan has long been the scene of a low-level insurgency that aims to gain the province more independence and a greater share of the money from its natural resources.

Associated Press writers Anwarullah Khan in Khar, Riaz Khan in Peshawar and Abdul Sattar in Quetta contributed to this report.