One party to rule them all 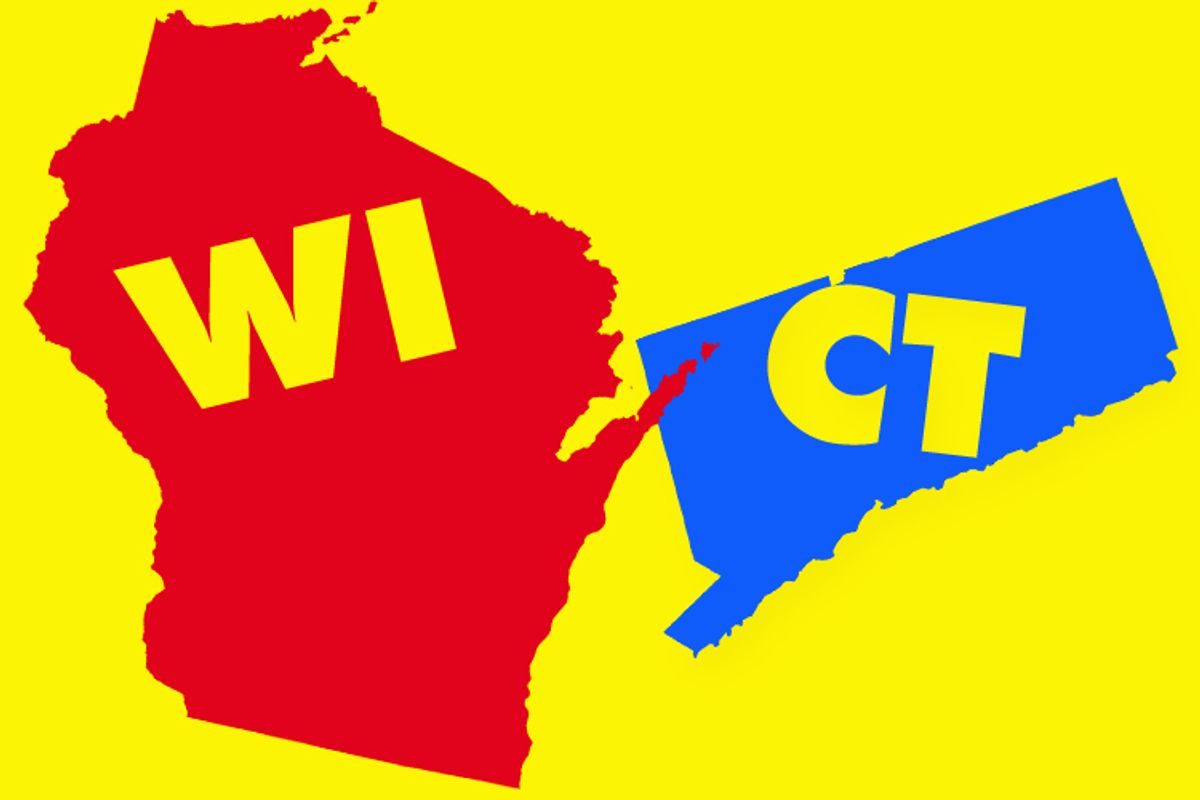 On Wednesday, The New York Times offered readers a fascinating look at the consequences of one party rule in two different states. In Connecticut, Democratic control of the governorship and state legislature have pushed through an agenda of higher taxes and extended social welfare safety net benefits that must make President Obama green with envy.

Lawmakers over the last several weeks have enacted the largest tax increase in Connecticut history and approved the nation's first law to mandate paid sick leave for some workers. They voted to extend protections for transgender people, to charge in-state college tuition rates to illegal immigrants, to extend an early-release program for prisoners and to decriminalize possession of small amounts of marijuana.

Meanwhile, in Wisconsin, Republicans, fearful that recalls will soon allow Democrats to take majority control of the state Senate, are racing to push through their own priorities.

In just the last few weeks, Gov. Scott Walker, a Republican, has signed legislation to require voters to show photo identification cards at the polls and to deregulate elements of the telecommunications industry. And the Republican-dominated Legislature is now in the midst of advancing provisions to expand school vouchers, to allow people to carry concealed weapons, to cut financing for Planned Parenthood and to bar illegal immigrants from paying in-state tuition at Wisconsin's universities.

There's some beautiful symmetry at work here. In Connecticut, illegal immigrants can pay for college at in-state tuition rates. In, Wisconsin, they can't! But I was particularly taken by the reaction to Connecticut's transformation from Christopher Healy, the state Republican Party chairman.

Never mind the looking-glass mirror through which conservative healthcare reform becomes "radical." The more interesting exercise is to compare  the radical-ness of Connecticut Democrats and Wisconsin Republicans.

For example, let's take a closer look at the how Connecticut is resolving its budget crisis.

On finances, the Legislature adopted a $40.1 billion budget that relies on $1.4 billion in tax increases, about $800 million in cuts and a projected $1.6 billion in union concessions on pay and benefits over two years.

Spending cuts and a tax hike, along with big concessions from public sector unions. Sounds more like a "grand bargain"  than a unilateral display of totalitarian Democratic power. In Wisconsin, by contrast, we saw spending cuts, tax cuts for the business community, and a massive assault on public sector unions -- including the end of their right to collective bargaining. No compromise whatsoever.

It applies only to businesses in service industries with 50 or more employees, and exempts nationally chartered nonprofit organizations, day laborers, independent contractors and temporary workers, providing the benefit to an estimated 200,000 to 400,000 workers, including waiters and nursing home aides. The bill was significantly watered down...

OK -- a bill with multiple exclusions, "significantly watered down," that may only affect 200,000 workers. This is radical? Again, it sounds as if the final product was shaped by considerable give-and-take.

Meanwhile, in Wisconsin, we've seen zero give-and-take. Instead, led by governor Scott Walker, Republicans are in a frantic hurry to push through the remainder of their agenda, in large part because the popular reaction against the initiatives Walker has already forced through is clearly jeopardizing the Republican hold on power.

And there's your most obvious difference between Connecticut and Wisconsin: Despite the "radical" Democratic agenda in Connecticut, there appears to be little in the way of a popular revolt in response. No mass demonstrations in the capitol and no recall efforts.

Now let's step back again and look at what's happening at the federal level. Both of Obama's major achievements -- healthcare and bank reform -- have been demonized as "radical" by Republicans, when in fact, in both cases, great effort was made to craft both legislative initiatives to attract conservative support. Indeed, both bank reform and healthcare reform were "significantly watered down" just to get the support of moderate Democrats. But if anyone has a hankering to see what true radicalism looks like, all they have to do is review the legislative agenda of House Republicans, and imagine what today's Tea Party-influenced version of the Republican party would attempt to accomplish if it controlled the Senate and the White House in addition to the House.

2010 Elections How The World Works Wisconsin