How our irrational fear of terrorism is costing us 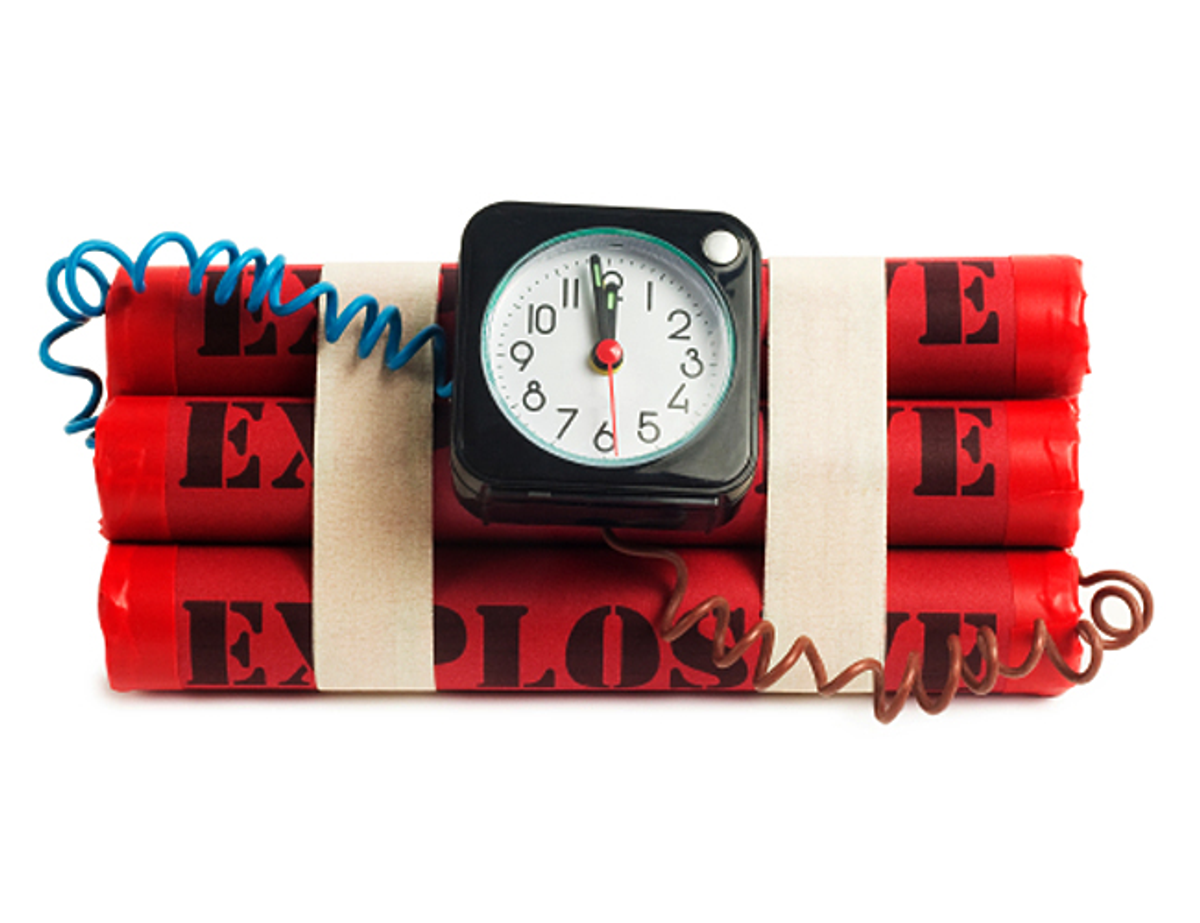 Here's a scenario to chill you to the bone:

Without warning, the network -- a set of terrorist super cells -- struck in northern Germany and Germans began to fall by the hundreds, then thousands. As panic spread, hospitals were overwhelmed with the severely wounded. More than 20 of the victims died.

No one doubted that it was al Qaida, but where the terrorists had come from was unknown. Initially, German officials accused Spain of harboring them (and the Spanish economy promptly took a hit); then, confusingly, they retracted the charge. Alerts went off across Europe as fears spread. Russia closed its borders to the European Union, which its outraged leaders denounced as a "disproportionate" response. Even a small number of Americans visiting Germany ended up hospitalized.

In Washington, there was panic, though no evidence existed that the terrorists were specifically targeting Americans or that any of them had slipped into this country. Still, at a hastily called news conference, Secretary of Homeland Security Janet Napolitano raised the new terror alert system for the first time from its always "elevated" status to "imminent" (that is, "a credible, specific, and impending threat"). Soon after, a Pentagon spokesman announced that the U.S. military had been placed on high alert across Europe.

Commentators on Fox News, quoting unnamed FBI sources, began warning that this might be the start of the "next 9/11" -- and that the Obama administration was unprepared for it. Former Vice President Dick Cheney, in a rare public appearance at the American Enterprise Institute, denounced the president for "heedlessly putting this country at risk from the terrorists." In Congress, members of both parties rallied behind calls for hundreds of millions of dollars of supplementary emergency funding for the Department of Homeland Security to strengthen airport safety. ("In such difficult economic times," said House Speaker John Boehner, "Congress will have to find cuts from non-military discretionary spending at least equal to these necessary supplementary funds.")

Finally, as the noise in the media echo chamber grew, President Obama called a prime-time news conference and addressed the rising sense of hysteria in Washington and the country, saying: "Al Qaida and its extremist allies will stop at nothing in their efforts to kill Americans. And we are determined not only to thwart those plans, but to disrupt, dismantle and defeat their networks once and for all." He then ordered a full review of U.S. security and intelligence capabilities and promised a series of "concrete steps to protect the American people: new screening and security for all flights, domestic and international;... more air marshals on flights; and deepening cooperation with international partners."

The first part of this scenario is, of course, a "terrorist" version of the still ongoing E. coli outbreak in Germany -- the discovery of an all-new antibiotic-resistant "super toxic variant" of the bacteria that has caused death and panic in Europe. Although al Qaida and E. coli do sound a bit alike, German officials initially (and evidently incorrectly) accused Spanish cucumbers, not terrorists in Spain or German bean sprouts, of causing the crisis. And the "disproportionate" Russian response was not to close its borders to the European Union, but to ban E.U. vegetables until the source of the outbreak is discovered.

Above all, the American over-reaction was pure fiction. In fact, scientists here have been urging calm and mid-level government officials have been issuing statements of reassurance on the safety of the country's food supply system. No one attacked the government for inaction; Cheney did not excoriate the president, nor did Napolitano raise the terror alert level, and Obama's statement, quoted above, was given on January 5, 2010, in the panicky wake of the "underwear bomber's" failed attempt to blow a hole in a Christmas day plane headed from Amsterdam to Detroit.

Ironically, non-super-toxic versions of E. coli now cause almost as much damage yearly in the U.S. as the recent super-toxic strain has in Europe. A child recently died in an outbreak in Tennessee. The Centers for Disease Control and Prevention (CDC) have estimated that earlier in the decade about 60 Americans died annually from E. coli infections and ensuing complications, and another 2,000 were hospitalized. More recently, the figure for E. coli deaths has dropped to about 20 a year. For food-borne disease more generally, the CDC estimates that 48 million (or one of every six) Americans get sick yearly, 128,000 are hospitalized, and about 3,000 die.

By comparison, in the near decade since 9/11, while hundreds of Americans died from E. coli, and at least 30,000 from food-borne illnesses generally, only a handful of Americans, perhaps less than 20, have died from anything that might be considered a terror attack in this country, even if you include the assassination attempt against Congresswoman Gabrielle Giffords and the Piper Cherokee PA-28 that a disgruntled software engineer flew into a building containing an IRS office in Austin, Texas, killing himself and an IRS manager. ("Well, Mr. Big Brother IRS man, let's try something different; take my pound of flesh and sleep well" went his final note.)

In other words, in terms of damage since 9/11, terror attacks have ranked above shark attacks but below just about anything else that could possibly be dangerous to Americans, including car crashes which have racked up between 33,800 and 43,500 deaths a year since 2001.

While E. coli deaths have dropped in recent years, no one expects them to get to zero, nor have the steps been taken that might bring us closer to the 100 percent safety mark. As Gardiner Harris of the New York Times wrote recently, "A law passed by Congress last year gave the Food and Drug Administration new powers to mandate that companies undertake preventive measures to reduce the likelihood of such outbreaks, and the law called for increased inspections to ensure compliance. The agency requested additional financing to implement the new law, including hiring more inspectors next year. Republicans in the House have instead proposed cutting the agency's budget."

Doctrines from One to 100

Here, then, is one of the strange, if less explored, phenomena of our post-9/11 American age: in only one area of life are Americans officially considered 100 percent scared, and so 100 percent in need of protection, and that's when it comes to terrorism.

For an E. coli strain that could pose serious dangers, were it to arrive here, there is no uproar. No screaming headlines highlight special demands that more money be poured into food safety; no instant plans have been rushed into place to review meat and vegetable security procedures; no one has been urging that a Global War on Food-Borne Illnesses be launched.

In fact, at this moment, six strains of E. coli that do cause illness in this country remain unregulated. Department of Agriculture proposals to deal with them are "stalled" at the Office of Management and Budget. Meanwhile, the super-toxic E. coli strain that appeared in Europe remains officially unregulated here.

On the other hand, send any goofus America-bound on a plane with any kind of idiotic device, and the politicians, the media, and the public promptly act as if -- and it's you I'm addressing, Chicken Little -- the sky were falling or civilization itself were at risk.

This might be of only moderate interest, if it weren't for the U.S. national security state. Having lost its communist super-enemy in 1991, it now lives, breathes, and grows on its self-proclaimed responsibility to protect Americans 100 percent of the time, 100 percent of the way, from any imaginable terror threat.

The National Security Complex has, in fact, grown fat by relentlessly pursuing the promise of making the country totally secure from terrorism, even as life grows ever less secure for so many Americans when it comes to jobs, homes, finances, and other crucial matters. It is on this pledge of protection that the Complex has managed to extort the tidal flow of funds that have allowed it to bloat to monumental proportions, end up with a yearly national security budget of more than $1.2 trillion, find itself encased in a cocoon of self-protective secrecy, and be 100 percent assured that its officials will never be brought to justice for any potential crimes they may commit in their "war" on terrorism.

Right now, even in the worst of economic times, the Department of Homeland Security, the Pentagon, and the sprawling labyrinth of competing bureaucracies that likes to call itself the U.S. Intelligence Community are all still expanding. And around them have grown up, or grown ever stronger, various complexes (à la "military-industrial complex") with their associated lobbyists, allied former politicians, and retired national security state officials, as well as retired generals and admirals, in an atmosphere that, since 2001, can only be described as boomtown-like, the modern equivalent of a gold rush.

Think of it this way: in the days after 9/11, Vice President Cheney proposed a new formula for American war policy. Its essence was this: even a 1 percent chance of an attack on the United States, especially involving weapons of mass destruction, must be dealt with as if it were a certainty. Journalist Ron Suskind dubbed it "the one percent doctrine." It may have been the rashest formula for "preventive" or "aggressive" war offered in the modern era and, along with the drumbeat of bogus information that Cheney and crew dished out about weapons of mass destruction in Iraq, it was the basis for the Bush administration's disastrous attempt to occupy that country and build a Pax Americana in the Greater Middle East.

There was, it turns out, a "homeland" equivalent, never quite formulated or given a name, but remarkably successful nonetheless at feeding an increasingly all-encompassing domestic war state. Call it the 100 percent doctrine (for total safety from terrorism). While the 1 percent version never quite caught on, the 100 percent doctrine has already become part of the American credo.

Thanks to it, the National Security Complex of 2011 is a self-reinforcing, self-perpetuating mechanism. Any potential act of terrorism simply feeds the system, creating new opportunities to add yet more layers to one bureaucracy or another, or to promote new programs of surveillance, control, and war-making -- and the technology that goes with them. Every minor deviation from terror safety, even involving plots that failed dismally or never had the slightest chance of success, is but an excuse for further funding.

Meanwhile, the Complex continually "mans up" (or drones up) and, from Pakistan to Yemen, launches attacks officially meant to put terrorists out of action, but that have the effect of creating them in the process. In other words, consider it a terrorist-creating machine that needs -- what else? -- repeated evidence of or signs of terrorism to survive and thrive.

Though few here seem to notice, none of this bears much relationship to actual American security. But if the National Security Complex doesn't make you secure, its 100 percent doctrine is by no means a failure. On the basis of ensuring your security from terror, it has managed to make itself secure from bad times, the dangers of downsizing, job loss, most forms of accountability, or prosecution for acts that once would have been considered crimes.

In fact, terrorism is anything but the greatest of our problems or threats, which means that acquiescing to a state dedicated to expansion on the principle of keeping you safe from terror is like making a bargain with the devil.

So suck it up. Nothing is secure. No one is safe. Now, eat your sprouts.