Gadhafi allegedly ordered rape be used as a weapon

A Libyan diplomat rejects the charges, but the ICC says there is evidence that troops were issued Viagra 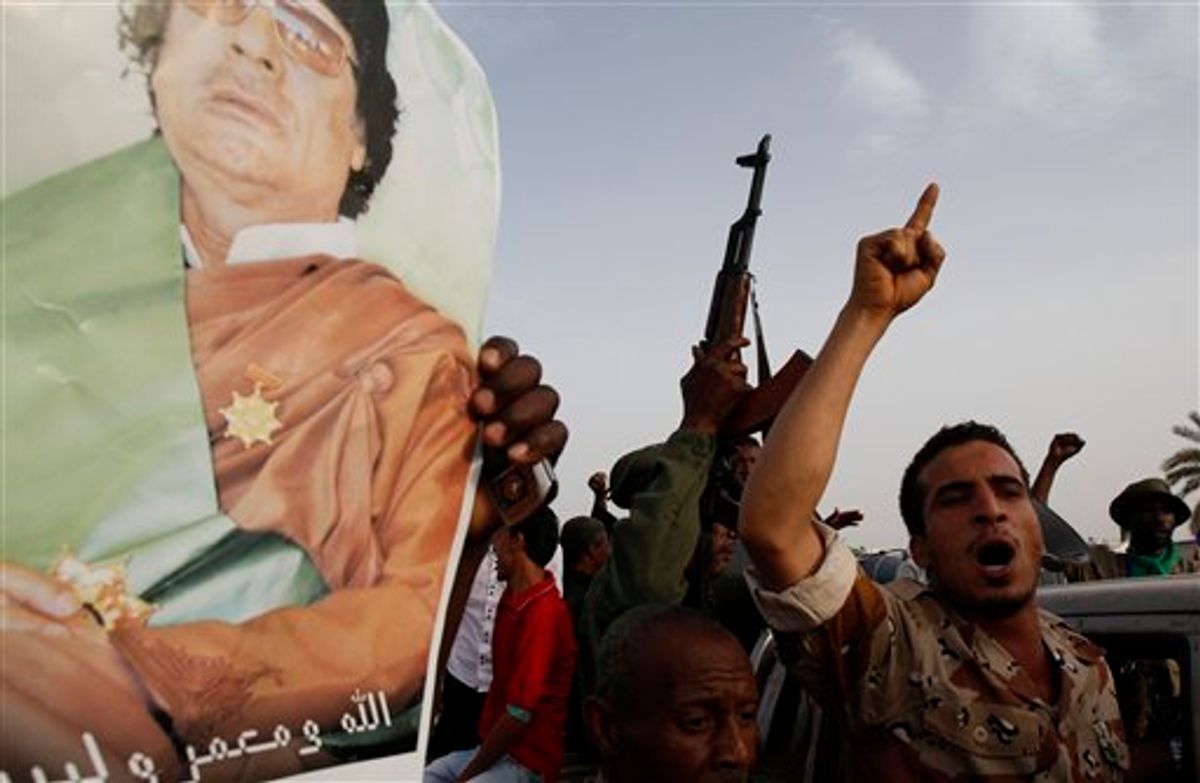 A Libyan man shouts as he and others rally next to Moammar Gadhafi's Bab al-Aziziya compound, a regular target of NATO airstrikes, in Tripoli, Libya, on Tuesday, June 7, 2011. Gadhafi has vowed to fight to the death in a surprise speech during the heaviest day of NATO shelling in the capital Tripoli. Gadhafi's voice suddenly emerged on Libyan television Tuesday afternoon _ barely an hour after the last of some 30 NATO strikes pounded the capital. He vowed "We will not kneel" and "We will not surrender!" (AP Photo/Ivan Sekretarev) (AP)
--

When we thought the litany of atrocities charged against Moammar Gadhafi couldn't get more shocking, news breaks that there is evidence that the Libyan leader ordered his soldiers to use rape as a weapon of war.

We are planning to add additional charges on rapes because we are collecting more information about Gadhafi's personal involvement in the attack in the use of rape as weapon to control civilians.

Moreno-Ocampo added that there is information that the government even supplied forces with Viagra (a drug the prosecutor recently likened in this horrific circumstance to a "machete"). In April, the U.S. ambassador to the U.N., Susan Rice, raised this issue, saying that some Libyan troops had been issued Viagra.

A Libyan diplomat rejected the charges when speaking to the U.N. human rights council on Thursday, the Guardian reported, but the ICC claims to have evidence, which is also backed up by many accounts from individuals, community organizers and local councils in Libya of rapes committed by government forces.

Speaking on Al Jazeera, Nigel Pont of Mercy Corps said that his organization -- which works in crisis response -- had heard "numerous reports" of rape. Pont emphasized the need to put systems in place in Libya to help the rape victims, many of whom fear speaking out about their ordeals.

In March, a Libyan woman, Eman al-Obeidi, caught media attention when she burst into a Tripoli hotel and said she had been raped by Gadhafi's troops. She is currently in a refugee center in Romania, according to Al Jazeera.

Beyond this, as the BBC reported in late May, a number of Gadhafi's troops, once imprisoned, have claimed that their commanding officers forced them to commit gang rape -- potentially corroborating the ICC's charge that this was a strategy ordered from the top. "My impression was that the men were telling the truth," wrote the BBC's Andrew Harding, having spoken to two imprisoned soldiers who say they were ordered to gang rape four people.