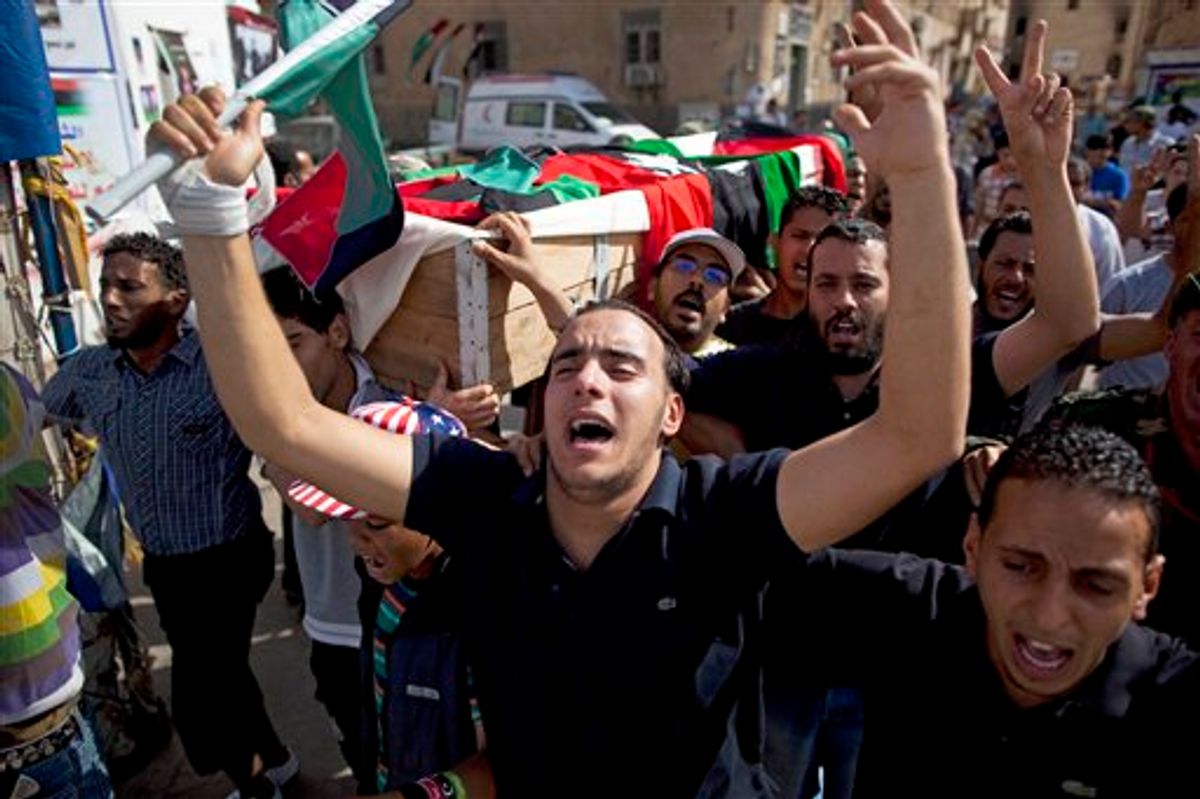 People carry the coffin of a rebel fighter killed on the front line against Moammar Gadhafi's forces during his burial next to the Transitional National Council headquarters in rebel stronghold Benghazi, Libya, Saturday, May 4, 2011. (AP Photo/Rodrigo Abd) (AP)
--

Maurizio Massari, a spokesman for the Italian Foreign Ministry, said from $438 million to $584 million will be provided in the form of soft loans and to pay for fuel. He says the money will help pay for the "day-to-day needs" of the Libyan rebels' National Transitional Council.

"We hope that as many countries will follow this path because we need to provide the TNC as soon as possible with financial help," Massari told The Associated Press.

The pledge provides a much needed boost to Libya's rebel national council, which has complained for weeks of dwindling funds and has been desperately seeking to secure loans and financial backing from its Western supporters to help shore up its finances.

Massari said that "timing is of the essence," and stressed that the rebels "don't need help in six months because at the end of the day, Libya is a rich country."

"When oil production starts, they won't need this help. They need this help now. We hope that our example will be followed by other countries of the contact group," he said.

The Italian pledge came as senior officials from the more than 30-member coalition met in the United Arab Emirates to prepare for the post-Gadhafi era in Libya. The national council said it wants foreign nations to provide it with an infusion of cash at the meeting. Without such offers, the council said the meeting would be "a "total failure."

No other country has offered up additional assistance, though the United States said Wednesday that the first shipment of Libyan oil sold by the national council had been delivered to an American refinery.

Spain on Thursday told reporters "it was already doing what it could do" in terms of helping the rebels. It also ruled out taking a greater role in the military operation, a day after U.S. Defense Secretary Robert Gates called for allies not directly involved in the operation to do more.

Gates called on Spain, Turkey and the Netherlands to enhance their limited participation in noncombat operations by joining in strike missions against ground targets.