It's time for shock jocks to disappear 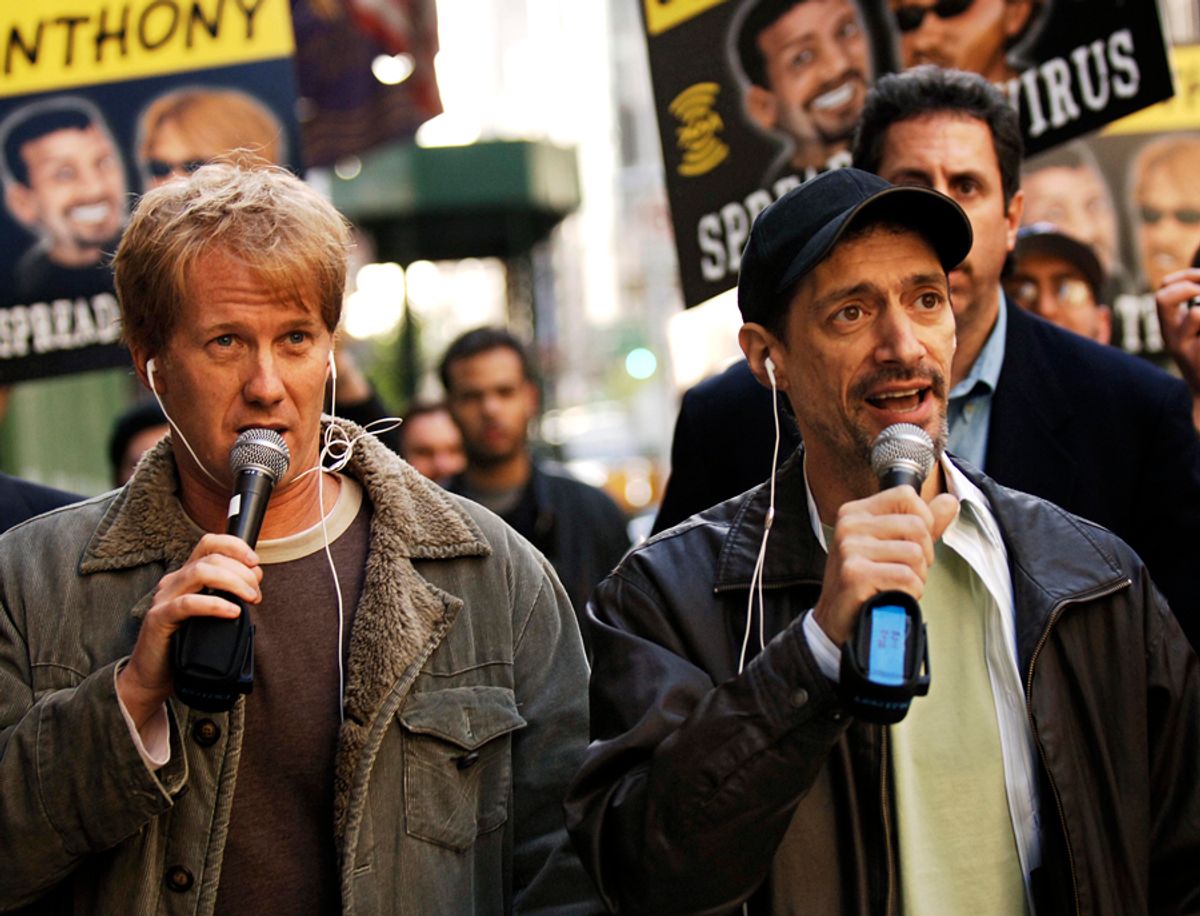 When an explicit photo of Anthony Weiner's purported package hit the Web Wednesday after Andrew Breitbart shared it on the Opie and Anthony show, America was stunned to learn that Opie and Anthony are still relevant. It turns out the only thing more persistent that Weiner's dong is the allure of the shock jock.

Gregg "Opie" Hughes and Anthony Cumia have never had the King of All Media cachet of Howard Stern, but like a slew of other radio bad boys, their infantile shtick has proved surprisingly durable. The duo, who've been coasting on their formulaic combination of "outrageous stunts, biting impressions and guest nutjobs" for 16 years now, have been fired, fined and canceled for their behavior -- yet still remain persistently on the air. Among their greatest hits: a 1998 April Fool's stunt in which they hilariously reported mayor of Boston Tom Menino had been killed in a car accident, a 2002 incident in which they encouraged a couple to have sex in St. Patrick's cathedral and broadcast their activities (a prank that cost them their nationally syndicated show), and a 2006 eggnog drinking contest that ended, predictably, with a contestant vomiting into somebody's mouth. (To their credit, though, they did get Louis C.K. to ask Donald Rumsfeld if he was a lizard from outer space.)

There's something both blatantly offensive and quaintly old-fashioned about the shock jock, and about the idea that men like Don Imus, who in 2007 referred to the Rutgers women's basketball team as a pack of "nappy-headed hos" or Bubba the Love Sponge, who said after last year's devastating earthquake in Haiti that the county "ought to tap the hooker market to get things back on track ... Maybe half a million Haitians that will end up not being around tomorrow ... it's a cleanse," are still gainfully employed.

You'd think after decades of FCC baiting and outrage inciting, the pee pee poo poo radio format would by now seem as dated as a 30-year-old copy of "Truly Tasteless Jokes," and as boring as, well, the jocks themselves. But it turns out that for a certain audience, sexist gags comparing women to toilets just never get old. In the age of Sirius, where jocks are at long last free to say "shit" on the air, the anything-goes douchebag seems downright indestructible. Oh, sweet freedom of speech! But what was perhaps once an outrageous, anarchic, rock 'n' roll style seems now just as lazy and bored as a hooker in an on-air hot dog eating contest.

It's not that being vulgar and outrageous can't be fantastic. But Opie and Anthony possess none of the crazed jackassness of a Johnny Knoxville or the politically naughty brilliance of "South Park." Even Howard Stern, for all his Weiner press conference crashing, has the impassioned air of a man who occasionally balances his talk of blumpkins with an impassioned and very personal investment in First Amendment freedom.

Compare any of that with what went down when serious journalist/possessor of cellphone penis shot Andrew Breitbart says his hosts "used a surveillance camera that's in the room and did a screen grab of it and put it out there. These people have admitted that they did this surreptitiously and illicitly and they lied in the process saying that they didn't even have a camera in the place." It's an unusual assertion, given the fact that it appears his visit to the show was being openly recorded, but "Opie" Hughes likewise asserts that "Breitbart did not want this picture to be released." Perhaps Breitbart had confused a show that has conducted Christmastime "homeless shopping sprees" with the Jim Lehrer "NewsHour."

Of their Weiner-tweeting shenanigans, "Opie" Hughes took to YouTube Wednesday to explain that after a fan grabbed an image off the video and sent it to them, "It was a race to see who could tweet the picture the fastest. That's exactly what we did. Unfortunately I don't think we were thinking."  That's them in a nutshell. There's no joke there, no punch line, not even a question. Just a bunch of guys sitting around, looking at another guy's penis and laughing. That's long past the point of being shocking, and it sure as hell isn't funny. It's just pathetic. And very, very tired.