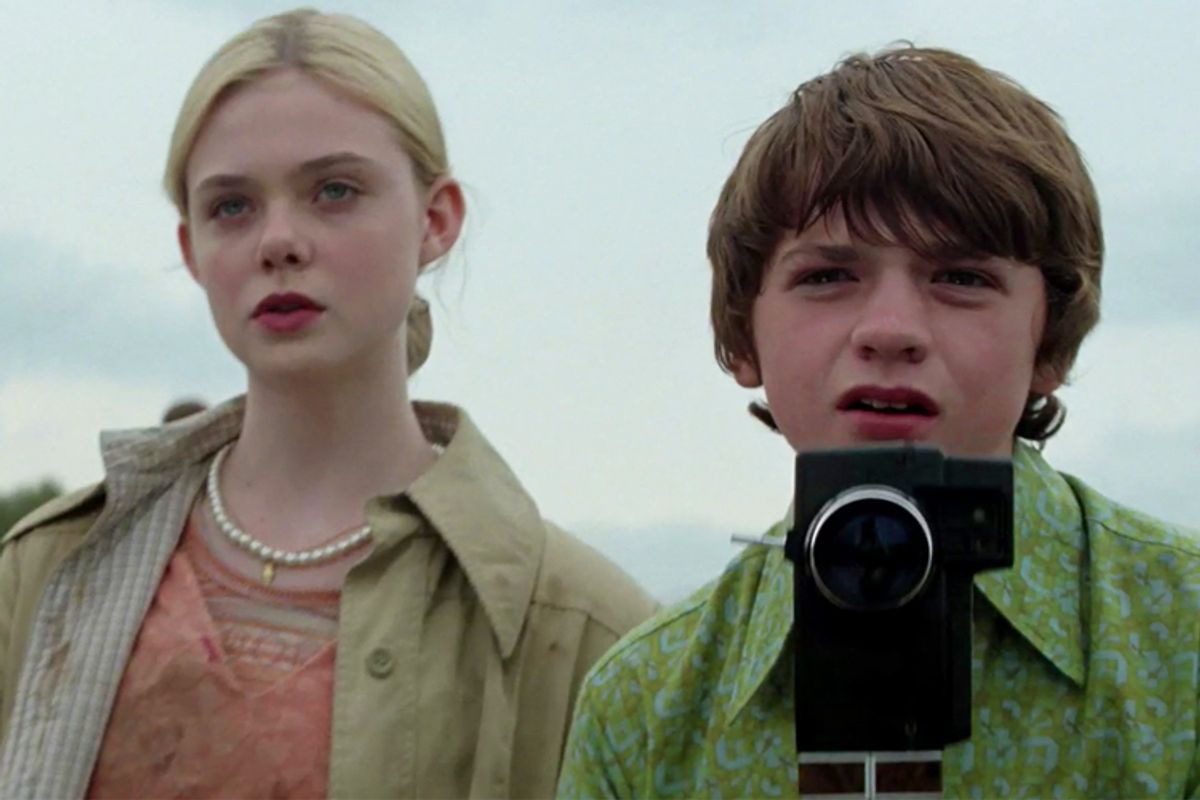 So "Super 8" is more like a mannered impression of a great '70s summer movie than the real thing, but that makes it just about perfect for our age of simulated sincerity. It's an expertly constructed thrill ride with wonderful atmosphere and tremendous good humor; if its heart of gold is artificial, that won't stop you from enjoying the heck out of it. This much-hyped collaboration between writer-director J.J. Abrams and producer Steven Spielberg, who have known each other since Abrams was a child, is such a meta-conscious movie-movie fugue state that it goes well beyond concepts like homage or tribute into realms like "demonic possession" or "priestly ritual."

As you probably know by now, "Super 8" is a monster movie about a group of small-town kids in 1979 Ohio who are making a monster movie, and I guess it's that faint touch of postmodernism that makes it not exactly like a Spielberg project that didn't quite get made 30 years ago. Otherwise, the Spielbergian impersonation is uncannily complete, from the half-disillusioned, half-idealized portrayal of chaotic suburban family life to the secret confraternity of kid culture to the faint stirrings of political correctness to the overdetermined, almost architectural sentimentality of the last act. I kept fighting off the feeling that "Super 8" had actually been made by, say, Michael Haneke or David Lynch, in an opaque conceptual-art spirit of mockery. Or that some form of illicit horror-movie congress has occurred between director and producer: They merged, like the two women in Bergman's "Persona." Or Abrams has eaten Spielberg's brain and is wearing his skin.

Anyway! Short version of all that: Fun movie, but an odd viewing experience. Across all his film and TV work ("Lost," "Star Trek," etc.), Abrams has distinguished himself as an expert craftsman without a distinctive artistic signature, so perhaps it's fitting that his most autobiographical work is so strongly in another filmmaker's style. "Super 8" looks tremendous; it's a beautiful widescreen picture (complete with presumably intentional lens flares, à la "Close Encounters of the Third Kind"), rich in detail and atmosphere, that captures its "My Sharona" era and small-town setting without overdoing it. (Hearing the Commodores' "Easy" in the background at some mediocre "fine dining" establishment almost gave me hives.) The cinematographer is Larry Fong, a first-rate young Hollywood talent who shot a lot of "Lost" and made "Watchmen" and "Sucker Punch" with Zack Snyder.

Instead of Spielberg's Southern California 'burbs, we're in the beaten-down, muscle-car-infused Rust Belt town of Lillian, Ohio, where young protagonist Joe Lamb (the screen debut of teen actor Joel Courtney) has just lost his mother in a grotesque industrial accident, as we learn in a wrenching, compact prologue. Joe's distant, uncommunicative dad, Jackson (Kyle Chandler of "Friday Night Lights"), is a sheriff's deputy and, fortunately for our story, a darn good one. But he's not the world's most empathetic pop; he wants to ship the dreamy and sensitive Joe off to baseball camp for six weeks rather than let him shoot a Super 8 zombie movie with his portly aspiring filmmaker pal, Charles (Riley Griffiths).

All the kid actors in this film are terrific and unaffected performers -- seriously, for all the ways that American movies have arguably gotten worse, child acting is way better than it used to be -- and Abrams' script lovingly captures the in-between character of early teen existence. Griffiths and Courtney may get the best scene of all, when they must confront the fact that both of them made the movie mostly so they could get to know the alluring Alice (Elle Fanning), who plays the lead -- and then must face a major plot twist seconds later. As for Fanning, everybody who saw her in "Somewhere" or "Reservation Road" or "The Curious Case of Benjamin Button" knows what a scary-good actress she has become at a tender age (she's now 13), and Abrams uses her obvious professionalism and air of being older than the boys around her to killer effect in the movie-within-a-movie here.

I won't spoil that terrific moment for you, except to say that it's one of the occasions when some powerful emotion sneaks through the pretty, pop, halfway arch surface of "Super 8." Oh and yeah, there's other stuff I'm not supposed to talk about too. Stuff that, by the way, is totally not surprising at all once you understand the movie's basic setup. Joe and Charles and Alice and the rest of their junior-high moviemaking team head to the town's railroad depot one summer midnight to shoot a crucial scene, where they miraculously survive (and accidentally record) a horrendous train wreck that seems to have been caused on purpose by their science teacher. When the Air Force appears out of nowhere, led by Noah Emmerich as a standard-issue villainous military spook, and enforces a clampdown on Lillian, it becomes clear there was something on the train that nobody's supposed to talk about or know about.

If the mystery turns out to be exactly what you think it is -- and for all intents and purposes it's a darker-hued borrowing from Spielberg's biggest hit -- "Super 8" is definitely about the journey and not the destination. Abrams does an excellent job of withholding precise information about what's going on in Lillian, and builds an M. Night Shyamalan mood of chaos and menace. All the dogs have fled town. Electrical wire is ripped off power company poles; engines disappear out of cars and microwaves out of appliance stores. There's a terrifically creepy confrontation between the sheriff and the unknown thingummy at a lonely gas station, complete with excerpts from Blondie's "Heart of Glass." In a pitch-perfect town meeting, one lady expresses the dominant mode of paranoia: "Unless you can tell me who's been messing around with our stuff, I think it's the Soviets."

Well, no, it might not be the Russkies, but it might just be that a gang of plucky kids obsessed with model-building and George A. Romero movies might be able to solve the mystery and heal the ruptures in the adult world that are tearing Lillian apart. And if there were dangers to be faced and, let's say, entities to be communicated with and beautiful damsels to be rescued on the way to a conclusion that's so melodramatic and sentimental and all-out magical that it's like Spielberg in drag, well, Joe and his buddies might be the guys for that too. Throw in some Keep on Truckin' posters and a little of "Le Freak" and a range of references that includes 9/11 pre-echoes and the "Phantasm" horror movies and "Stand by Me" and Stephen King's "It" -- there's nearly as much King in here as Spielberg -- and you've got a misshapen, lovable monster of a summer good time.