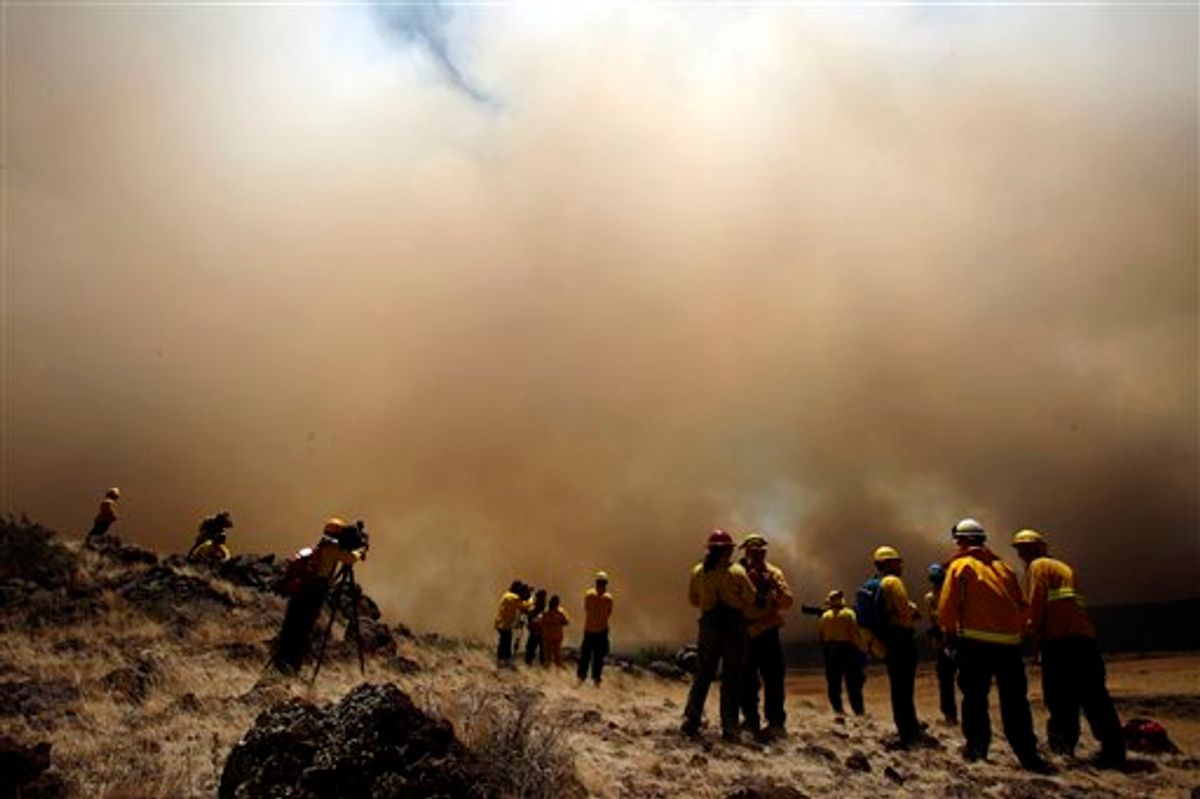 Members of the media watch the Wallow Fire from a ridge outside of Eagar, Ariz., Wednesday, June 8, 2011. A raging forest fire in eastern Arizona has scorched an area the size of Phoenix, threatening thousands of residents and emptying towns as the flames race toward New Mexico. (AP Photo/Marcio Jose Sanchez) (AP)
--

Fire crews worked through the night to protect several Arizona mountain communities from a growing forest fire that has forced thousands from their homes and threatens transmission lines that supply electricity as far east as Texas.

The 607-square-mile blaze, the second largest ever in Arizona, is expected to reach the power lines as early as Friday. If the lines are damaged, hundreds of thousands in parts of New Mexico and Texas could face rolling blackouts.

Meanwhile, crews were hopeful that they could slow the fire Thursday if weather predictions hold true. After a few days of driving winds, there was no high-wind warning issued for Thursday.

However, fire officials spoke guardedly late Wednesday as they faced the 12th day of the fire fight.

"Don't get complacent just because we don't have a red flag warning. Ten to 15 mph winds are good winds to drive fire, especially through grass, so we're going to have to be very careful," fire information officer Jim Whittington said at a late night briefing Wednesday at a rest stop on the edge of Springerville.

Residents remaining in Springerville and the neighboring community of Eagar were evacuated Wednesday as a spot fire popped up on the northwestern edge of the Wallow Fire. That caused officials to worry about the prospect of the fire hooking around a bulldozer line and a burned out area and racing toward town.

At Reed's Lodge along Springerville's main street, Daric Knight was still there late Wednesday afternoon to make sure no embers landed on the wood shingles at the front or elsewhere on the property. Knight's family has owned the lodge for decades.

"I've seen lots of fires, but nothing like this," he said.

About 7,000 people live in Springerville, Eagar and surrounding areas, although many already had left before the sheriff ordered the full evacuation.

The blaze has blackened about 389,000 acres and destroyed 11 buildings, primarily in the Apache-Sitgreaves National Forest. No serious injuries have been reported.

Whittington said the fire did grow Wednesday, but an updated acreage figure wouldn't be available until Thursday morning.

Firefighters planned to assess the area at daybreak, particularly around the mountain resort community of Greer, and would know then whether any additional structures had burned.

Firefighters had spent the past two days trying to create a line where they could defend the towns. They used bulldozers to scrape off vegetation and hand crews to remove other fuels. The line hasn't been breached, but officials were still worried about spot fires.

Crews on the ground have had help from more than a dozen helicopters. More help will be available from the air Thursday, when a 747 super tanker was expected to arrive.

The company uses two high voltage lines to bring electricity from the Palo Verde Nuclear Generating Station west of Phoenix to the two states. Losing the lines would cut off about 40 percent of the utility's supply, possibly triggering the rolling blackouts among its 372,000 customers.

The blaze, burning in mainly ponderosa pine forest, was sparked May 29 by what authorities believe was an unattended campfire. It became the second-largest in Arizona history on Tuesday.

It has cast smoke as far east as Iowa and forced some planes to divert from Albuquerque, N.M., some 200 miles away.

Officials in Catron County, N.M., told residents of Luna to be prepared to leave if winds push the blaze into western New Mexico.

Thousands of firefighters, including many from several western states and as far away as New York, are helping. Their focus includes protecting the mountain towns, including Alpine, Nutrioso and Greer.

Whittington said Wednesday was a rough in the Greer area when flames raced down the canyon and forced firefighters to change positions.

"It was pretty hairy. The firefighters did a good job," he said.

With a blaze as large as this being driven by unpredictable and gusty winds, putting the fire out is a gargantuan task. All fire managers can do is try to steer it away from homes and cabins by using natural terrain, burning out combustible material first and trying to put out spot fires sparked by embers blowing in front of the main fire front.

"We have a fire fight on our hands. It's going to be tough and we're going to be here a while," Whittington said.

Another major wildfire was burning in southeastern Arizona, threatening two communities. The 181-square-mile Horseshoe Two fire has devoured 14 structures, including three summer cabins since it started May 8. Fire officials say the 116,000-acre blaze is 40 percent contained.

Arizona's largest blaze came in 2002 when flames blackened more than 732 square miles and destroyed 491 homes west of the current fire. A fire in 2005 burned about 387 square miles in the Phoenix suburb of Cave Creek and consumed 11 homes.

Christie reported from Phoenix. Associated Press writer Mark Carlson in Phoenix contributed to this report. Susan Montoya Bryan can be reached at http://twitter.com/susanmbryanNM