How would Weiner do on Grindr?

The congressman's photos may have been embarrassing, but on gay hook-up sites, they would have fit right in 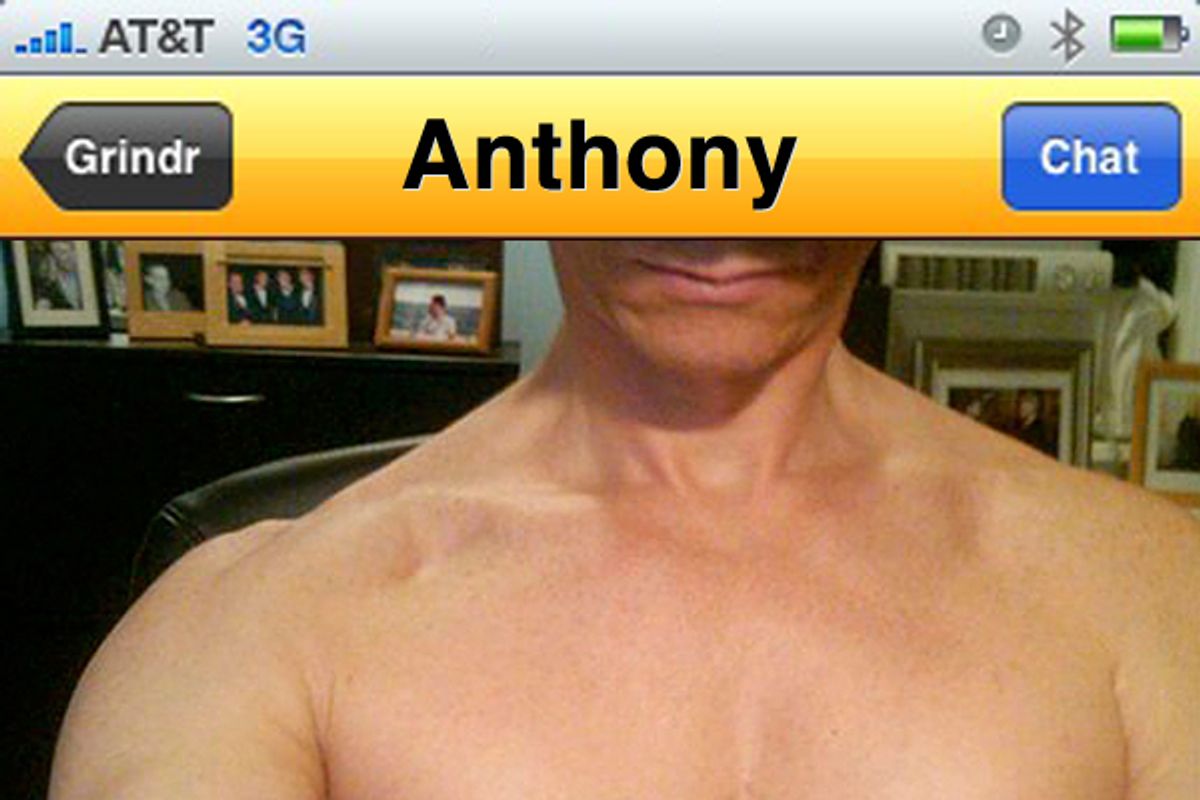 As Anthony Weiner's leaked photos have been endlessly circulating in the media, one question has been popping up again and again: Who, in God's name, would have found them sexy in the first place? For most women, it seems, receiving a headless photo of a flexing man or a close up of an erection is about as arousing as finding a toilet brush in your mailbox. But one of the most noteworthy things about those photos, aside from the fact that they reeked of pathetic narcissism (and that Anthony Weiner, clearly, works out) is that they looked almost identical to the countless photos that exist on gay hook-up sites and apps, like Manhunt and Grindr.

So if you're still wondering who could have been turned on by that photo of Weiner clenching his chest, the answer is: Gay men.

Over the last decade, gay hook-up sites have completely changed the way that gay men find each other, interact with each other, and have sex with each other -- and many of them are premised on the posting of photos very similar to Weiner's. Manhunt, one of the most popular of these sites, is primarily a catalogue of men looking for sex in your particular neighborhood. Click on any man's profile picture and it will take you to an description of their interests, height and penis size, among other details, and a trove of photos of them kissing their biceps or lounging around their apartments in their underwear or doing bicep curls in their jacuzzis or, often, pictures of their erect penises. You can chat with other men on the site, exchange photos and then, if you're interested, meet up to have sex or go on a date.

And Manhunt is just one of many sites and applications that fill this purpose. Dudesnude is a dating and social networking site premised entirely around people posting naked pictures of themselves. Big Muscle and Big Muscle Bears do the same for, respectively, gym queens and gym queens with body hair. And Grindr is a wildly successful iPhone app that allows gay men to hook up based on their current geographical location. Log onto Grindr and it'll tell you that there's a man 1,200 feet from you looking for someone with a hairy chest and a foot fetish. Each profile has information, like height and weight, but the most important thing is the photo. If you log onto Grindr in your apartment, your screen will fill up with a hundred men looking to connect with other men, an army of headless, flexing torsos.

In the Grindr universe, photos like Weiner's are constantly traded back and forth, partly to prove that men are who they say they are but also because they're a part of the flirtation process that precedes an actual flesh-and-blood meeting. What's a clearer sign that you're aroused by him than sending  a picture of your erection? And for some users, just the exchange of these kinds of intimate photos is an easy substitute for sex.

How would Anthony Weiner have done on Grindr? We uploaded Weiner's shirtless shot to a phone, and logged on in midtown Manhattan. Almost immediately, men started sending him messages. "More pics," one 31-year-old man, wearing an oversized baseball cap and standing on a beach, asked immediately. When Weiner responded with the image of himself posing with his cats, and then the picture of his bulging gray briefs, the man answered by asking Weiner's age, and sending a shirtless photo of himself in his underpants.

Over the course of the next 24 hours, Weiner's Grindr profile received six more messages from people who were intrigued and interested in potentially meeting up. Their entreaties ranged from a straightforward "hey handsome" to "where you at?" to a man sending a picture of himself upside down on a trapeze.

So why are gay men so much more receptive to these kinds of photos than straight women? It might be because men are simply more turned on by visual cues than women. (A point made by Cindy Meston in this interview with Tracy Clark-Flory.) It might be because gay male culture has always had a much greater emphasis on casual sex than the straight world, and if you're going to hook up with someone and never talk again, you're probably going to be more interested in what his chest looks like than how he feels about current events like, say, Anthony Weiner. Throughout much of gay history, men were only able to connect through furtive glances, behavior that remains firmly ingrained in the way we interact.

Ironically, one could actually also argue that Weiner's conspicuously hairless, gym-built torso is also the curious end result of this particular aspect of gay culture. The obsession with hyper-muscular torsos that emerged in gay culture in the  1980s helped foster a widespread obsession with the body that fed the metrosexual craze of the 1990s. Weiner's carefully sculpted, quite possibly waxed, torso belies a male vanity that would not have been acceptable before gay men managed to convince straight men that it was a good idea to spend $200 a month on a gym membership and go to a tanning salon.

As the revelations around the Weiner scandal keep getting more and more unpleasant, much of the remaining sympathy for him seems to be withering. But the fact is, in a different context, his actions wouldn't have seemed all that questionable -- and they probably would have gotten him laid.