The man who makes your old newspapers into art

For 25 years, a self-taught Caribbean sculptor has been shaping consumer waste into beautiful papier-mache pieces 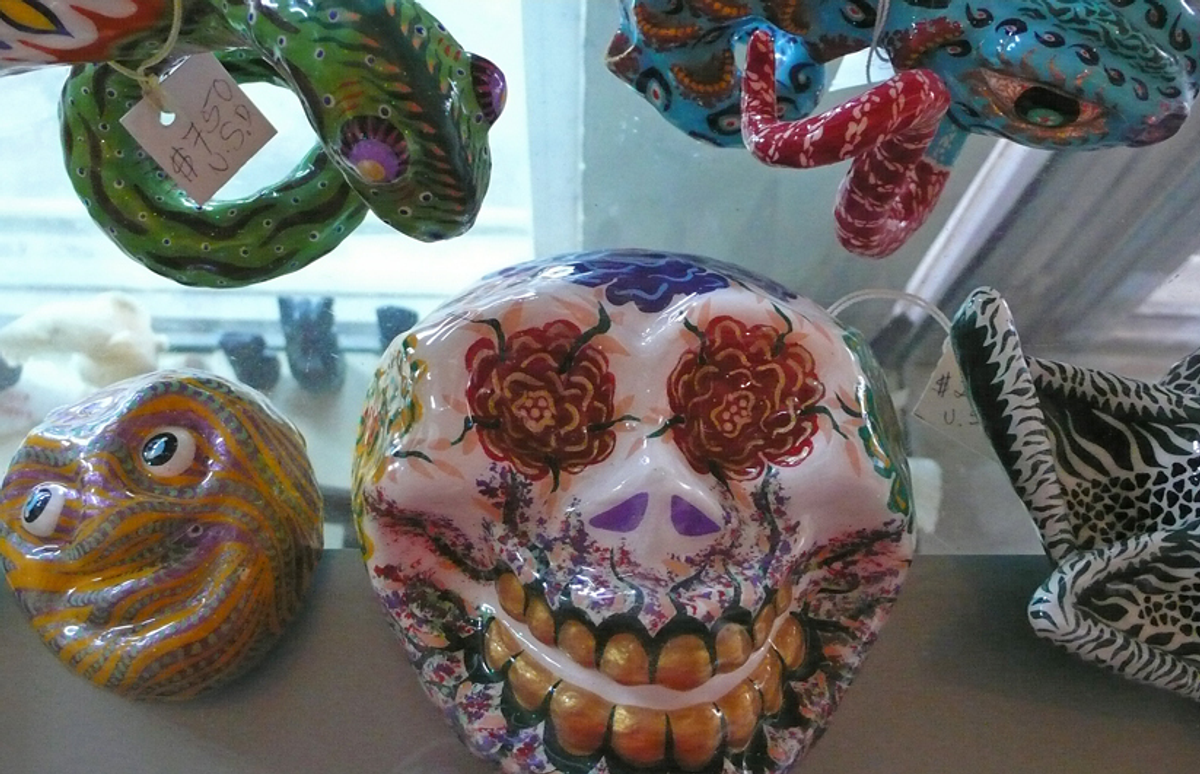 It is estimated that the average worldwide per-capita use of paper is 110 pounds per person per year.

On Isla Mujeres, Quintana Roo, a laid-back Caribbean island off the coast of the Yucatán Peninsula -- best known for good snorkeling and for sipping a slow cerveza under a palapa -- Emilio Sosa Medina recycles 10 times his annual paper allotment. A self-taught artist, he transforms yesterday's newspapers into papier-mâché sea monsters, lizards, dragons and masks based on Mayan iconography.

Emilio Sosa Medina in his Isla Mujeres studio, just a few blocks from the ferry that brings you from Puerto Juarez, a town that's half an hour from Cancún airport.

For 23 years, Sosa has been a one-man recycling plant. He estimates that each large sculpture requires 40 kilos (about 88 pounds) of newspaper, and that he uses about 1,500 pounds of it a year to create 30 to 40 pieces. Each is made of more than 20 layers of newspaper, painstakingly built up layer-by-layer on a wire frame, then painted with vivid acrylics and finished with clear polymer resin.

When the weather is nice, you'll find him working at a table right out on the street. Last week I watched him -- accompanied by his children and grandchildren -- apply strips of newspaper to his current major project, a many-tentacled sun. Inside the gallery, the walls and shelves were filled with an array of masks and fanciful creatures, which range in price from $50 for a mask to $13,000 for the largest and most elaborate pieces, 4 to 6 feet across.

Mayan civilization in the Yucatán reached its artistic peak from about 500 A.D. Sosa bases his masks on the faces of gods, snakes and animals that the Mayans crafted in jade and mosaic to intimidate the enemy in battle and protect the wearer physically and through spiritual power.

More than 15,000 pounds of newspaper are recycled each year.

The current major project is a sun god with octopus-like tentacles.

Sosa's work is also notable because over the past 25 years Mexican folk art has gotten increasingly commercialized, standardized and anonymous. Some might even say tacky, based on the tourist junk that abounds in shop after shop on Isla's main drag, Avenida Hidalgo. If you want to see (and buy) work that is authentic and original, you usually have to arrange to meet the artists, who often live far from tourist centers. Not so for Sosa, who chooses to stay put and enjoy life in a town that greets thousands of visitors a year. He told me that because he's not beholden to the system of wholesalers, agents and gallery owners, he can enjoy his work, support his family, stay independent, and help the planet in the bargain. What artist could hope for more?

Surface decoration is based on traditional Mexican pottery motifs introduced after the Spanish Conquest.

Pieces are pained with acrylics and finished with clear polymer resin.

"Artesanías Glenssy," Sosa's studio, is on Avenida López Mateos between Guerrero and Hidalgo, tucked between a portable taquería and the town cemetery -- also worth a visit -- a jumble of baroque crypts and miniature cathedrals decorated with bouquets of artificial flowers.