Pick of the week: Two British comics on a fine-dining tour in a side-splitting, casually brilliant guy flick 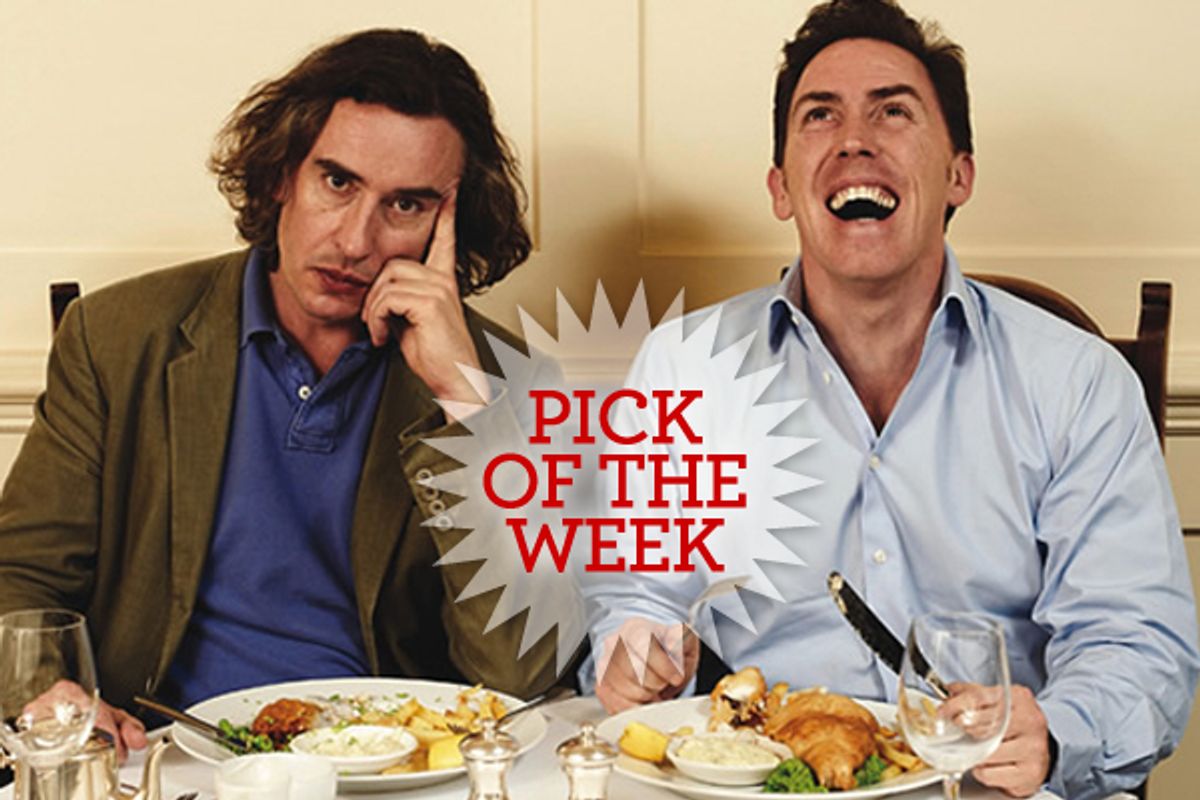 Steve Coogan is the one-man apotheosis of British comedy's translation problem. A household name in the United Kingdom, thanks largely to his TV persona as the intolerably dense and pompous chat-show host Alan Partridge, Coogan could most likely stroll through any American shopping mall in total anonymity (unless he encountered the Monty Python buffs gathered at the comics store). Sure, he played Octavius in the "Night at the Museum" comedies and Hades, god of the underworld, in "Percy Jackson & the Olympians: The Lightning Thief" -- but therein lies the problem, or one of them anyway. His biggest role in an American film, I believe, has been as the muumuu-wearing drama teacher in "Hamlet 2," an expensive and unfunny flop that everyone involved is eager to forget.

While his countrymen Russell Brand and Ricky Gervais have had their own problems rendering themselves suitable for American consumption, and arguably have dumbed themselves down a tad (or more), at least they're recognizably the same performers that they were at home, and offer rough approximations of their existing shtick. Coogan is a total superstar of British pop culture, and a supporting player in sub-mediocre Hollywood kids' movies. My abbreviated explanation for this, by the way, is that while Americans don't mind being made fun of, exactly -- see under Simpson, Homer -- Coogan's style of mockery is fundamentally unstable in a way that makes the Yank public uncomfortable. He's permanently taking the piss, as the British say, and his targets include the audience, himself, the characters he's playing, the movie or show he's in, the medium of stardom and pretty much anything else you like.

In Michael Winterbottom's rambling and dazzlingly funny "The Trip," which isn't quite a dramatic film or a documentary and doesn't belong to any other known genre either, Coogan gets to act out his American failure in a mixture of Freudian psychodrama and sympathetic magic. (I'm sure Winterbottom is aware of the legendary Roger Corman 1967 acid-sploitation flick of the same title, starring Peter Fonda and Bruce Dern, but beyond that I'm not sure what to say.) Playing himself, or at least a character called Steve Coogan, he spends much of the movie in unhappy phone conversations with his agents, turning down villain roles in second-rate movies and contemplating a seven-year commitment to an HBO medical drama. "I don't want to do British TV!" he whines at one point -- and that must have gotten a laugh on the first go-round, since "The Trip" began life as a six-episode BBC series, later edited into this theatrical film.

Coogan even has a dream in "The Trip" about a poolside idyll in Beverly Hills, where a fast-talking American agent played by Ben Stiller assures him that all the Stateside "auteurs" -- Wes Anderson, P.T. Anderson, Alexander Payne, the Coens, the Wachowskis -- want to work with him, before vanishing in unsatisfying, dream-image fashion: "I have to go! I have a thing! I probably won't talk to you later!" At least that one's better than the other dream, the one where a fan stops Coogan on the street to get his autograph and then shows him a hilarious tabloid headline, in which Coogan's dad refers to him with the all-purpose British epithet that American publications don't generally permit. (Coogan does indeed have a reputation in showbiz circles as a party animal, womanizer and all-around that word, and perhaps the best way to handle that is to go straight at it, as he does here.)

"The Trip" has played to packed houses at numerous film festivals, including Toronto last fall and Tribeca this spring. It's finally reaching theatrical and VOD release this week, and if you're a fan of British comedy in its most oblique, taking-the-piss form, it's a movie not to miss. Furthermore, it's not merely funny in a hilarious YouTube clip sort of way (although it's very funny in that way too). Winterbottom (also the director of "The Killer Inside Me," "The Road to Guantánamo" and "24 Hour Party People," among many other things) is an audacious and intelligent filmmaker whose work always deserves to be taken seriously, and never more so than when it appears to be offhand and not serious at all. Under the guise of being nothing more than a quasi-documentary about two comedians cutting up and scarfing gourmet cuisine, "The Trip" may be the wryest and most affecting of all the recent movies about middle-aged male angst.

The ostensible premise of the original BBC series -- and to some extent its actual premise, since the documentary elements are legitimate -- was that Coogan and Welsh actor and stand-up comic Rob Brydon would head out on a fine-dining tour of twee country inns across the north of England, so the former could cash in on a posh journalism assignment. They're not best friends or anything; Coogan calls Brydon only because Coogan's American girlfriend (Margo Stilley) has bailed out and gone back to New York after a semi-breakup. In fact they know each other's work much better than they actually know each other, and you can easily find Internet snippets of their dueling impressions: Michael Caine, most famously, but also Woody Allen, Al Pacino and various others. (Trust me: It's all better, and funnier, in the context of the movie.)

At the risk of needlessly complicating things, I should add that Coogan and Brydon have played "themselves" before, in Winterbottom's 2005 "Tristram Shandy: A Cock and Bull Story," which both was and was not an attempt to adapt Laurence Sterne's pre-postmodern 18th-century novel, and that "The Trip" is arguably a spinoff from or sequel to that movie. I think the right way to put it is that sometimes Coogan and Brydon really are playing themselves, sometimes they're playing caricatures of themselves, and sometimes they're playing stock British comedy figures. Brydon is the far more likable, self-effacing one, with a bit of a chip on his shoulder about being so much less famous. (And it's somehow perfect that he's best known for a weird little voice thing he does called "Small Man in a Box," which is now available as an iPhone app. You really couldn't make that up.) Coogan is of course the vainglorious ass, both the bigger star and the bigger failure, taking agents' calls about atrocious-sounding HBO pilots and going home to an empty London apartment. It's a brave and strange performance that purposefully smudges the distance between Steve Coogan and Alan Partridge.

Like "Tristram Shandy," "The Trip" is both what it's pretending to be -- in this case, a story about combative old friends taking a food-and-wine vacation; a sideways Anglo remake of Payne's "Sideways" -- and an attempt to rip away the veil of fiction and expose the backstage machinery of the entertainment industry and the everyday silliness of those who live in it. I end up feeling unsure whether Winterbottom is spoofing the spate of movies about self-pitying middle-aged guys or perfecting the genre, and I further suspect there's no difference. The casual, improvised, doesn't-matter quality of "The Trip" can't quite conceal how brilliant it is. This is an instant classic of British comedy, culminating in an a cappella duet of ABBA's "The Winner Takes It All" that will leave you weeping with laughter, and maybe just weeping.

"The Trip" is now playing in New York, with more cities to follow, and will be available on-demand from many cable and satellite providers beginning June 22.

Movies Our Picks The Killer Inside Me Woody Allen