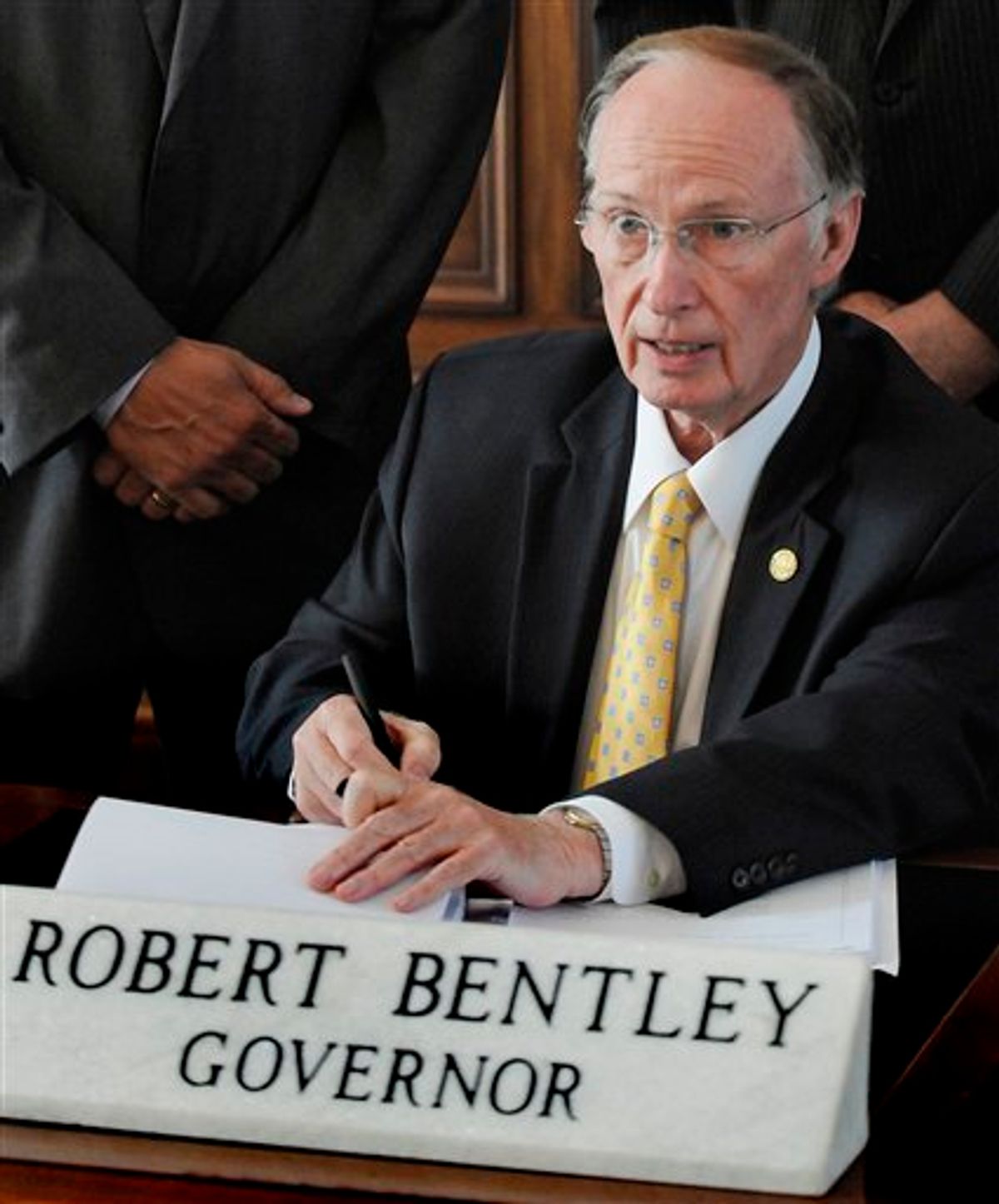 Alabama Gov. Robert Bentley signs into law, what critics and supporters are calling the strongest bill in the nation cracking down on illegal immigration, on Thursday, June 9, 2011 at the state Capitol in Montgomery, Ala. The bill allows police to arrest anyone suspected of being an illegal immigrant if they're stopped for any other reason. It also requires public schools to determine students' immigration status and makes it a crime to knowingly give an illegal immigrant a ride. (AP Photo/Montgomery Advertiser, Mickey Welsh) (AP)
--

Alabama schools will soon have to check if students are in the country legally and people stopped for any reason could be arrested on suspicion of immigration violations under a sweeping law being called the nation's most restrictive against illegal immigration.

Advocacy groups promised to challenge the sweeping measure signed by Gov. Robert Bentley on Thursday, which they call even more severe than the one in Arizona that is being challenged in court.

In addition, it requires all businesses to check the legal status of workers using a federal system called E-Verify and makes it a crime to knowingly give an illegal immigrant a ride.

"It is clearly unconstitutional. It's mean-spirited, racist, and we think a court will enjoin it," said Mary Bauer, legal director for the Southern Poverty Law Center.

Bentley expressed confidence it would withstand any legal challenges.

"We have a real problem with illegal immigration in this country," he said. "I campaigned for the toughest immigration laws, and I'm proud of the Legislature for working tirelessly to create the strongest immigration bill in the country."

Alabama has an estimated 120,000 illegal immigrants, a nearly fivefold increase from a decade ago, according to the Pew Hispanic Center. Many of them are believed to be working on farms, at chicken processing plants and in construction.

One of the legislation's sponsors, GOP Sen. Scott Beason, said it would help the unemployed by preventing illegal immigrants from getting jobs in the state. Alabama's unemployment rate stood at 9.3 percent in April, the most recent figure available.

"This will put thousands of Alabamians back in the work force," Beason said.

The Alabama Business Council has not taken a public stand on the law. In neighboring Georgia, some farmers and business owners warned that a crackdown passed recently in that state would make it more difficult to hire the laborers they rely on -- many of whom are illegal immigrants.

The Alabama measure instantly puts the state at the forefront of the immigration debate. Organizations such as the American Civil Liberties Union and the Southern Poverty Law Center agreed that it is the nation's toughest crackdown on illegal immigration.

"It is a sweeping attack on immigrants and people of color in general. It adds restrictions on education, housing and other areas. It is a very broad attack," Joaquin said.

Among other things, the law makes it a crime for landlords to knowingly rent to an illegal immigrant.

Another provision makes it a crime to transport a known illegal immigrant. Arizona's law appears narrower: It includes language against human smuggling and makes it illegal to pick up laborers for work if doing so impedes traffic.

Alabama's law also goes further in requiring schools to check the immigration status of their students. The measure does not prohibit illegal immigrants from attending public schools; lawmakers said the purpose instead is to gather data on how many are enrolled and how the much the state is spending to educate them.

Jared Shepherd, an attorney for the ACLU, warned that because of that provision, some immigrant parents may not send their children to school for fear of arrest or deportation.

Activists such as Shay Farley, legal director of Alabama Appleseed, an immigrant advocacy group, said the bill invites racial profiling not only by law enforcement officers but by landlords and employers.

"It's going to make us profile our neighbors and our church brothers and sisters," Farley said.

Some farmers and other small businesses had hoped to be exempted from having to verify the immigration status of employees, fearing the database would be too costly and add too much red tape. Georgia's law, by contrast, exempts businesses with fewer than 10 employees.

Alabama's measure was modeled on Arizona's. A federal judge blocked the most controversial parts of Arizona's law last year after the Justice Department sued.

That includes the provision that required police to check people's immigration status while enforcing other laws if there was reason to believe the person was in the country illegally. The case appears headed for the U.S. Supreme Court.

A less restrictive law in Utah also was blocked after a lawsuit was filed. Civil liberties groups have sued to stop Georgia's law as well.