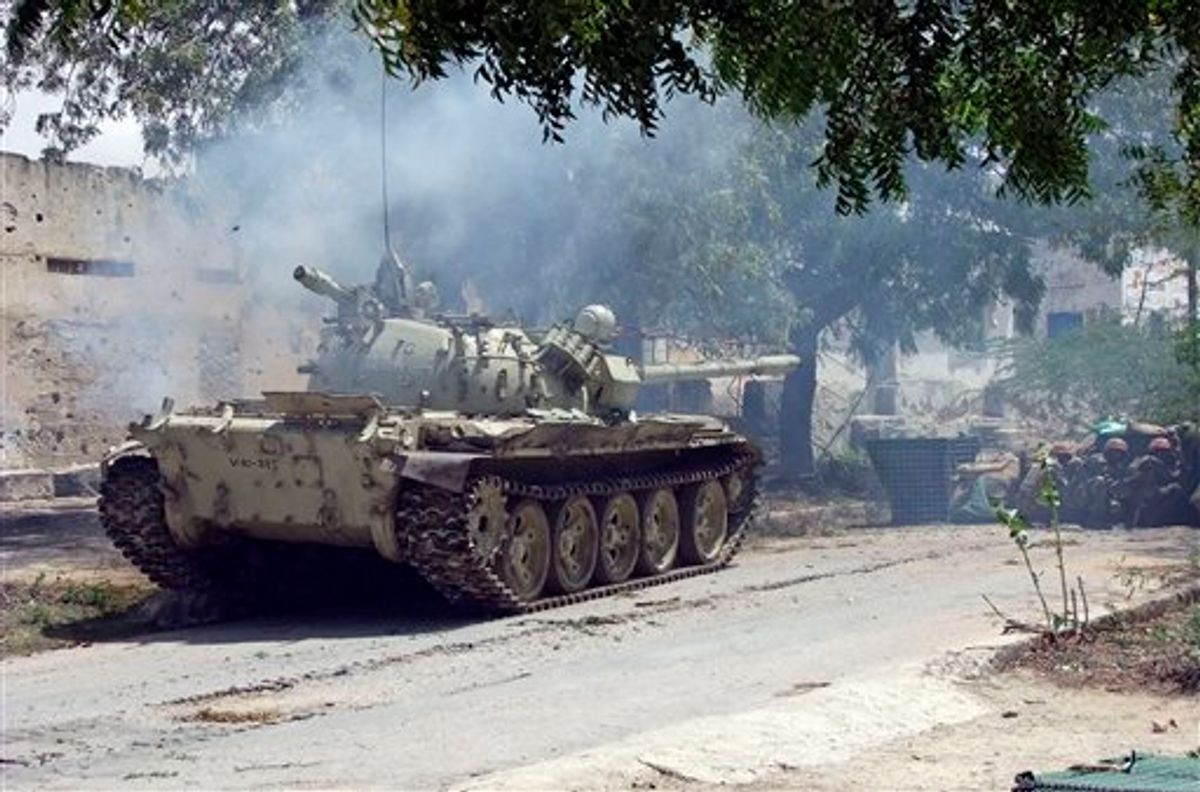 AU peacekeepers take cover behind sandbags, right, as AU tank standby during clashes with Islamist insurgents in southern Mogadishu's Bakara market neighborhood on Friday, May 27, 2011. The U.N. Security Council is warning Somali leaders that they risk losing financial support if they can't agree on how to carry out upcoming elections. Somalia's government depends on international support for almost everything, including the salaries of soldiers and lawmakers. Around 9,000 African Union troops are stationed in Mogadishu to prevent the government from being overrun by militants. (AP Photo/Farah Abdi Warsameh) (AP)
--

The al-Qaida operative behind the 1998 U.S. Embassy bombings in Kenya and Tanzania has been killed, a Somali official said Saturday.

Somali officials have determined that a man killed by security forces on Tuesday was Fazul Abdullah Mohammed, said a spokesman for Somalia's minister of information, Abdifatah Abdinur.

"We've compared the pictures of the body to his old pictures," he said. "They are the same. It is confirmed. He is the man and he is dead. The man who died is Fazul Abdullah."

Abdinur said the government is planning to issue a statement confirming Mohamed's death.

Mohamed had a $5 million bounty on his head for allegedly planning the Aug. 7, 1998 embassy bombings. The blasts killed 224 people in Nairobi, Kenya and Dar es Salaam, Tanzania combined. Most of the dead were Kenyans. Twelve Americans also died.

Members of Somalia's most dangerous militant group, al-Shabab, have pledged allegiance to al-Qaida. Al-Shabab's members include veterans of the Iraq and Pakistan conflicts.

Hundreds of foreign fighters are swelling the ranks of al-Shabab militants who are trying in vain to topple the country's weak U.N.-backed government.

Somalia has been mired in violence since 1991, when the last central government collapsed.