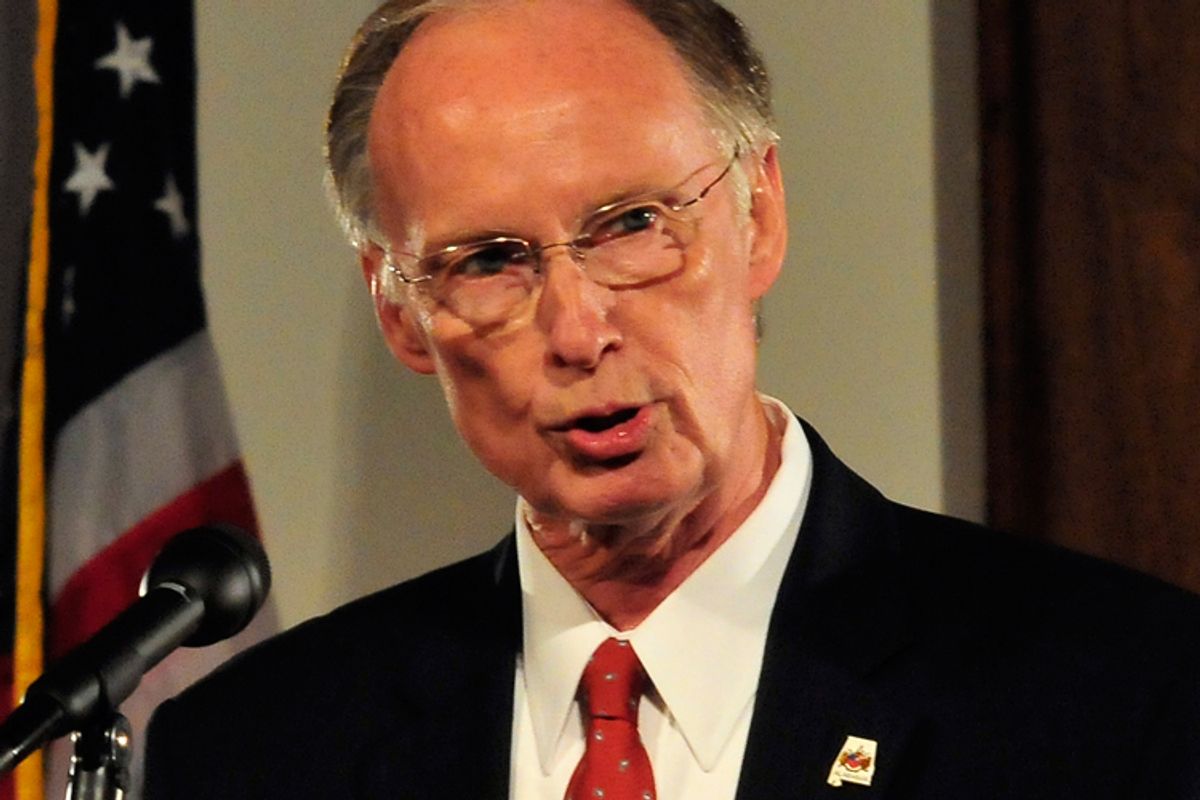 On Thursday, Alabama Gov. Robert Bentley signed what both critics and backers agree is the toughest immigration law in the country.

Despite the relative lack of national media attention, the Alabama law includes more harsh measures than even Arizona's notorious SB 1070, which immediately faced legal challenges after passing last year. Like the Arizona law, Alabama's measure requires local police to check the immigration status of people who they believe may be in the country illegally.

But it goes much further, establishing new requirements for checking the immigration status of students and potential tenants. It is scheduled to go into effect in September -- but not before a promised legal challenge by civil rights groups.

Bentley (whom we last encountered apologizing for comments about Jesus) signed the legislation after it passed both houses of the state's Republican-controlled Legislature by a wide margin.

To learn more about the measure and the planned lawsuit against it, I spoke to Sam Brooke, staff attorney at the Southern Poverty Law Center's Immigrant Justice Project.

What are the harshest provisions in this new law?

I think one of the sponsors of the bill summed up it best when he said: "This is the Arizona law with an Alabama twist." It is everything that was included in Arizona's SB 1070 -- including everything that was enjoined by the courts when they evaluated that bill. The twist is a provision in the Alabama law that requires schools to determine and verify immigration status of any student who is enrolling and any parent of students who are enrolling. The bill's backers are saying that this is constitutional because they are not turning people away from schools. The schools are not supposed to turn people away, but they are required to collect this data and to report it to the Legislature. This is clearly in violation of existing Supreme Court precedent, because it will in fact have a chilling effect on immigrant children enrolling in school.

There's also a prohibition on renting in the law. It is a crime for a landlord to rent an apartment if they knew or should have known that the tenant is undocumented. Also under the law, if a person enters into a contract with someone who they know to be an undocumented immigrant, that contract is unenforceable in the state courts.

Is it possible to know at this point what that rental provision will mean on the ground?

There are two states that have previously tried something similar, where you would have to get an occupancy permit from the city before you could rent, and the city was in charge of immigration verification before issuing a permit. The Alabama version is a little different. It says that the landlord is committing a crime and can be prosecuted if they rent to someone who they know or should know is an undocumented immigrant. We are very fearful that landlords will start to discriminate, because if there's any question about a person, the landlord will want to err on the side of not going to jail.

The Arizona bill had what's known as the "stop and verify" or "show me your papers" provision. That was enjoined by a district court and the Ninth Circuit. The state of Arizona has asked the Supreme Court to look at it, and that request is pending. Alabama's police provision closely mimics that of Arizona. The requirement in the bill here is that if an officer encounters an individual in any context, and they establish so-called reasonable suspicion that the person is without proper immigration status, the officer is to hold the person while they verify the person's immigration status. And then the officer hypothetically turns the person over to immigration authorities.

One problem with this is that police officers generally don't have any training on immigration law. This is not something they work on or are experienced with. The law on the one hand prohibits racial profiling, but on the other hand, race is clearly one of the main factors the police will use in making these determinations. Another issue is that the law creates huge civil penalties for any law enforcement agency that doesn't enforce this law. Any private citizen can now sue the police and the sheriff if they were not fully enforcing this law. So police are really being caught in a Catch-22. On the one hand they have to fully enforce this law they don't have any training for; on the other hand they still have to make sure they're not engaging in racial profiling. Because if they are, they are violating the constitutional rights of the suspect.

In Alabama your group, along with the ACLU and the National Immigration Law Center, is planning on filing a suit against the new law. What's the thrust of the case?

That's one of the main legal arguments. A host of civil rights claims have been included in these cases as well, including claims like profiling and unlawful arrest. We are still evaluating which specific claims will be presented in Alabama.

What has been the reaction among immigrants in the state to the new law?

People who are working on a regular basis with the migrant community here are getting calls all the time. I think there's a lot of fear right now. Everyone is concerned that it's going to affect everyone. Your immigration status won't even actually matter -- what will matter is if you have the right documents to show and how tolerant you are of the fact that you're going to have more questions asked of you because of the color of your skin. Many police officers are also nervous. They recognize that you have to be engaged with the population and let them know you're there to help. That way, when crime happens, people know they can trust you and go to you to report the crime. That keeps all of us safer. If people are afraid to call police, crime can run rampant. This is already a problem in certain immigrant communities.

Fundamentally it's our view that this is an un-American law. It's a law that requires people to carry identification on them at all times in order to prove that they're a U.S. citizen. It's a law that is making all of us a lot less safe here in Alabama. This is definitely a dark day in the civil rights history of Alabama.