How the hot dog became the most American food

Served everywhere from Coney Island to the FDR White House, the wiener has come to symbolize our way of life 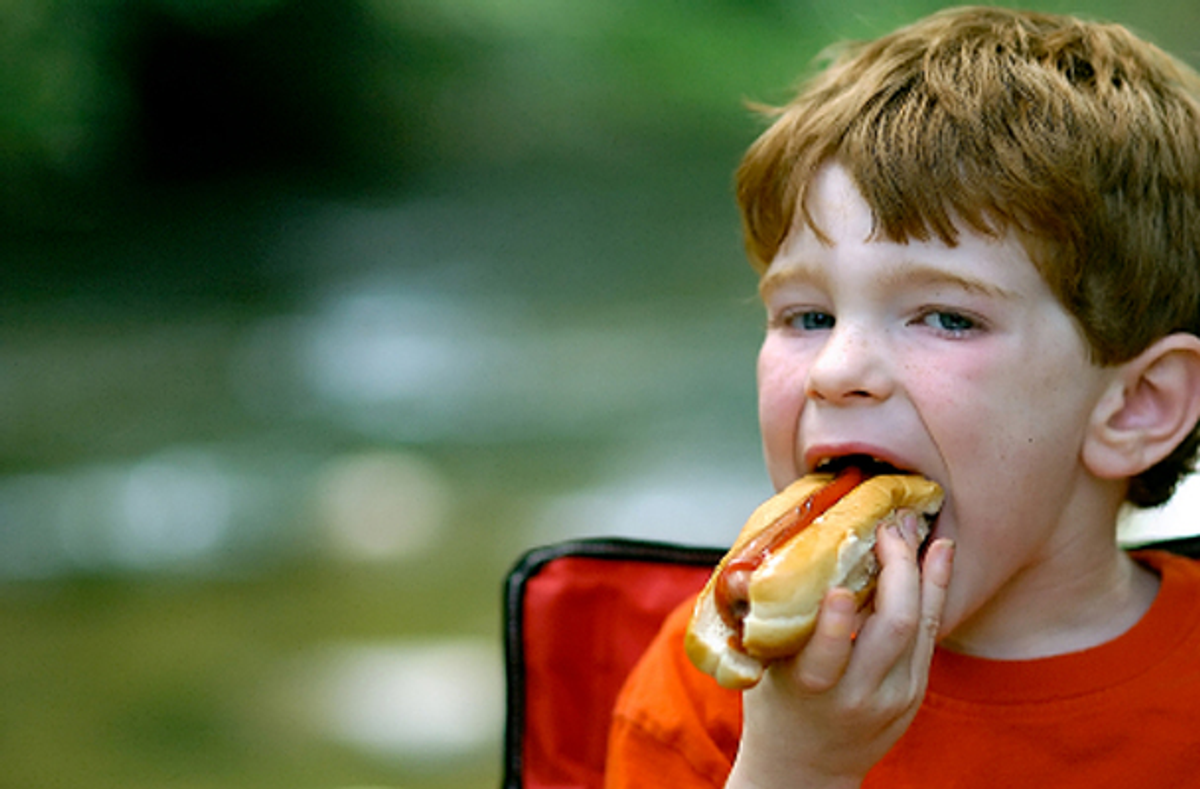 As the Coney Island boardwalk gives way to textured cement, and traditional Coney Island haunts such as Ruby's and the Cha Cha celebrate their last summer in the shadow of forced demolition, it seems an opportune time to take a look at the history of Coney Island's most iconic emblem: the hot dog.

Although Coney Island is at the epicenter of hot dog history, the dog did not originate on the boardwalk. The lowbrow snack is the bastard American descendant of sausages brought to the New World by immigrants from Germany and Austria (hence the origin of a word that has been getting a lot of press lately: "wiener," which stems from the name of Austria's capital, Vienna, or Wien). Sausage vending was a relatively inexpensive home business for upwardly mobile immigrants, and by the 1860s, the strolling meat purveyors were a fixture of urban street scenes. On September 1894, the Duluth News Tribune described a visit to Chicago:

More numerous than the lunch wagon is the strolling salesman of "red hots." This individual clothed in ragged trousers, a white coat and cook's cap, and unlimited cheek, obstructs the night prowler at every corner. He carries a tank in which are swimming and sizzling hundreds of Frankforters or Wieners. These mysterious denizens of the steaming deep are sold for five cents, which modest charge includes an allowance of horseradish or some other tear-producing substance.

Early frankfurters were prepared in small butcher shops or kitchens and probably featured a coarser grind of meat than does the average modern hot dog, which is the product of emulsifying technology. But it's hard to pinpoint "average." Even today, the definition of "hot dog" is vague: Hot dogs can be made of beef or pork or both, with or without casings. According to the Oxford Companion to American Food and Drink: "Most hot dogs are made from emulsified or finely chopped skeletal meats, but some contain organs and other 'variety' meats."

The origin of the term "hot dog" is so contentious that there is a 300-page scholarly book on the subject. The author, David Cohen, has been researching the term since 1978. His co-author, the incomparable word sleuth Barry Popik (who is famous in etymology circles for his contributions to the academic study of the word "dude") uncovered the proletarian dog's curiously blue-blooded roots: "Hot dog" was popular slang on the Yale campus in the 1890s; the "dog" was a humorous reference to the dubious origins of sausage meat. As Cohen says, "College students since time immemorial have combined a keen sense of wit with occasional bad taste. Both came into play in referring to a hot sausage as 'hot dog.' The term at first was disgusting, but of course it gradually caught on."

To complicate matters further: Since the publication of Cohen's "Origin of the Term 'Hot Dog,'" an earlier printed reference to hot dogs has emerged: an 1892 article in New Jersey's Paterson Daily Press:

The "hot dog" was quickly inserted in a gash in a roll, a dash of mustard also splashed on to the "dog" with a piece of flat whittled stick, and the order was fulfilled.

Although Germans traditionally serve bread with sausages, our modern hot dog bun may in fact be a product of Coney Island. A 1904 obituary for Ignatz Frischmann describes the Austrian baker as an innovator who experimented until he invented the perfect "Vienna roll" with which to supply Coney Island hot dog vendors. By the time of Frischmann's death, his rolls were indelibly associated with the hot dog. When dealing with such a controversial issue, it's best to get a second opinion. We asked hot dog historian Bruce Kraig (the author of "Hot Dog: A Global History") to confirm the theory, and he said, "I don't see why the Frischmann story can't be true. His creation was emulated by many afterward." In academic terms, that's practically a ringing endorsement.

While it's amusing to imagine academic types devoting a lifetime to the study of "hot dog" etymology, perhaps it's no more ridiculous than anything else. Historians have written treatises on the provenance of Bach's Sonata number 3. Who's to say the humble hot dog should not receive equal attention? The story of the hot dog is the story of the industrious immigrant, the genius of marketing, the creative cook, the boy at the ballpark, the illustrious academic. American nostalgia for the hot dog is almost unequaled: In the popular imagination the hot dog is synonymous with summertime, baseball, camping and, of course, the working man's Riviera.

A Mecca of glittering Americana, Coney Island had it all: racetracks, roller coasters, and legendary amusement parks: Steeplechase Park, Luna Park, and Dreamland, which was ablaze with 1 million electric lights. (On a 1907 visit, Maxim Gorky described Coney Island as a "fantastic city all of fire.") Three rambling luxury hotels catered to the elite, while the Elephant Hotel, which was shaped like an actual elephant (with a cigar store in one leg) had a reputation for prostitution. Prostitutes, dance hall girls, hucksters, gamblers and drunks provided entertainment in other nefarious blocks such as "The Gut," a shantytown in West Brighton, and the Ocean View Walk, a fetid alley nicknamed "The Bowery" because it resembled the dangerous and degenerate Manhattan neighborhood of the same name. While the rich dined on clams at seafood palaces such as Villepigue's, the poor picnicked on sausages from one of the beach resort's many stands.

Charles Feltman is credited with opening Coney Island's first hot dog restaurant, but Kraig debunks the story as a myth, pointing out that Feltman's restaurant was a seafood joint.

"By the 1880s there were many sausage sellers at Coney Island, but Feltman was not one of them. As a good German, he did serve sausages, but in fact he disliked hot dog vendors," Kraig says, adding, "In 1886 he is reported to have railed against sausage stands. Likely the Feltman story came from his association with the great hot dog entrepreneur and publicity genius, Nathan Handwerker."

Handwerker emigrated from Poland and got a job at Feltman's restaurant in 1916. After working there for a year, Handwerker saved enough money to open his own hot dog stand. The hot dogs were produced according to his wife, Ida's, recipe, and Handwerker cooked the dogs on a 12-foot grill. When the subway increased traffic to Coney Island in the 1920s, he was poised to capitalize on the low-budget hordes. Four years after coming to America, Handwerker had founded an empire -- between 1930 and 1950, Nathan's sold up to 50,000 dogs a day. Nathan's dogs are now sold internationally under the slogan "America's Favorite Hot Dog," though I prefer an older Nathan's slogan: "From a Hot Dog to a National Habit."

Like many of our other national habits, the hot dog is complicated. For example, the deep-fried "Texas hot weiner" is not from Texas -- it was invented in Paterson, N.J., by a Greek immigrant who drew on his own cultural roots to create a "Texas chili dog" with a chili reminiscent of Greek spaghetti sauce, savory with slow-cooked meat, cayenne, cinnamon, allspice, cloves and cumin. (A dog's historical origins are always disputed -- Pittsburgh, Pa., and Olean, N.Y., also have claims on the Texas hot weiner.)

Meanwhile, the "Coney" should not be confused with a hot dog from Coney Island -- Coneys (chili dogs as interpreted by Macedonian immigrants) are a beloved Midwestern tradition. And "New York System" is the name of a type of dog sold in Providence, R.I. The dog's esteem in the public eye is equally varied. Hot dogs were so indelibly lower class that the Coney Island chamber of commerce attempted to sever the association between hot dogs and Coney Island: In 1913, it passed a resolution forbidding the use of the word "hot dog" on signage. But by 1938, the dog was on the upswing: Eleanor Roosevelt insisted that hot dogs were on the menu when Crown Princess Louise of Sweden picnicked with the Roosevelts on Duchess Hill. Evidently encouraged by the Louise's reaction, the first lady served hot dogs again in 1939, when King George VI and Queen Elizabeth of England visited America. Though the queen ate her hot dog with a knife and fork, the meal was a success. To the embarrassment of some of the royal couple's stuffier cohorts, the king returned for a second helping. The New York Times reported:

It was with some obvious misgivings that Mr. McDermott first conceded ... that the King had eaten hot dogs at the picnic. He said that it was safe to assume that the King had done so since he had announced that he had been looking forward to the chance of sampling the favorite American snack. Later it was ascertained that the King not only came back for more hot-dog sandwiches but that he drank beer with them.

There's a hot dog to reflect every facet of America's cultural landscape. In Anchorage, Alaska, reindeer dogs reign supreme. Southerners tout slaw dogs. In Texas you can order a deep-friend coyote tail, or a hot dog wrapped in a flour tortilla and deep fried. The Tijuana dog (wrapped in bacon and piled with traditional taco toppings and conventional dog condiments) has been slowly migrating across the country since the 1950s. An East Coast variation called the Jersey breakfast dog is served with eggs. The Sonora dog, popular in Arizona, is served on a delicious bolillo (a baguette-like roll that probably stems from the French invasion of Mexico in 1861). During the "exotic" food fads of the 1960s, Chinese hot dogs (dogs wrapped like Chinese dumplings) appeared at dinner parties.  Kraig believes that the famous Chicago dog (a steamed poppy seed bun cradling an all-beef dog, topped with tomatoes, minced raw onion, peppers, pickle spear, tomato slices, celery salt and neon relish) is the result of immigrant hot dog vendors in the 1920s who sought to one-up each other by offering insane quantities of toppings. Meanwhile, in Philadelphia, you'll find the Philly combo, a kosher-inspired classic that involves an all-beef hot dog and a potato-and-fish cake.