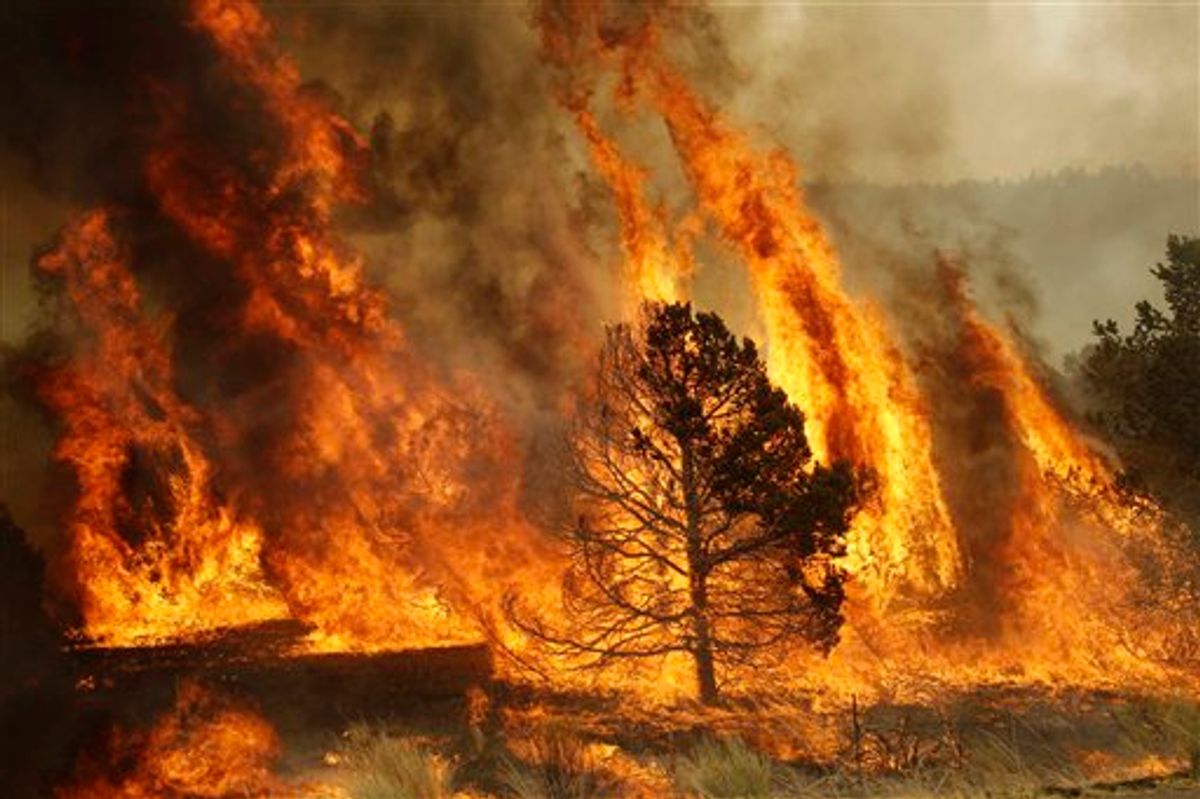 A forest burns during a backburn operation to fight the Wallow Fire in Nutrioso, Ariz., Friday, June 10, 2011. A massive wildfire in eastern Arizona that has claimed more than 30 homes and forced nearly than 10,000 people to evacuate is likely to spread into New Mexico soon, threatening more towns and possibly endangering two major power lines that bring electricity from Arizona to West Texas.(AP Photo/Marcio Jose Sanchez) (AP)
--

Smoke from a massive wildfire in eastern Arizona that has claimed more than 30 homes and forced nearly 10,000 people to flee has officials worried about serious health impacts to residents and firefighters as tiny particles of soot in the air reached "astronomical" levels.

"It was off the charts," Mark Shaffer of the Arizona Department of Environmental Quality said Friday night.

Calmer winds helped firefighters gain some ground, but also concentrated the sooty air, keeping it stagnate and raising pollution to levels officials hadn't seen yet since the blaze began several weeks ago.

"We've got a serious potential health problem on our hands," Shaffer said. "When you get levels like this, it's off the map."

Officials planned to bring in additional air quality monitoring equipment over the weekend, but warned people to just stay away.

The fire has burned 639 square miles of forest, an increase of 114 square miles from a day earlier, officials said.

"It's getting very, very close to the New Mexico state line," Jim Whittington, spokesman for the teams battling the fire, said Friday night. "This is really rugged country. There is a lot of potential" for the fire to grow.

He said after a good day with calm winds, Saturday was expected to get dicey.

"The atmosphere will be unstable and very conducive to fire growth," Whittington said. "We're very concerned about the winds."

He said firefighters may eventually have to set ablaze 150,000 acres to burn off fuel in the forest in order to stamp out the flames.

"It's going to be really difficult," Whittington added.

Fire crews plan to try to strengthen what lines they've been able to establish and continue burning out forested areas in front of the main fire to try to stop its advance. It was officially just 6 percent contained Friday, but the actual numbers likely are higher, Whittington said.

The advances came on the fire's north side, near the working-class towns of Springerville and Eagar on the edge of the forest. Nearly 10,000 people have been evacuated from the two towns and from several mountain communities in the forest.

On Friday, fire officials gave reporters the first look at two of the mountain communities -- Alpine and Nutrioso -- in nearly two weeks, driving them through the deserted resort towns and surrounding areas.

Some stands of trees in the forest were untouched while others looked like blackened matchsticks sticking up through lingering smoke. Firefighters were working in the area, using drip torches to light fires and burn out undergrowth.

Deer and elk grazed in unscorched areas, while wild turkeys walked through tall grass along the road. Two miles south of Alpine, whole hillsides of ponderosa were decimated.

The two Arizona-Texas power lines were still in the fire's path, although Whittington said he was less concerned about them Friday. El Paso Electric has warned its 372,000 customers that they may see rolling blackouts if the lines are cut.

The fire is the second-largest in state history and could eclipse the 2002 Rodeo-Chediski fire in size, although only a fraction of the homes have burned.

The Chediski began as a signal fire and merged with the Rodeo, which was intentionally set by a firefighter who needed work. Together they burned 732 square miles (1,895 sq. kilometers) and destroyed 491 buildings.

The current Wallow Fire in the Apache-Sitgreaves National Forest has destroyed 31 homes or cabins, including 22 in the picturesque mountain community of Greer, Whittington said. Two dozen outbuildings and a truck also were lost and five homes damaged in Greer when the fire moved in Wednesday night.

Firefighters are battling another major wildfire in far southeastern Arizona, also near the New Mexico line. The so-called Horseshoe Two blaze burned through 211 square miles or 135,000 acres of brush and timber since it started in early May. The fire has destroyed 23 structures but caused no serious injuries. It was 45 percent contained late Friday and fire officials hope to have it fully contained by late June.