A guide to Spielberg shout-outs in "Super 8" 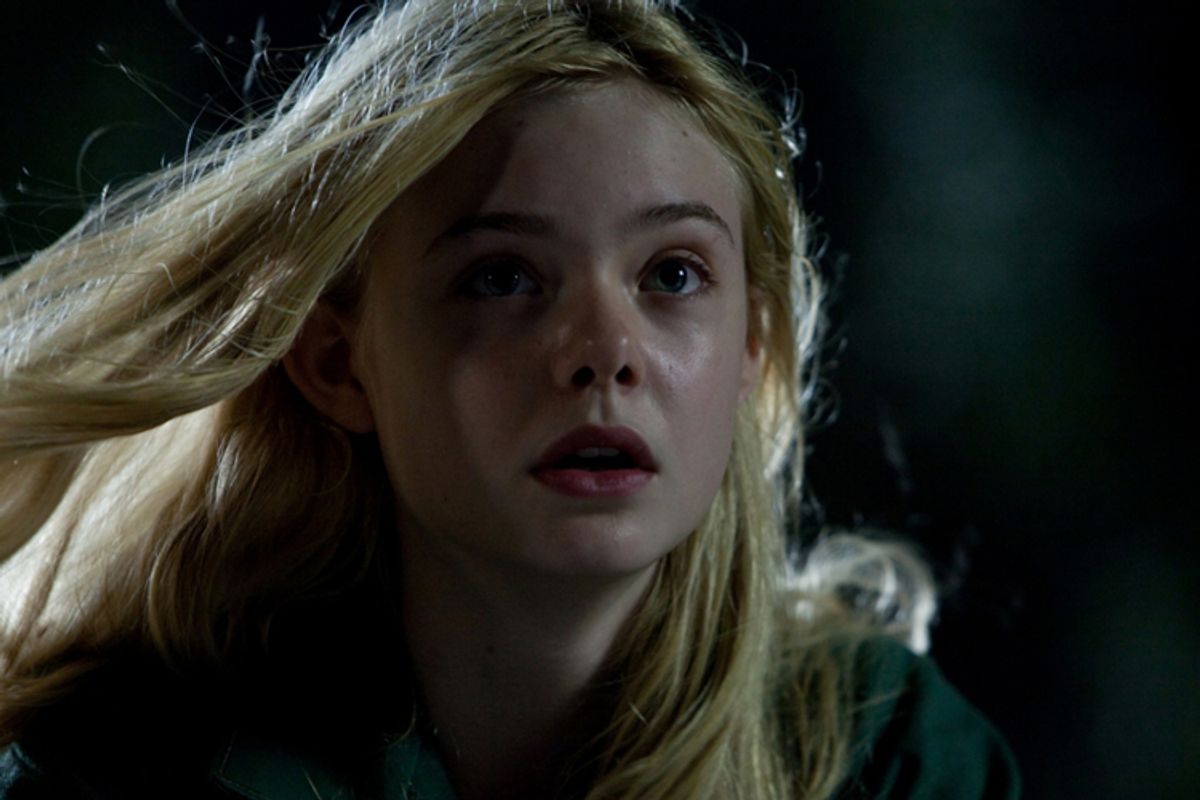 "Super 8" has been promoted as a film in the spirit of Steven Spielberg's early popcorn-centric movies, and it definitely has the pedigree. Beyond sporting Spielberg's name as executive producer, the film is directed by Spielberg obsessive J.J. Abrams ("Lost," the 2009 "Star Trek"). Abrams is one of many protégés mentored by Spielberg over the past few decades. A quarter-century ago, Spielberg saw Super 8mm films made by Abrams and his childhood friend Matt Reeves ("Cloverfield," "Let Me In") and hired them to cut together his own home movies.

No huge shock, then, that "Super 8" would feel like one-stop shopping for devotees of the filmmaker's early features -- the ones he made before moving into more historically focused or adult-themed work.

What follows is an alphabetized list of Spielberg titles, plot elements, and visual signatures that Abrams invokes in "Super 8." There are so many that we have surely missed a few; feel free to add others in the Letters section.

MAJOR SPOILER WARNING. This article discusses "Super 8" in detail. If you haven't seen it yet and don't want to know anything about the plot, stop reading now.

"Close Encounters of the Third Kind" (1977) The short list of "CE3K" shout-outs includes the mysterious disappearance of the small town's canine population plus many humans (an oblique homage to the human abductions in "E.T."); the military's cover-up of their attempts to capture the escaped beast, which includes a manufactured forest fire  (rather like the phony nerve gas spill at Devil's Tower); a fleet of mysterious trucks rumbling across the landscape; and constant electrical disturbances in town, caused by the creature's apparently psychic energy.

Daddy issues. From "E.T." through "The Last Crusade" up through "Catch Me if You Can" and "Indiana Jones and the Kingdom of the Crystal Skull," most Spielberg movies have them -- and "Super 8" has them, too. Both the hero and the heroine are estranged from their troubled dads and enjoy tearful reconciliations at the end of the story.

"E.T.: The Extraterrestrial" (1982) Spielberg's early '80s smash is probably the single biggest influence on Abrams' new film, thanks to its extraterrestrial-in-the-suburbs plotline, its warm but claustrophobic depiction of middle class family life, and its emphasis on a young boy's depression over recent trauma. (Elliott in "E.T" is a child of divorce, while the hero of "Super 8"  lost his mom in a steel mill accident.)

But there are other, more specific references. Like Spielberg in "E.T." -- and pretty much any fantasy or horror director with a smidge of common sense -- Abrams keeps the "Super 8" creature shrouded in shadow or strategically hidden by foliage or bits of architecture, then gradually reveals it. But his direction also leads viewers to believe that the creature is brutish and menacing, or at least creepy, even though it is later revealed as highly intelligent and essentially benevolent. (E.T. is nonviolent to his core, but the tormented alien in "Super 8" has been abused by government scientists since the '60s, is way pissed about it, and has a right to be.)

The creature's meticulous construction of a makeshift starship evokes E.T.'s attempts to build a radio with which to call his fellow extraterrestrials and set up a rescue. A wide shot of the town as seen from a wooded ridge is an obvious reference to the famous shots of Elliott's suburb as seen from the forested hills. And the film's finale is unabashedly modeled on the end of "E.T.," with all the major characters coming together near the water tower at the center of the town. The tower is systematically transformed into some sort of nano-technological spacecraft made of secondhand parts. When the ship lifts off, the water tower explodes, drenching the town; it's Abrams' version of the farewell rainbow that E.T.'s starship leaves in its wake as it heads home.

The creature's bond with the renegade scientist, Dr. Woodward (Glynn Turman), combines elements of Eliott's psychic bond with E.T. and the sensitivity and kindness of Peter Coyote's "Keys" character in the 1982 film, who initially seems menacing but is ultimately revealed as an ally of E.T. and his human pals -- kind of a hippie-esque fifth columnist operating within the military-industrial complex.

Flashlights or searchlights as harbingers of impending doom. Spielberg has often used the sight of a flashlights or searchlights to induce goosebumps in the audience, which fears whatever forces are behind that beam. Flashlights made their most memorable appearance in "E.T." (see above). But Spielberg has also deployed bright, probing shafts of light inventively in "Close Encounters (Barry's abduction), "Schindler's List" (the Krakow purge sequence) and "War of the Worlds" (throughout) and many other features.

"The Goonies." (1985) Richard Donner's 1985 modern pirate movie (executive produced by Spielberg) gives "Super 8" much of its raucous juvenile energy. Abrams' amateur filmmakers are a band of young adventurers on a risky secret mission. When they finally enter the creature's underground lair-cum-workshop, the set is lit and decorated to evoke the pirates' headquarters in "Goonies," as well as the Temple of Doom in the second Indiana Jones film and the Lost Boys' hideout in Spielberg's 1991 Peter Pan bomb "Hook."

God's eye point-of-view shots. "Super 8" has several moments where the film jumps away from a flurry of action at ground level and shows us a static, high-angle view, with the camera so far up that the image must have been created with miniatures, digital animation or other effects, because no helicopter could hold a shot that still. Spielberg first perfected this type of shot in "Close Encounters" (think of the shadow of the spaceship passing over Richard Dreyfuss' truck as it drives away from the railroad crossing). But he has used it sparingly but strikingly ever since; one of my favorite examples is the high-angled shot in "The Lost World" that shows the converging patterns caused by terrified humans and pursuing raptors trampling the long grass.

"Gremlins." (1984) In "Super 8," character of Dr. Woodward (see the "E.T." entry, above) is played by Glynn Turman, who played Mr. Hanson, the doomed biology teacher from "Gremlins." The film was directed by Joe Dante but executive produced by Spielberg.

"Jaws." (1975) (See "E.T." above.) Abrams' gradual revealing of the creature in "Super 8" follows a pattern perfected by Spielberg in the original 1975 "Jaws" -- letting a part or parts of the creature stand in for the whole. In "Jaws," the shark is initially identified by its fin, the only part visible to humans on the surface. The beast in "Super 8" is initially treated as an indistinct mass of writhing tentacles or spider legs, then is gradually revealed more fully.

The kids' mission to rescue a kidnapped member of their amateur film crew -- Elle Fanning's Alice -- has echoes of the Orca's shark hunting expedition, and a couple of the monster attacks are staged in a way that recalls early shark attacks in "Jaws," especially the opening killing of the female swimmer and the moment where the two ignorant fisherman on the dock are terrorized by the great white.

"Jurassic Park" (1993) and "Jurassic Park: The Lost World" (1997). The action scenes in "Super 8" are heavily indebted to Spielberg's first two "Jurassic Park" films, particularly the moments where a menaced person will sort of "disappear" when another character isn't looking, and the many shots of the creature as seen from a distance, its thunderous motions indicated by the shimmering of treetops and shrubbery and by the violent hurling of wrecked pieces of buildings and machinery.  The alien's climactic attack on a military bus carrying the arrested kids is modeled on the Tyrannosaur attacks in Spielberg's "Jurassic" movies; there's even a high-angled tracking shot across the length of the overturned bus that pointedly references the tag-team T-Rex attack in "The Lost World."

Lens flares. These streaks produced by pointing a camera's lens straight at a light source were once considered signs that the cinematographer was an amateur; but in the 1960s and '70s they became artistic flourishes, thanks to such seminal Hollywood films as "Cool Hand Luke." Spielberg has always dug lens flares, and his early films sported a lot of them. The flares had a distinctively narrow, tapered shape because Spielberg used to film his features with Panavision lenses in anamorphic widescreen, a format that compresses the image during shooting and then unsqueezes it in projection to produce a very wide rectangular frame. Like Abrams' 2009 film "Star Trek," "Super 8" is shot in anamorphic widescreen format, and is unabashedly in love with lens flares and showcases them every chance it gets. Abrams has said in interviews that he adores lens flares and favors lenses that are more likely to produce them.

Storybook skies. The matte-painted or composited nighttime skies in Spielberg's films have an almost storybook clarity that make them look more illustrated than photographed: vast expanses of deep blue or black, dotted with impossibly bright pinpoint-pricks of starlight. There are many such images in "Super 8," and their design is so Spielbergian that it's a wonder that Abrams was able to restrain the urge to add one of Spielberg's early visual signatures, a shooting star.

Upside-down shots. The disorienting shot from inside the military bus as it's toppled by the creature may remind viewers of similar trick shots in Spielberg films, particular "Ce3K" and the "Jurassic Park" films, as well as the amazing end of the gas station sequence in "Let Me In," directed by Abrams' childhood friend and fellow Spielberg obsessive Matt Reeves.