Are the world's women disappearing?

The balance between males and females is becoming increasingly skewed. An expert explains why we should be worried 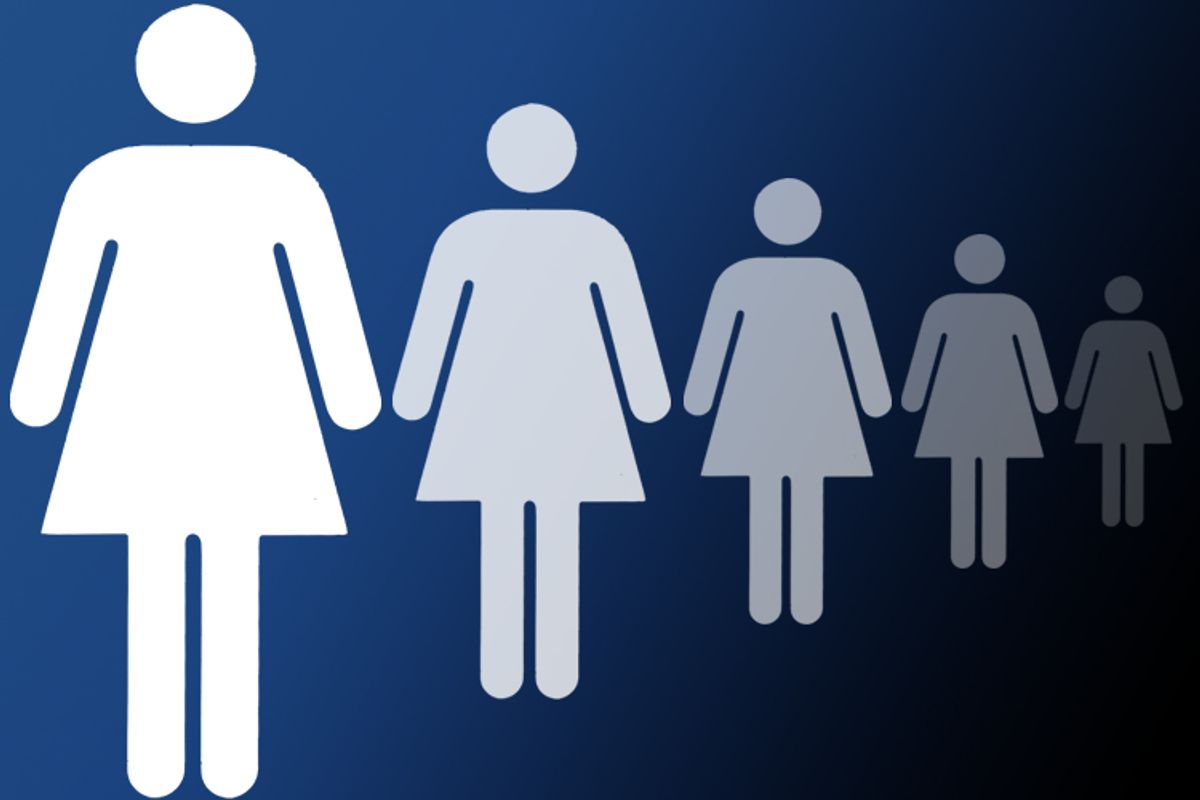 What would our world be like if it contained far fewer women? It may seem like the stuff of post-apocalyptic fiction, but according to journalist Mara Hvistendahl, the author of "Unnatural Selection: Choosing Boys Over Girls, and the Consequences of a World Full of Men," truth is coming closer to fiction. According to Hvistendahl, a science writer and correspondent for Science magazine, the world is currently experiencing a demographic shift that is tilting our population in favor of men.

The main source of her concern is the fact that a growing number of parents in various parts of the world have been using ultrasound technology to determine the sex of their fetus and, in a disturbing number of cases, terminating females. Based on personal anecdotes and research from fields as disparate as demography, sociology, economics and genetics, Hvistendahl speculates about what this means for everything from bride buying and sex trafficking to male violence, and why it might be causing global unrest.

Salon spoke with Hvistendahl about our overpopulation fears, what this trend means for abortion and America's own curious sex selection trend.

The international sex ratio is nearly equal, with 101 males for 100 females. So why is the sex imbalance at birth in some countries, like China and India, a problem?

The sex ratio imbalance in Asia is such that it has skewed the sex ratio at birth of the whole world. We are talking about 160 million women and girls who are missing from the population. This is reshaping whole societies. There are many men who are growing up and can't find wives, so they're going to poorer countries to buy them. Sex trafficking is on the rise as well. Prostitution and crime have increased, and these are all huge problems.

You point out in the book that American concern about overpopulation in the developing world has played a significant role in sex selection. Why is that?

The population control movement in America in the 1960s was an issue almost like climate change today. It was something people really cared about and racked their brains for possible solutions to the problem. There were U.N. estimates for the first time that showed the population veering out of control, and organizations like the Rockefeller Foundation, Planned Parenthood, Ford Foundation and the World Bank were all working with scientists and sociologists to do studies in the developing world to look at what some of the barriers to reducing the birth rate were. One of the things that came up was that women in many parts of the world wanted at least one son, and they were having kids until they had one. The idea emerged to guarantee them a son on the first or second try.

Research into sex selection was happening for other reasons at the time and people like Paul Ehrlich, the author of "The Population Bomb," proposed sex selection as a solution in their work. This was against a backdrop of all these other coercive solutions being tried. It was a time when women were being sterilized against their will or forced to abort. People were considering birth targets, which is what became the one-child policy in China. Compared to those strategies, sex selection looked weirdly ethical to the white men who led the population control movement. If women and people of color had a larger role in shaping those discussions, maybe sex selection wouldn't have become such a favored solution.

You end the book by mentioning that some people in the U.S. are using preimplantation genetic diagnosis, an embryo screening tool used to choose the sex of the fetus, and, in a curious reversal of the male bias in your book, they often choose girls. Do you see this technology as a problem?

There aren't great figures on what Americans prefer because it's just what directors of fertility clinics tell us. If there is a preference for girls, fundamentally it is not that different from what's happening in Asia. Sex is the first condition we can select for that is not a disability or disease, and this could be the beginning of a slippery slope. The U.S. is really the Wild West of assisted reproductive technologies. We have very few regulations and even the guidelines of the American Society for Reproductive Medicine are voluntary, so clinics don't have to follow them. American technology has a great impact on the rest of the world, and sometimes it is promoted or used for sinister gains that have a great impact in the developing world. This is really the takeaway of my book.

Has researching the book changed your views on abortion?

My own stance on abortion didn't change, in that I continue to be pro-abortion rights. I was, however, dismayed at how much American abortion politics on both the right and the left has come to bear on the issue of sex selection in ways that are reshaping the developing world. On the right, conservatives have made this an issue about the fetus and when life begins. They are using what happens in Asia to try to push through restrictions on abortion in the U.S. But I don't see much concern for what's happening to men and women in the developing word. On the left, people are generally pretty scared to tackle this issue because it deals with abortion, and the result is that we don't see much international action.

Then why aren't more pro-choice feminists more vocal about this?

Sadly, the only organizations doing much on this issue are antiabortion organizations, and their campaigns are not about helping the women. They are about pushing through restrictions on abortion. That said, it is important to remember that the context surrounding abortion in Asia is completely different than the context in the U.S. This is not to say Asians haven't had the same debate over when life begins, but for the past 30 to 40 years there have not been the same barriers as American women face. Abortion clinics are advertised on prime-time television in China.

You point out that educated, middle- and upper-class, urban dwellers are more likely to select for sex. Was this surprising to you?

Gender imbalance is often portrayed in the media as something poor women in rural areas do. It's often conflated with infanticide, which is only a small part of the problem. If you look at the numbers, educated women in India are much more likely to scan for sex and abort a female fetus. Literate women are more likely to do it than illiterate women. In China, it's the booming areas in the East where people are making more money where this is happening. That's alarming because it means the problem could trickle down, and it means we have to think about the issue and its solutions in a different way.

Does anyone benefit from sex selection?

The state-controlled, top-down eugenics and population control model of the ‘60s has given way to an almost consumer eugenics where individual parents make decisions that may make sense for their family, but when you add up those decisions, you get a huge societal problem. At the time a couple decides to scan for the sex of the fetus and abort, you can say that they're benefiting in that moment, but down the road there are all these issues. The son may not be able to find a wife. It's kind of like environmental protection in the U.S. We talk a lot about it, but families still want an SUV, even though that will negatively impact them down the road.

People like Indian economist Amartya Sen have said sexism plays a big part in the gender imbalance. But you disagree.

This is an issue of economic development. If you look at where people tell researchers they want sons, it's almost every country. This preference for sons is almost universal, but you don't see sex ratio imbalance everywhere. There are countries in the world where women have very low status, like the Middle East, yet the sex ratio at birth is balanced. So, gender inequality doesn't work as an explanation for me.

One of the reasons some people panic about sex selection is that they're worried India and China will develop into hyper-masculine states that will no longer be "kept in their place" by the West. Is this simply a new iteration of Western racism?

We have a history of looking at population issues in foreign cultures as a threat to America. The Yellow Peril and the notion of climate refugees overwhelming our shores are examples. Ultimately, the gender imbalance is causing unrest. It is an issue for the Chinese and Indian government, and it may very well spread to other countries. The reason we should care about what's happening is because it entails all these horrible human rights abuses. Women are being trafficked; they're being bought and sold. The U.S. played a role in creating the problem and we're developing new technologies that will make new forms of sex selection possible. Every layer of society is being affected and that's why we should take action.

Sex trafficking was already occurring in Asia, but the imbalance has made it worse. The U.S. State Department lists the imbalance as a major cause of trafficking in the region. Scholars have found a relationship between prostitution use, the number of prostitutes in China, and sex ratio at birth. Also, sex ratio didn't skew at the same time in China, so some provinces had spikes in the number of boys earlier than others, and economists have found the crime rates in those places have spiked as well. These societies are changing very rapidly, but historically a huge imbalance in the sexes has not been a great thing.

There are people in Asia who are working very hard on this issue and are passionate about what is happening. Gender imbalance doesn't get international attention and it's not an issue the U.N. deals with forcefully. Individual activists don't have a great amount of resources, and governments are preoccupied with other things. Some degree of international action is required in order to see changes.

Do you think the reticence is because it's harder to advocate for the unborn rather than the living?

I think the hesitance regarding this issue is its relationship with abortion. The U.N. Population Fund is hugely contentious in the U.S. Just getting funding has been a major issue here, and they're reluctant to take on an explosive issue. Since I wrote the book, there has been a joint agency stance on sex selection issued by the World Health Organization. It's not a huge break with the past and the major preoccupation is preserving abortion rights. While those are important, we also need to deal with gender imbalance. And I think we can do both.

I think there needs to be more resources for the women who end up in new countries not speaking the language or knowing who to turn to if they have legal issues or other concerns. Bride buying is so common in Taiwan that the government has issued a report, translated into multiple languages, explaining the woman's rights and what she can do in different circumstances. I think there should be more programs like that in other countries.