How Internet sleuths convinced a married American man to admit he was the fabled, and allegedly kidnapped, blogger 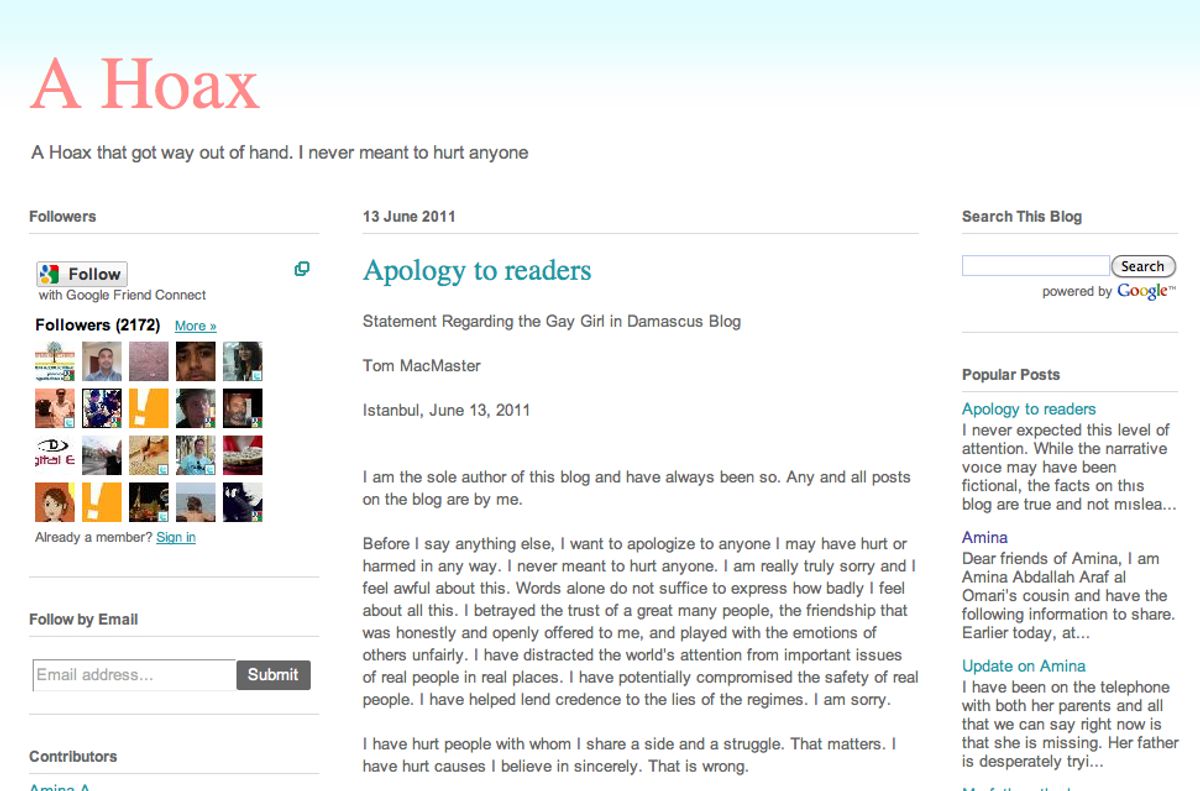 Less than a week ago, we reported -- as did countless other news organizations -- that a popular lesbian blogger from Syria, called Amina Abdallah Arraf, allegedly had been abducted on the streets of Damascus. Only a day later, we qualified that news, summing up rising doubts about the blogger's identity that had been expressed online. Who was Amina Abdallah Arraf? Could anyone prove that she actually existed?

In the days since, we've paid close attention as NPR's Andy Carvin, the Washington Post's Melissa Bell and Elizabeth Flock, the Electronic Frontier Foundation's Jillian York, and many other online sleuths have chased this story to its bitter end. Sunday the real author of the "Gay Girl in Damascus" blog, Tom MacMaster -- a middle-aged American living safely in Edinburgh -- finally confessed that "Amina Arraf" was his creation (his wife, Britta Froelicher, also released a statement -- but a far less sensitive one). At the Washington Post, Bell and Flock wrote:

The persona Tom MacMaster built and cultivated for years -- a lesbian who was half Syrian and half American -- was a tantalizing Internet-era fiction, one that he used to bring attention to the human rights record of a country where media restrictions make traditional reporting almost impossible. ...

MacMaster had used Amina as an identity online for at least five years. He started the blog in February, shortly after Amina told people she moved back to Syria from the United States. Amina’s story might have remained believable, but when he wrote of her arrest, her fans -- in a desire to help the woman they had grown to care about -- found a trail of evidence that led back to MacMaster.

Andy Carvin, who has followed this story doggedly from the beginning, explained his initial doubts about Amina in a deck.ly post last week. At the time, he said he had been tipped off by Syrians who doubted some details of Amina's accounts; he had then proceeded to interview his Twitter followers, and when that yielded nothing, also individuals who had claimed to have had direct contact with Amina. Before very long, one thing was clear: No one could admit to having seen Amina in the flesh.

Other details didn't add up. For instance, images of "Amina" circulated to friends and even news outlets turned out to depict a London woman called Jelena Lecic, who publicly denied any knowledge of Amina or her project. Suspicions were also aroused by the facts that "Amina" used a computer with an Edinburgh IP address and MacMaster had used his wife's personal Picasa photographs of Syria on Amina's blog. (For full details of MacMaster's exposure, read Bell and Flock's comprehensive account here.)

The news of MacMaster's identity has unsurprisingly provoked outrage among many former "Amina" supporters -- not to mention journalists more widely. In the Guardian (one of the newspapers that originally brought "Amina" to the attention of Westerners), Brian Whitaker writes today:

Why on earth would a married man in Scotland pretend to be a lesbian living in Damascus? However MacMaster tries to justify it, he should have called a halt as soon as it started to get out of hand. Living a fantasy life on your own blog is one thing, but giving an interview to CNN while posing as a representative of the region's gay people appears arrogant and offensive, and surely a prime example of the "liberal Orientalism" that MacMaster claims to decry.

For his own part, MacMaster has explained his motivations in more detail to NPR. He says he decided to start a blog for "Amina" -- a character he had created years earlier -- this spring, when Paula Brooks, editor of LezGetReal, expressed interest in his work. He adds:

When I got a first couple initial media bites, I was extremely flattered and impressed with myself that here I had written something that was fictional but it was getting taken seriously as a real event. It appealed to my vanity that here I am, I'm so smart, I can do this.

Here's what happened next, according to NPR:

[Despite his early success, he] knew he had taken it far enough. MacMaster said he thought when he had moved the Amina character to Damascus in the fall of last year, he was going to walk away from it. But the Arab Spring called her back. He said she would have a lot of things to say about it. But keeping up with Amina was taking up one to two hours of each day and his story was unraveling.

So he decided he would have Amina kidnapped by Syrian authorities. ...

What MacMaster never expected was the outpouring of support for Gay Girl In Damascus. Facebook groups formed around her, calling for her freedom and even the State Department sought to get involved to try and help her out of the situation she was in.

"I was supremely stupid and miscalculating and I shouldn't have created that story" MacMaster said. "But I needed to shut things down and everything's been shut down."

Many are furious that MacMaster has distracted attention from the real crisis in Syria by creating such a powerful alter ego -- and standing by for a week while activists (and even the U.S. State Department) frantically tried to help "her." Beyond this, of course, there is an additional human aspect to consider: Though Amina was fake, many of her online friends -- even her Canadian "girlfriend," Sandra Bagaria -- seem to have had no idea, until now, that they were part of a years-long hoax. It's surely good news that Amina is not a real person suffering in a Syrian jail (although many people truly are in that terrible situation), but for these people, their worst fears have still been realized: Their friend has disappeared.