Republicans' economic idiocy will likely doom their presidential dreams. Unless voters feel Obama's not much better 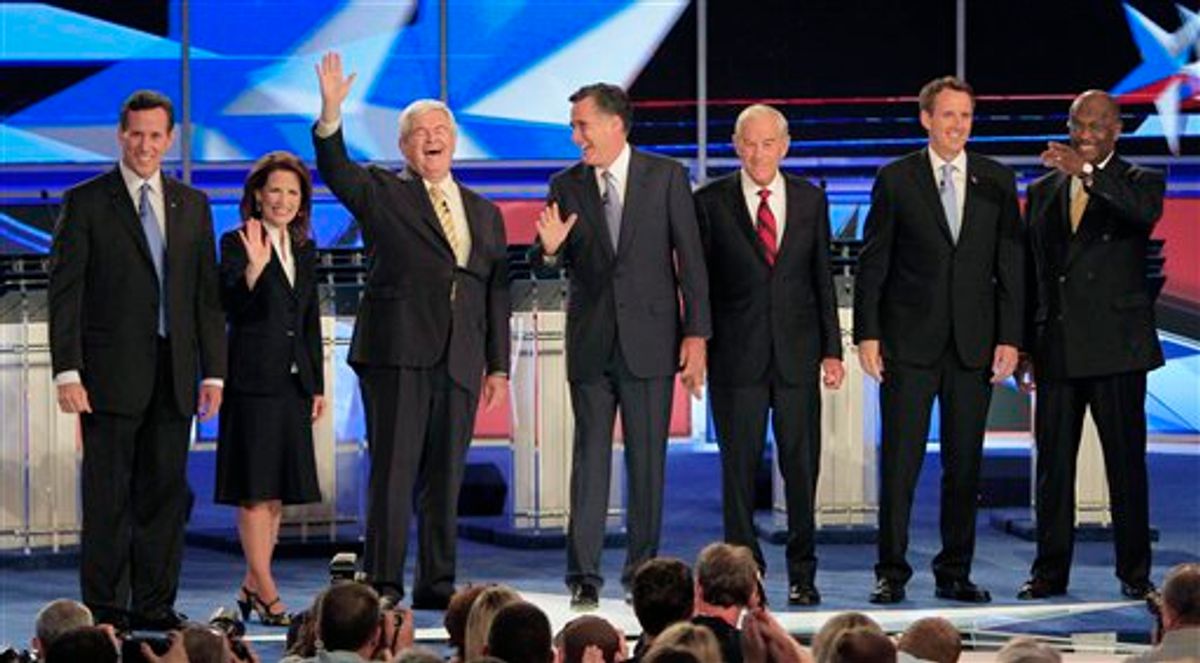 Nominal GOP front-runner Mitt Romney started the day with a direct hit on President Obama, a stark, disturbing ad attacking the president for responding to May's jump to a 9.1 percent unemployment rate by saying, "There are always going to be bumps on the way to prosperity." In the ad, Romney's team assembled a multiracial group of Americans that looked a lot like the Democratic base: blacks, Latinos, Asians, young people, recent college graduates and a brave-looking single mother, along with working- and middle-class white men, maybe some of them union members, another pillar of the base. All of them tell us they're not "bumps on the way to prosperity"; they carry placards with brief descriptions of the story behind their joblessness and tell Obama, "I am an American." As Andrew Leonard said this morning, Romney's description of our nation's economic problems was spot on, but there was no prescription to show he'd do a better job than Obama has in solving them.

That summed up Romney's performance at the first major GOP presidential primary debate Monday night, sponsored by CNN. Romney took the lead in describing the country's economic woes, pointing to the 20 million people who are unemployed, underemployed or who have stopped looking, and the millions of Americans still facing foreclosure. But in the debate he had to at least fumble at some prescriptions, and he failed.

He still stood head and shoulders above the other candidates. I'm going to give Tim Pawlenty credit for trying to grope toward some kind of honesty about the plight of the American worker; he flicked at concerns about the fairness of trade deals, concerns that some union leaders share. But when push came to shove, Pawlenty showed he misunderstands the problem, because he made labor unions the scapegoat. (Pawlenty also hurt himself badly when John King urged him to share his Sunday show trashing of Romney; he labeled the healthcare reform bill "ObamneyCare," since Obama has, in an act of well-deserved political sadism, lavished praise on Romney for the law, but he wouldn't repeat his criticism, man to man, with Romney in the room. The "wimp factor" headlines write themselves.)

But of course all the other GOP candidates trashed unions, especially Romney. Romney went so far as to claim Obama prioritized the pro-union Employee Free Choice Act (the so-called card check law) over other more pressing American issues. He should talk to AFL-CIO president Richard Trumka about that, since one of Trumka's frustrations is that Obama's not pushing EFCA. But that would require Romney to talk to actual labor leaders, which might make him untouchable by GOP primary voters. Romney also trashed the job-saving auto-industry bailout for being a payoff to the UAW, when in fact union leaders renegotiated contracts and accepted concessions many observers thought they never would. Ex-Pennsylvania Sen. Rick Santorum agreed: "We should not have had TARP, we should not have had the auto bailout," the going-nowhere Christian right candidate whined. In fact, Obama's auto intervention is one of the few big moves he's made to preserve jobs; it's predictable but sad to see all Republicans united in trashing him.

The debate was particularly depressing not because of the candidates' hate-mongering on issues like gay marriage, civil rights for Muslim Americans, and abortion. We expect that from Republicans now, and voters who care about those issues have a political alternative: most Democrats. It was Republicans' absolute illiteracy about the way the economy works that was frightening -- that, and the fact that people worried about the economy won't find an utterly reassuring set of policies or programs from Democrats, since Obama has decided to endorse Corporate America's "deficit cutting is crucial to getting the economy moving again" line. CNN's John King got a lot of criticism (deserved) for using time to ask the candidates what he called "this or that" questions: Silly queries designed to let us "get to know" them. They had to choose between Leno and Conan, Johnny Cash and Elvis; BlackBerry or iPhone, abortion or contraception (kidding!) and "Dancing With the Stars" or "American Idol." Actually, that last one -- to Newt Gingrich -- elicited something we hadn't seen before in the debate: A tiny attempt at a smile, which came across as more of a grimace, but was still a sign of life from Gingrich. I've already declared his candidacy dead; tonight was further proof, if we needed any. He didn't seem to care about anything; Mr. Futuristic even declared the declining U.S. space program essentially dead, in the face of soul-crushing, economy-destroying federal deficits. Oh, he also got excited about making federal government staff take loyalty oaths; but who could blame him, given that his entire campaign staff just quit en masse. No, Gingrich wasn't the story, he's toast.

But King deserves credit for asking a question I've already noted that too few mainstream reporters bother with. Challenging Pawlenty to defend his crackpot deficit reduction program, King got real: "Where’s the proof that just cutting taxes will create jobs? If that were true, why during the Bush years, after the big tax cut, where were the jobs?" Pawlenty ducked the question, because there's no answer: As I laid out in the earlier link, Bush's tax cuts torpedoed the economy. (Oh, and by the way? The '80s economy grew not when Ronald Reagan cut taxes, but after he raised them.) But when King pushed Pawlenty on the unrealistic scenario of 5 percent annual economic growth that he used to formulate his plan, the former Minnesota governor took the opportunity to further demonstrate his ignorance about the way our economy has worked:

In fact, China and Brazil have robust growth because, unlike the U.S., they're building a middle class, not taking it apart, the way we are. These supply-side economics groupies distort what's wrong with our economy: Thanks to unemployment and the foreclosure crisis, plus almost 40 years of no income growth for working- and middle-class families (and even income declines for some subgroups), Americans can't help the country consume its way out of the recession, or contribute to the recovery with tax revenues (for those who think the deficit is the biggest economic problem). The recession itself is making recovery much, much harder, and maybe impossible: Too many workers are draining public revenue, rather than producing it. The resulting lack of demand makes employers nervous about increasing hiring or even capital investment. Obama's inability to respond with a bigger stimulus bill and other measures to use the federal government to stimulate demand again will hurt the country, and may hurt him politically too. But it's possible it won't, because in 2012 he's almost certain to run against a right-wing kook or a formerly moderate dissembler in next year's election.

I said on MSNBC's "The Ed Show" (video below) that Romney and Bachmann were the debate's two winners, because as Steve Kornacki has argued, there are two debates in the GOP this year, one for the formerly sensible and centrist who are still trying to appeal to mainstream Republicans and independents, and another to be head of the Tea Party. Romney won the first, Bachmann the second. I misspoke on "Ed," though, when I said Romney might have hurt himself in Michigan by blasting Obama's auto "bailout." He could only be hurt by it if someone wanted to argue that Obama did the right, job-preserving thing, and that would never happen in a GOP primary. But if Romney's the GOP nominee, which is possible, Obama got himself a great general election commercial tonight.