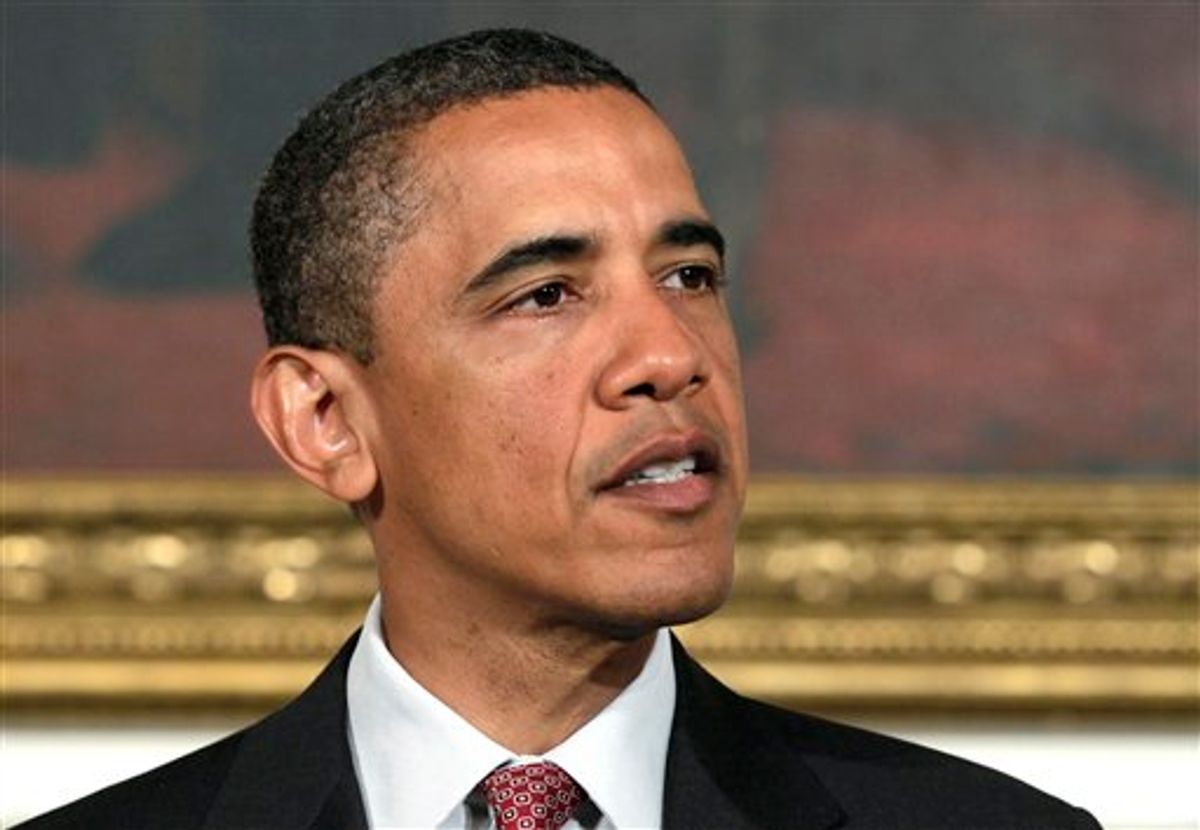 FILE - In this May 31, 2011 file photo, President Barack Obama speaks in the State Dining Room of the White House in Washington. Republicans and Democrats scolded President Barack Obama on Friday for dispatching U.S. forces against Libya without getting congressional approval as the House moved toward approval of a resolution demanding a rationale for the mission. (AP Photo/Carolyn Kaster, File) (AP)
--

The first article, by Charlie Savage, details numerous new powers the FBI has granted to its agents to spy on and surveill American citizens in the absence of any evidence of wrongdoing: "to search databases, go through household trash or use surveillance teams to scrutinize the lives of people who have attracted their attention." That policy expands upon a Bush era decision to allow FBI agents to conduct national security investigations aimed at citizens even in the absence of suspicion of wrongdoing and by using racial and religious considerations in determining targets.  As Savage details with his typical thoroughness, the new Obama policy expands the surveillance activities the FBI is authorized to exploit for investigations opened under the "low threshold" created by Bush.

Like last month's White-House-backed, reform-free Patriot Act extension, this is yet another step the Surveillance State inexorably takes: constantly gathering more and more data on citizens who have been accused of and are suspected of having done nothing wrong, without any oversight or accountability.  This is par for Obama's course.  As Yale Professor Jack Balkin recently put it to Jane Mayer about the Obama presidency: "We are witnessing the bipartisan normalization and legitimization of a national-surveillance state."  This state, as much as anything, is devoted to gathering as much intrusive data as possible about as many citizens as possible without a shred of oversight or suspicion of wrongdoing: exactly that which has proven to create inevitable abuse and exactly that which the Fourth Amendment sought to bar.

But it's the article on Obama's efforts to re-woo the Wall Street tycoons who funded much of his 2008 campaign that is particularly revealing, as it highlights the real election taking place:

"The first goal was to get recognition that the administration has led the economy from an unimaginably difficult place to where we are today," said Blair W. Effron, an investment banker closely involved in Mr. Obama's fund-raising efforts. "Now the second goal is to turn that into support" . . . .

Members of the president’s economic team and his chief of staff, William M. Daley, a former banking executive, have been more active in reaching out to Wall Street executives about policy issues, donors said.

One Democratic financier invited to this month’s dinner, who asked for anonymity because he did not want to anger the White House, said it was ironic that the same president who once criticized bankers as "fat cats" would now invite them to dine at Daniel, where the six-course tasting menu runs to $195 a person.

The article notes that "the president's top financial industry supporters say they are confident that the support Mr. Obama needs will ultimately be there." That confidence -- despite his early, isolated anti-tycoon rhetoric and his tepid financial reform package, both of which petulant Wall Street executives disliked -- seems wholly warranted. While millions upon millions of Americans continue to suffer greatly under the country's ongoing economic woes without any end in sight, the Obama years have, indeed, been very, very good to this tiny constituency of wealth he's now eagerly courting.  And with a Chief of Staff like Bill Daley and a Treasury Secretary like Tim Geithner, it's hard to imagine this effort triggering anything other than ultimate success.

The article also notes that one possible threat to Obama's plan would be a Romney candidacy, as Wall Street would love to back one of their own, and Romney -- who amassed a fortune by saddling companies with debt and then firing huge numbers of their employees -- is the very essence of what Wall Street loves.  Thus, what we would very possibly have in 2012 are two presidential candidates who endlessly tout their populist credentials while doing everything in reality to compete with one another over who can best serve the nation's oligarchs. In other words, it would be a perfect microcosm for our political system -- just like Obama's expanding the Surveillance State while simultaneously trolling for Wall Street cash.

Speaking of illustrative microcosms, I highly recommend this superb Op-Ed by Stephen Kohn on how the Founders viewed the need to protect whistleblowers and how far away we have moved -- and, especially over the last couple years, continue to move -- from that vision.

UPDATE:  Do you think the White House's desperation for Wall Street cash for the President's re-election campaign, and their eagerness to deprive the GOP of that cash, had any bearing on the Obama administration's failure to meaningfully investigate -- let alone prosecute -- the criminal role played by Wall Street banks in the 2008 financial collapse?  Perish that thought.  At least New York Attorney General Eric Schneiderman continues, at least seemingly, to be indifferent to those considerations.


UPDATE II:  The Huffington Post's Sam Stein obtained a memo from Obama's re-election campaign to the White House regarding one of Obama's top 2008 bundlers -- Ed Haddock, the CEO of for-profit Full Sail University -- who had "stopped being 'helpful' in 2009 and is currently being courted by former Massachusetts Governor Mitt Romney." The memo urges the White House to make him feel as though he has special access for his policy issues in order to induce financial support, generating this well-supported headline:

That the White House would provide special access to a top donor is, of course, anything but surprising, though it helps answer the question I posed in the prior Update and is yet another prime example of that against which candidate Obama incessantly inveighed but which President Obama enthusiastically practices.