Dirk Nowitzki leads his Dallas team into Miami, walks away with a championship 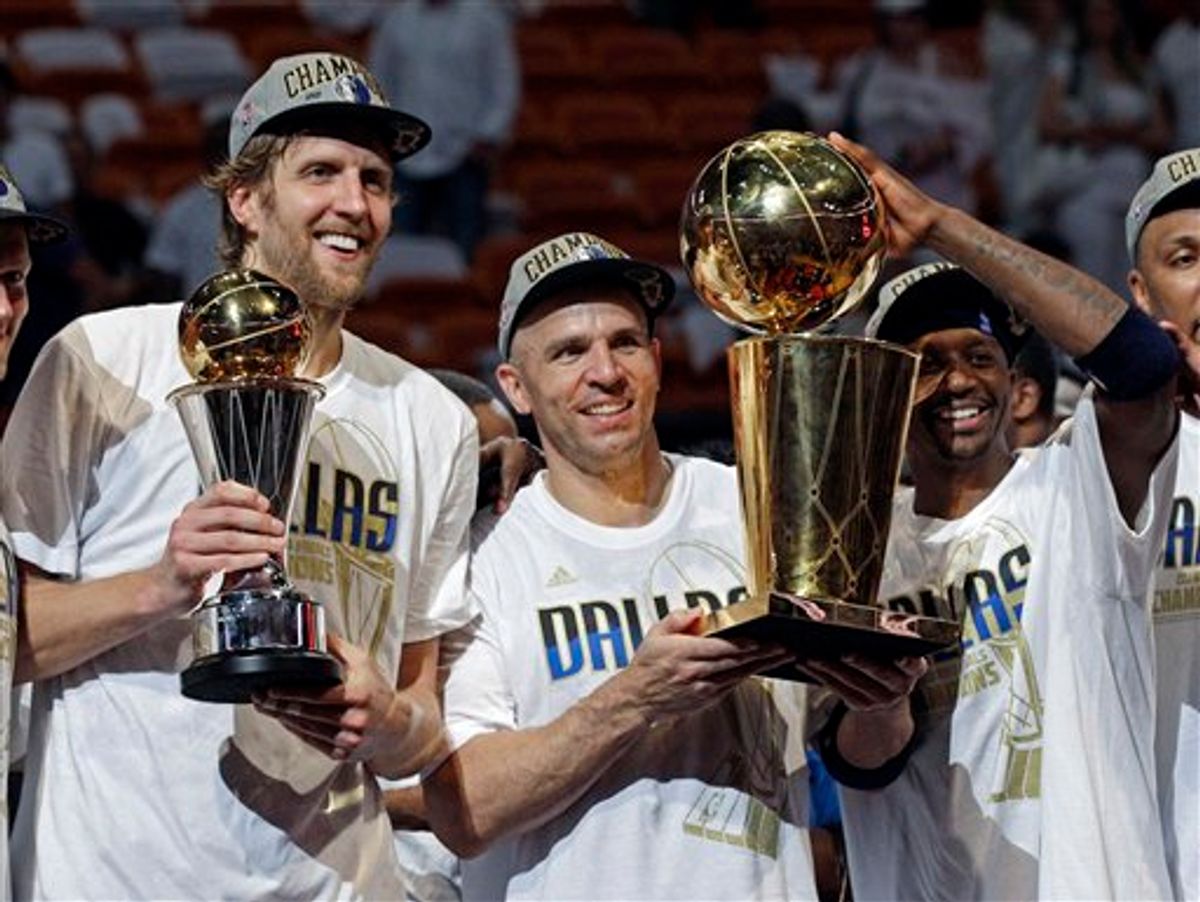 The Dallas Mavericks beat the Miami Heat 105 - 95 in game six of the NBA Finals Sunday night. For the Mavs this meant a first ever NBA championship and revenge for a 2006 Finals when they were defeated by the Heat. This year, the Mavs won four of the five final games of the series to lift the championship trophy they had long worked for.

Despite his unmiraculous performance Sunday, much of the post-game attention has focused on Mavs star forward Dirk Nowitzki -- named Finals MVP.

"Nowitzki has forever been the sun the Mavericks’ planets surrounded, an orbiting galaxy of coaches and teammates that have come and gone. He was the constant, the conscience of a franchise that invoked his ethic, his character, his relentless pursuit of victory. No one worked harder. No one worked longer," the New York Daily News wrote.

"I really can't believe it," an emotional Nowitzki said after the game.

The Mavs win in Miami tells a story of perserverance over star power. As CNN noted, "The loss was devastating for Miami, a team that seemed to be put together for a championship... Before the season, the Heat added perennial all-star forward Chris Bosh and superstar forward LeBron James to a team that was headed by talented guard Dwayne Wade."

Let's recall how Miami welcomed "the big three" (James, Bosh and Wade) to MIami, in what now looks like an excercise in ill-fated hubris:

ESPN writes that much blame for Sunday's loss will sit on James' shoulders:

Make no mistake: Miami lost the Finals, but the blame will be directed at James. Even he knew that after the way he left Cleveland with "The Decision" and all the animus that generated not just in Ohio but around the entire league, the only way he could silence some critics was with a title.

Miami had chances to take command and wasted them all. The Heat missed 13 of their 33 free throws, let the Mavericks score 27 points off turnovers and simply could not get a rebound in the final minutes. Nowitzki finished 9 for 27, and the Mavs still won. He was 1 for 12 in the first half, and they were still ahead, 53-51, thanks largely to Terry's 19 points on 8-of-10 shooting.

And for Terry, the victory comes as vindication of a risky tattoo decision, reports CNN:

Terry said he had the Larry O'Brien championship trophy tattooed on his right bicep before the season began because he was confident the Mavs would clinch the title. Losing would've been painful for Terry, literally, as he said he would have the tattoo removed.

Watch ESPN's recap of the Mavs' run to Finals triumph: