As fighting rages for a fourth day, German foreign minister pays a surprise visit to the de facto rebel capital 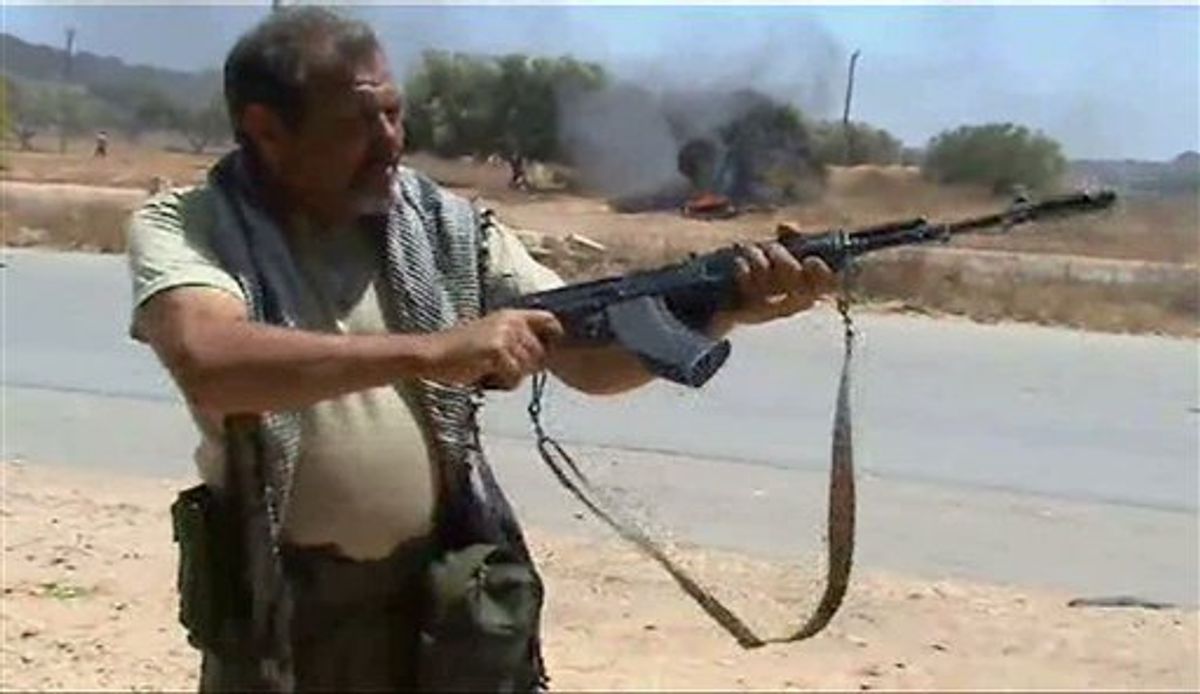 In this image taken from TV, showing rebel forces on the front line as they repel government troops, Sunday June 12, 2011, in Dafniya, Libya. as fighting continued on Sunday near Libya's main port of Misrata, a western redoubt of the rebels. Video of the battle shows rebels advancing down a road, firing automatic weapons, guns mounted on pick up trucks, rockets and heavy artillery. (AP Photo/APTN) TV OUT (AP)
--

Government artillery rained down on rebel forces Monday but failed to stop their advance into key ground west of their stronghold at Libya's major port. As fighting raged for a fourth day, Germany's foreign minister paid a surprise visit to the rebels' de facto capital.

The German foreign ministry said Guido Westerwelle was meeting with the Transitional National Council to deepen relations with the rebels and their nascent government.

Should the Germans recognize the council as the legitimate governing power in Libya, it would mark yet another big diplomatic boost for the rebels who rose up four months ago to end Moammar Gadhafi's 40-year rule in the oil-rich North African country. Germany refused to participate in the NATO air mission over Libya and withheld support for the no-fly zone.

The rebels control roughly the eastern one-third of Libya as well as Misrata, the country's major port. The also claim to have taken parts of coastal oil center of Zawiya in the far west. That port city is 18 miles (30 kilometers) west of Tripoli and a prize that would put them in striking distance of the capital. Control of the city also would cut one of Moammar Gadhafi's last supply routes from Tunisia.

Despite rebel claims, government spokesman Moussa Ibrahim said late Sunday that Gadhafi forces had driven off the attackers, and reporters taken to Zawiya saw secure streets and the green national flag flying over a central square. The insurgents, for their part, claimed a high-ranking Gadhafi commander was badly wounded in the fighting.

"The wishful reporting of some journalists that the rebels are gaining more power and more control of some areas is not correct," he said.

In the major fighting near Misrata on Monday, an Associated Press photographer at the rebel front lines said they had pushed along the Mediterranean Sea to within 6 miles (10 kilometers) of Zlitan, the next city to the west of Misrata. A rebel commander said his forces, using arms seized from government weapons depots and fresh armaments being shipped in from Benghazi, planned to have moved into Zlitan, by Tuesday.

Ali Terbelo, the rebel commander, said other opposition forces already were in Zlitan, trying to encircle Gadhafi troops. If the rebels take the city they would be within 85 miles (135 kilometers) of the eastern outskirts of Gadhafi's capital, Tripoli.

An AP reporter with government forces said shelling was intense Monday morning with rockets and artillery and mortar shells slamming into rebel lines west of Dafniya at a rate of about 7 each minute. Dafniya is about 20 miles (30 kilometers) west of Misrata

Officials at Hakima Hospital in Misrata said government shelling killed seven and wounded 49 on Sunday. New casualty figures were not available but ambulances were rushing from the Dafniya line back into Misrata.

The rebel thrust at Zawiya and movements farther east -- near Misrata and Brega -- suggested the stalemated uprising had been reinvigorated, and that Gadhafi's defenders may become stretched thin.

"Over the past three days, we set fire under the feet of Gadhafi forces everywhere," Col. Hamid al-Hasi, a rebel battalion commander, told AP. He said the rebels attacked "in very good coordination with NATO" to avoid friendly-fire incidents. "We don't move unless we have very clear instructions from NATO."

In addition, the NATO blockade of ports still under government control and alliance control of Libyan airspace have severely crimped the North African dictator's ability to resupply his forces. And his control has been hard hit by defections from his military and government inner circle.

NATO, meanwhile, has stepped up bombing of Gadhafi's compound in the center of Tripoli, striking it again on Sunday, along with a military airport in eastern Tripoli. The government did not immediately report casualties or damage.