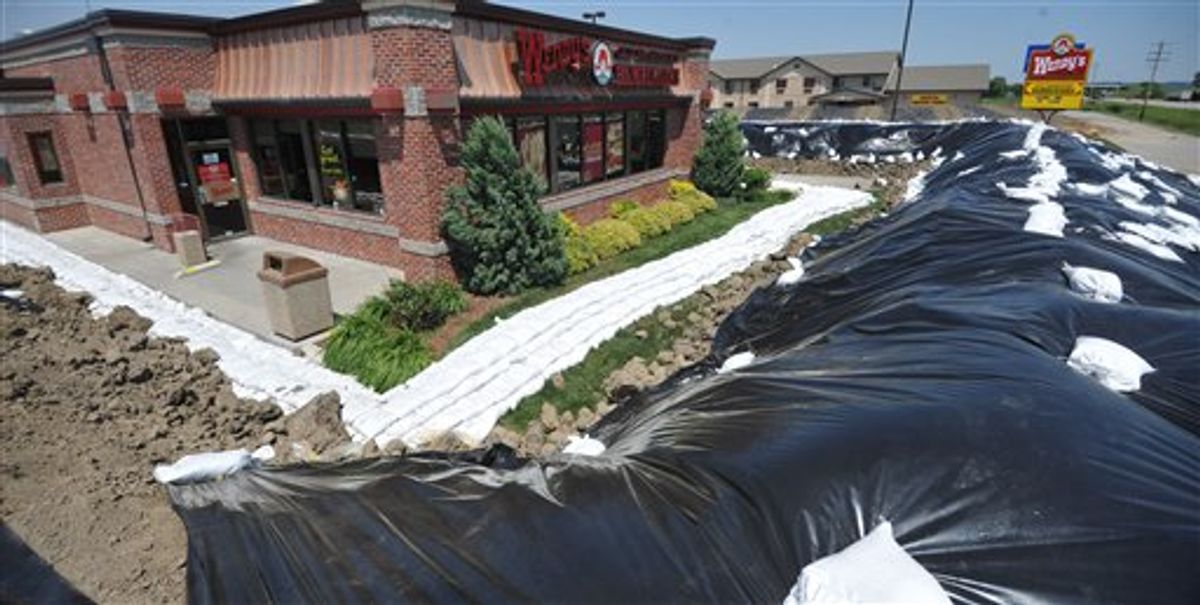 A Wendy's restaurant is surrounded by a temporary berm Monday June 6, 2011 in Hamburg, Iowa. The southwest Iowa town is under a mandatory evacuation order as the Missouri River continues to rise. (Photo/Dave Weaver) (AP)
--

The rising Missouri River broke a 30-foot hole in a levee near the Iowa-Missouri border on Monday, sending torrents of water over isolated farmland and prompting a flash flood warning for the partially evacuated Iowa town of Hamburg.

Pearson described the breach as "pretty substantial" and said "water is flowing through quickly," but it still must cross several miles of rural land to reach the Hamburg area. Pearson said the floodwaters are expected to reach Interstate 29 and a secondary levee protecting the town of about 1,100 people sometime Tuesday.

State officials said they would close more than 20 miles of the interstate in southwest Iowa and northwest Missouri within the next two days.

The Army Corps of Engineers has steadily increased the amount of water it is releasing from dams along the Missouri River to account for excess water from heavy spring rains in the Upper Plains and to clear out space for above-average snowmelt coming down from the Rockies. Releases from the Missouri's five lower dams should reach 150,000 cubic feet of water per second Tuesday -- more than twice the previous record releases.

It wasn't immediately clear how deep the floodwaters approaching Hamburg were on Monday or whether they would prove too much for the secondary levee built last week to protect the town. About 300 Hamburg residents left their homes and businesses last week under an evacuation order issued after the partial breaches in the main levee, located about 5 miles south in rural Atchison County, Mo.

Water was shooting Monday into farmland at one of the same spots where the levee previously leaked, said Terry Holliman, who owns a Napa Auto Parts store in Hamburg.

"It's impressive," Holliman said. "The force is unbelievable."

The Army Corps of Engineers has been building up the secondary levee to protect low-lying areas of Hamburg since the partial breaches in the main levee. Officials had been able to stabilize the initial leaks but had predicted the main levee eventually would fail as it did Monday.

Army Corps of Engineers projections show that if the secondary levee fails, the volume of water released upstream during a levee break could leave 8 feet to 10 feet of standing water in the southern part of Hamburg. The area includes manufacturing and agricultural businesses. Water could reach the fire station and city hall, but it likely wouldn't reach the northern part of town where most residents live.

An Army Corps of Engineers spokeswoman would not immediately comment on Monday's breach but said a statement was being prepared.

The river is expected to remain high at least into August because as the record releases from the dams continue.