Behind the selective Weinergate outrage of Democrats 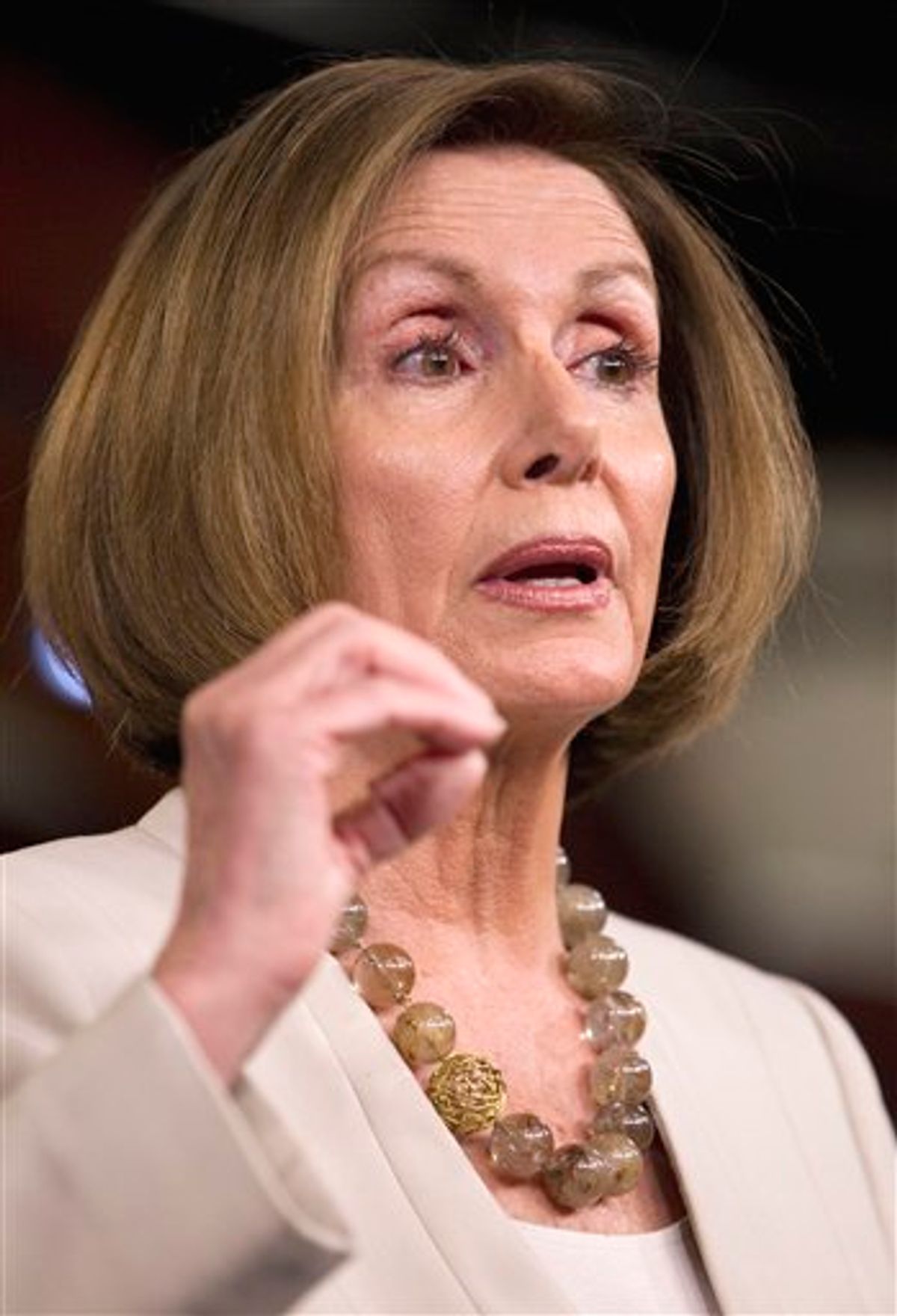 The judgment from top Democrats in Washington has been nearly unanimous so far: Anthony Weiner needs to leave Congress.

Several of his House colleagues, including the woman tasked with recruiting candidates for the 2012 elections, said it in the days following Weiner’s admission last week that he’d sent lewd photos to several young women. And now Nancy Pelosi, the House Democratic leader, and Debbie Wasserman-Schultz, the chairwoman of the Democratic National Committee, have joined the chorus.

"Anthony Weiner needs to resign so that he can focus on his family, focus on his own well-being," Wasserman-Schultz said on Sunday’s "Meet the Press."

At a basic level, the drive to push Weiner out is smart politics for Democrats. After all, before his troubles began to come to light Memorial Day weekend, they were on something of a roll. Opposition to the Medicare plan championed by Republicans had unified their caucus, provided a winning issue in a special election in upstate New York, and was looking more and more like a ticket to gains in next year’s House elections. But no is talking much about Paul Ryan and Medicare now. If Weiner would just go away, maybe they could get back to their "all Medicare, all the time" strategy.

But the outrage being expressed is also highly selective. This becomes clear when you compare Weiner’s problems to those that his New York colleague, Charlie Rangel, recently faced.

From what we know now, Weiner’s sins involve lying in private to his colleagues and in public to reporters and to his constituents about something that is, essentially, a personal matter. There is no evidence that any of the women he communicated with were minors or that any crime was committed. It is also possible, but not yet proven, that he used the phone in his House office for consensual, sexually-charged conversations; this, presumably, will be taken up by the ethics committee. Weiner has apologized for his conduct and also over the weekend requested a leave of absence from the House in order to pursue counseling.

The response to all of this from the top Democrat in the House, the party’s national chairwoman, and several other House leaders is: Resign immediately!

Now, consider the case of Rangel, who was confronted with a series of stories about unpaid taxes and serious ethics violations in the summer and fall of 2008. Among other things, it was revealed that Rangel had failed to pay taxes on $75,000 in rental income generated from a villa he owned in the Dominican Republic; that he was using a rent-controlled New York City apartment as a congressional office and hadn't paid the appropriate taxes; and that he’d used his official congressional stationary to solicit donations from high-powered donors for a college program that was being established in his name.

Rangel, who was the chairman of the tax-writing Ways and Means Committee when all of this came to light, almost immediately admitted that he’d failed to pay taxes but insisted that "I personally feel that I have done nothing morally wrong." He said that he wouldn’t step down as chairman and in the summer of 2008 asked the ethics committee to review the situation.

And the response from Pelosi and other top Democrats? Silence. To the extent she’d say anything about the subject, Pelosi would simply point out that the ethics committee was looking into it and that she’d reserve comment and judgment until after it had reported its findings. Of course, the ethics committee moves about as quickly as Heinz ketchup, so Pelosi maintained this posture for well over a year -- even as Republicans ratcheted up their attacks on Rangel and their cries of hypocrisy (Pelosi had promised to run "the most ethical Congress in history"). It was only in March 2010, when the ethics committee completed a portion of its review and found Rangel guilty of accepting corporate-sponsored trips to the Caribbean, that Pelosi stepped in and pushed Rangel to take a "temporary" leave as Ways and Means chairman.

It’s hard to argue that Weiner's transgressions, as humiliating as they are to him personally, are nearly as serious as Rangel’s. And yet Pelosi and most other top Democrats were reluctant to speak out against Rangel publicly, much less to call for his exit from Congress -- even though he was every bit the public relations liability that Weiner is now.

The explanation for this is simple: Rangel had a lot more allies and a lot more clout within the House Democratic caucus than Weiner has.

By the time his troubles hit in 2008, Rangel had been in Congress for nearly 40 years. He’d been a founding member of the Congressional Black Caucus, a group that had grown to include more than 40 Democrats and come to play a vital role in caucus politics. And when Rangel’s troubles hit, Pelosi was already on thin ice with the CBC.

Just two years earlier, she’d angered many in the group by pushing to remove William Jefferson from his Ways and Means seat after federal agents raided his home and found $90,000 in the freezer. Jefferson had yet to be indicted and was maintaining his innocence, and CBC members accused Pelosi of violating due process. And months after the Jefferson episode, she’d bypassed Florida’s Alcee Hastings (another CBC member), who had been in line to chair the Intelligence Committee, because of Hastings own severe ethical baggage. (He’d been impeached as a federal judge in the 1980s after a corruption scandal.) Thus, when Rangel’s issues came to light, Pelosi was hamstrung. He was, after all, no ordinary CBC member -- he was a founder. So she was forced to bite her tongue and wait for the ethics committee to give her cover to speak out -- a process that ended up taking nearly two years.

Weiner has no similar cover. And he really has himself to blame. In 13 years in the House, he’s developed a reputation as a showman who’s uninterested in hard work -- or in cooperation. For the first decade or so of his tenure, he focused more on New York City politics than on the national scene, positioning himself for a mayoral bid. Only in the last few years, when his planned 2009 campaign for mayor was ruined by Michael Bloomberg’s campaign to overturn the city’s term limits law, did Weiner become a prominent figure in Washington, mainly through colorful House floor speeches and appearances on cable news.

But this new profile irked his colleagues, even those who should have been his allies. For instance, Weiner made lots of noise advocating a single payer program during the 2009 and 2010 healthcare debate. But his crusade did not go over well with longtime single payer advocates in the House, who concluded that he was more interested in using the issue to make himself more appealing to liberal voters than in actually making progress on it. As the Washington Post’s Jason Horowitz reported last week:

"Anthony wanted to go to the House floor to present a single-payer bill," [Rep. Henry] Waxman said in an interview.

That was shocking news for some of his liberal colleagues in the House, who said they had worked for years on single payer without hearing a peep from him. It was also unwelcome.

"To call a vote in that environment would have damaged single payer for the future," said one representative involved in the negotiations. "We were trying to protect it from a vote because we saw the handwriting on the wall."

In other words, while Weiner plays a progressive hero on television, most progressives in the House see him as something quite different -- and aren’t about to invest whatever clout they have in defending him.

Nor is Weiner getting any help from his home state’s sizable Democratic delegation. Again, he has himself to blame. Here, the story of last summer’s House debate over a bill to provide healthcare for 9/11 first responders is worth keeping in mind. Weiner's rant against Republican obstruction did wonders for his own visibility, but infuriated some of his fellow New York representatives, especially those who -- unlike Weiner -- had put in long hours behind the scenes crafting the bill and seeking to win support from Republicans. Per the Post’s Horowitz:

"He almost blew up the [expletive] bill," said one representative from New York, who spoke on the condition of anonymity.

According to the representative, Democrats worked for months with GOP Rep. Peter T. King (N.Y.) to bring more Republicans on board. Then, when the bill had a procedural setback, Weiner, who had not been especially active behind the scenes, took to the floor to lambaste his Republican colleague.

"Peter King was our ally!" the representative said.

It’s not a coincidence that the only two New York Democrats to speak up in Weiner’s defense are Rangel -- who surely recognizes that he’s in no place to call for anyone’s ouster -- and Ed Towns, a Brooklyn Democrat who has been a thorn in Pelosi’s side for years.

Weiner’s fans argue that he's a valuable House member because of his skills as a television communicator, even if he’s never authored any legislation that became law. But it’s clear that his fellow Democrats in the House -- particularly those in influential positions -- do not share this view. To them, Weiner has long been an annoyance, and now he’s a political liability too. And there’s nothing compelling them to bite their tongues.