The tired dad behind "Go the F**k to Sleep" 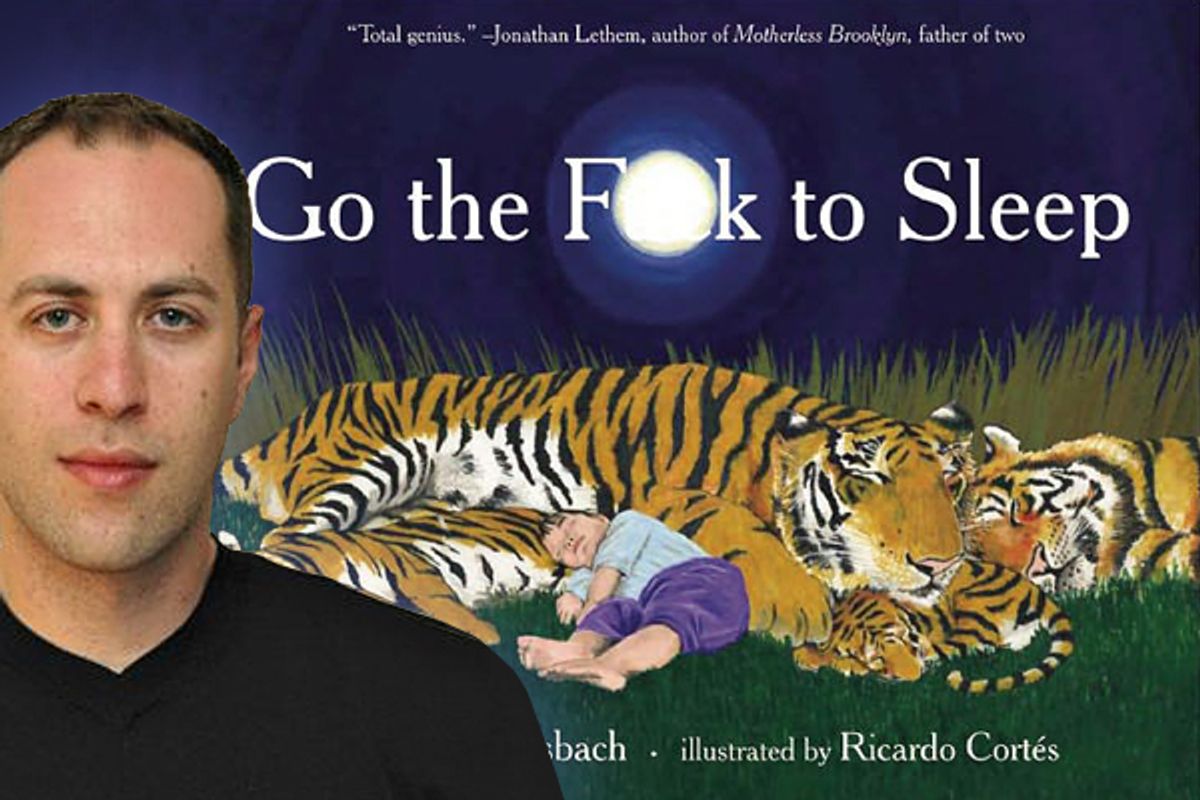 If you've ever had a young child, it's likely you've had that moment. The one when you realize your precious bundle of joy is in fact a CIA operative on a mission to break your will. Her tactics? Loud noise, incessant, impossible to fulfill demands, and, most cruelly of all, relentlessly subjecting you to constant sleep deprivation. In those long, dark helpless nights of torture, you feel like weeping, like pleading to your offspring for mercy. Or maybe just telling her to go the fuck to sleep.

Adam Mansbach knows the feeling. Unlike you or me, however, he's turned "Go the F**k to Sleep" into one of the most buzzed about books of the year. What began as an offhand Facebook update -- "Look out for my forthcoming children’s book, 'Go the Fuck to Sleep'"--  has landed in its first week of publication at the top of the New York Times bestseller list, with a stunning print run of more than 300,000 copies and an option for a movie. Who knew the torments of early parenthood could be so fruitful?

In conversation, Mansbach, author of the novels "Angry Black White Boy" and "The End of the Jews," sounds neither angry nor especially profane. His phone manner is clear-spoken and polite, and he repeatedly emphasizes that his book is not meant as an expression of anything you should ever say directly to a child. When I mention Louis C.K.'s maxim that you're not really doing the work as a parent if you haven't given your child the finger behind her head, he laughs somewhat uncomfortably.

The father of now 3-year-old Vivien was simply going through a period of bedtime battleground exasperation a year ago when he posted that now famous vent on Facebook. But his facetious comment struck a profound chord. Soon friends were encouraging him to really give the world his imaginary opus, and he felt a surge of creativity. "I came up with about nine verses pretty easily," he says. "Then I looked at some children's books and figured most of them are 14 verses. I knew I already had something close to a book."

With verses like "The flowers doze low in the meadows, and high on the mountains so steep. My life is a failure, I'm a shitty-ass parent. Stop fucking with me, please, and sleep," and adorably dreamy illustrations by Ricardo Cortés, the book reads like Margaret Wise Brown crossed with David Mamet. In other words, the ultimate postmodern bedtime story. More than that, however, it taps into the guilty secret of parenting, especially parenting small children, too young yet to stink or sass back: that those sweet moppets can be real little dictators.

Yet Mansbach plays that wrung-out parental feeling delicately. "People get that it's a joke," he says. "The parent isn't really saying this to the child. There's this familiar, lulling bedtime story mixed with the internal monologue of the parent." It works because the hostility isn't overt, and because sometimes, in the cuddly nightmare of Barney songs, peekaboo games and childproofed cabinets, all you have left is your sense of humor and your most colorful Anglo-Saxonisms.

Though Mansbach acknowledges the flukiness of his success, he also knows that success often is flukey. "I did an NYU event recently with Pharoahe Monch," he says. "Do you know his song 'Simon Says'? It's his biggest hit; it's what he's known for. And he told me it was the easiest thing he ever wrote. When you're writing a novel you're operating on a different pace. I think there's something very honest about this kind of intensity." But it's not like every tossed-off status update is a bestseller waiting to happen. Mansbach was already an acclaimed author when his profanely winning idea hit. It's nice to be clever, but it helps even more to be an established writer who can pull the work together and get it out there in the marketplace.

Understandably, there's a lot of pressure on him now to come up with a sequel. "I don't want to write 'Eat Your Fucking Vegetables,'" he says. "With the bedtime story, there's a form that everybody knows. And besides, nobody goes crazy over not eating vegetables." Instead, he says he's mulling a clean version that parents really can feel OK about reading to their children. His own bundle of inspiration, Vivien, meanwhile, is too young to read "Go the F**k to Sleep' but she has looked at it with him. She gets a kick, he says, out of seeing her own image in it. And even better -- better, in its own way, than a bestseller -- Mansbach adds that a year after his life-changing status update, Vivien sleeps just fine now.