When I stole a handicapped parking spot

After Mom got her placard, I confronted anyone I saw cheating. Then I found myself taking the only marked space 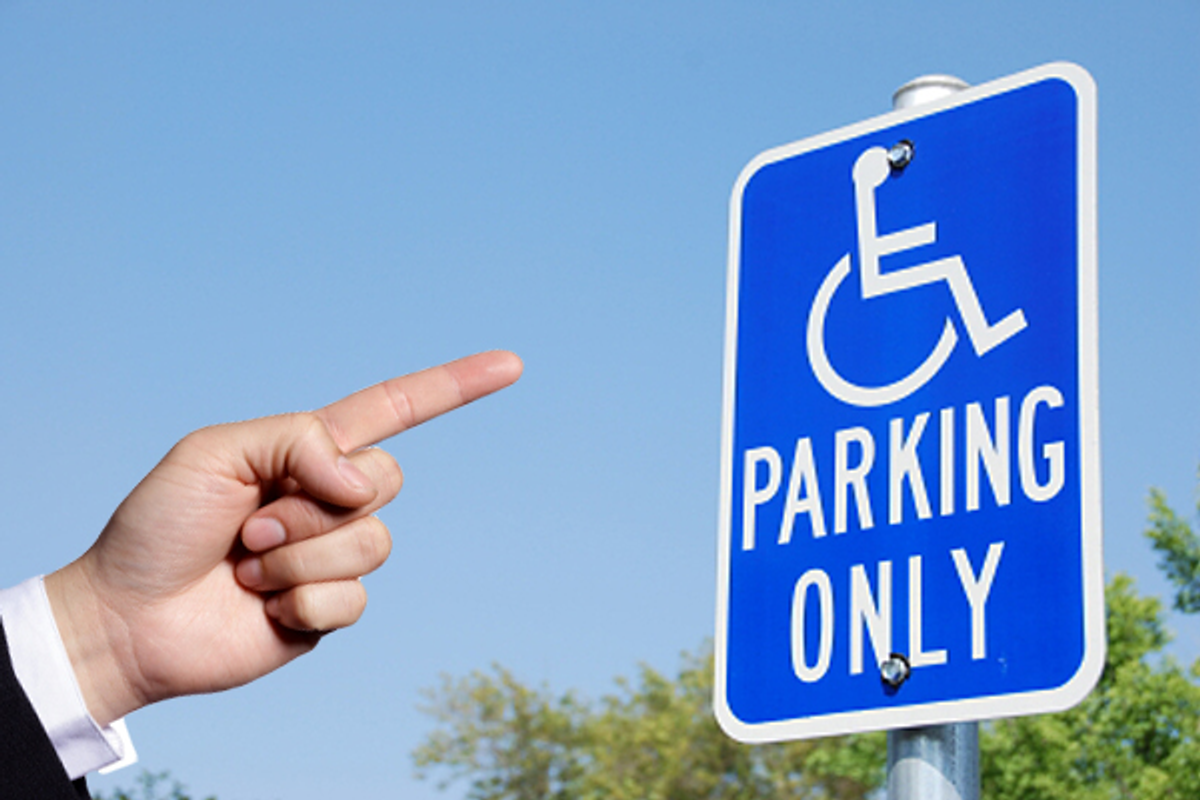 I admit it, I can get kind of righteous. I have confronted smokers who flick their cigarettes to the ground by picking up the butt and haughtily returning it to them, declaring, "I think you dropped something." I have raised a modest ruckus or two when someone cuts in front of another in a checkout line. I will return junk mail with a "Refused -- return to sender" scribbled on it, and though I know it does little good, I just don't want to be the one to throw it in a landfill.

I mean, if I don't straighten out the world, who will?

It happened that I lived with my parents for a few months during a transition in my adult life. At the time, mother had arthritic knees and knee replacement surgery was imminent. For years I'd watched as the pain in her legs grew worse and downright debilitating. It got to the point that even the most minor outing turned into an expedition that required judicious planning.

She finally broke down and got a handicapped parking card. Even a few yards made a lot of difference when she was trying to get somewhere, and being able to rely on convenient parking gave her a greater sense of independence and control of her life.

And when the little blue placard arrived in the mail, I immediately deputized myself in the name of truth and justice where parking was concerned. I was constantly on the lookout for ne'er-do-wells using the specially designated spots when they oughtn't. If a permit wasn't visible, I'd ask to see it. (I even went so far as to shoot people nasty looks.) Once I alerted a mall security guard when I spotted a scofflaw. Yes, wherever honest parking was in peril, Mary Jo Pehl was there.

And then, I began hanging out with my mother. A lot. I would go with her just to be able to park close to whatever establishment we deigned to visit. During those few months I spent more time with her than I had in my whole life. I didn't want to go to Costco, I didn't want to go to Over 55 Water Aerobics, I didn't want to go to Old County Buffet, but a secret thrill coursed through me when we'd pull up just a few feet from the door. I became sort of heady with power. (I guess I was just lucky there was no small nearby country begging to be annexed. Who knows how I may have wielded my perceived might.) Yes, I was riding my mother's incapacitated coattails.

One day she asked me to run to the drugstore to pick up some medications. I played it cool but I couldn't wait to park. Hopping in her car, I drove up to the strip mall and breezily pulled into the sole handicapped-parking space where I hooked the placard on the rearview mirror and opened the door. At that moment, a car with a handicapped-parking card pulled in next to me.

I froze. Humiliation rigor-mortification set in. I, entirely able-bodied, was doing a bad, wrong thing and I'm Midwestern and Catholic, and I always feel like I'm doing something bad and wrong, even when it's something routine and legal, like folding laundry.

I tried to sneak out of the car. By this time the driver had come around to my side where I was overly casually trying to lock the door. One of his pant legs was loose from the knee down.

"So, what happened to you?" His tone was merely curious.

I've never been quick on my feet, and I said the only thing that came to mind.

But it came out in a weird, tough-guy voice that startled me when I heard myself utter it. You might have thought there was a Marlboro dangling from my lips or that I had "love" and "hate" tattooed on my knuckles. The closest I've ever come to having a baby was being an aunt. I can barely tell a newborn from a freshly packaged chicken at the grocery store.

He looked at me quizzically.

"Big one," I added gruffly.

I was digging myself in deeper with a backhoe, and I was thoroughly disgusted with myself. Another unnatural voice came out of me, one gratingly and unnaturally perky.

He'd been in a terrible car accident.

Again a voice I did not recognize took over. With a huge smile, I declared loudly, "Oh, wow!" As if that were the most exciting news I'd had that day, as if congratulations were in order, as if I were thrilled about the whole thing.

We stood there, maybe hours, maybe seconds, looking at each other. I couldn't walk into the store because I didn't know how a new mother of a large baby should walk so as to warrant a handicapped parking spot.

At long last he shook my hand. "Nice talking to you -- you take care of yourself," he said and went on his way. I pretend-hobbled back into my mother's car and sat and cried. I cried because of a stranger's gentleness, I cried for his struggle, and I cried because I discovered I was just as rotten as everyone else.

Mary Jo Pehl is writer/performer/producer with Cinematic Titanic, the live version of Mystery Science Theater 3000, for which she was a writer and actor. Her book, "Employee of the Month and Other Big Deals," will be published in summer 2011.