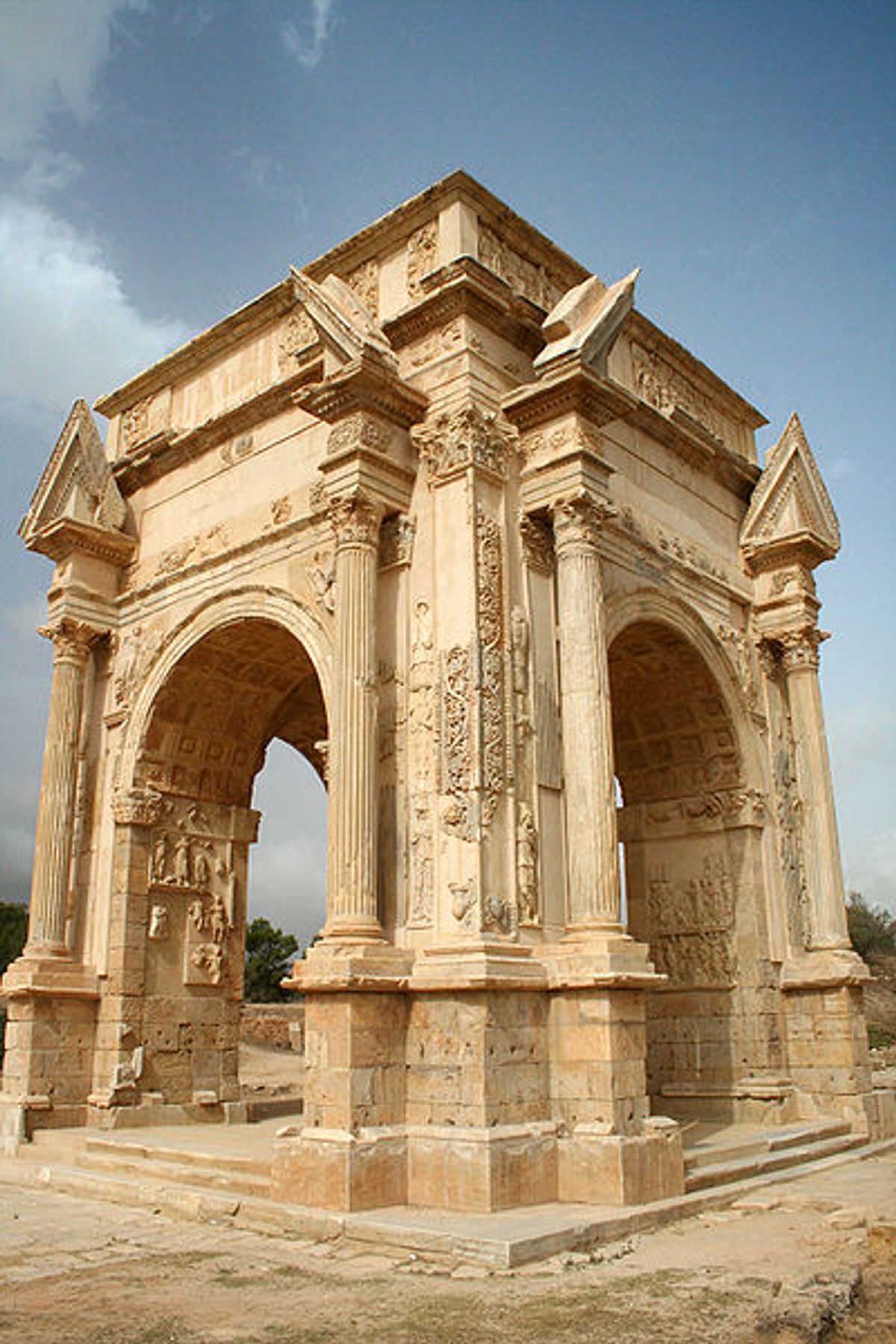 The Arch of Septimius Severus at Leptis Magna
--

CNN reported Tuesday morning that NATO "refuses to rule out" bombing Roman ruins at Libya's Leptis Magna, if it turns out that Moammar Gadhafi is hiding weapons there (as rebels claim). More from CNN:

"We will strike military vehicles, military forces, military equipment or military infrastructure that threaten Libyan civilians as necessary," a NATO official in Naples told CNN, declining to give his name in discussing internal NATO deliberations.

But he said the alliance could not verify rebel claims that Libya's leader may be hiding rocket launchers at the UNESCO World Heritage site of Leptis Magna, a Roman city between the capital Tripoli and rebel-held Misrata.

What is -- or was -- Leptis Magna? According to UNESCO, the site was home to "one of the most beautiful cities of the Roman Empire," whose port alone was "one of the chefs d'oeuvre of Roman technology." Founded by Phoenicians roughly a thousand years before the Common Era, Leptis Magna eventually became a part of the Roman Empire; its heyday came during the reign of Emperor Septimius Severus (r. 193 to 211 CE), a native of the city who oversaw major efforts toward its expansion. After flourishing briefly under Roman rule, the port was ultimately claimed by Byzantine and then Arab leaders. For most of the past two millennia, however, it has been a ruin. According to a team of British archaeologists who conducted an excavation at the site in the 1990s, Leptis Magna is "one of the best preserved Roman cities," but has "attracted less attention than [it deserves] -- especially since the political situation in Libya has made travel to the site difficult and tourism a virtual impossibility." The city has been a UNESCO World Heritage site since 1982.

The UNESCO Convention specifies that responsibility for the protection of a World Heritage Site lies primarily with the site's home country. A further clause states:

Each State Party to this Convention undertakes not to take any deliberate measures which might damage directly or indirectly the cultural and natural heritage referred to in Articles 1 and 2 situated on the territory of other States Parties to this Convention.