Jon Huntsman getting into GOP race

The former Utah governor will announce his candidacy next Tuesday 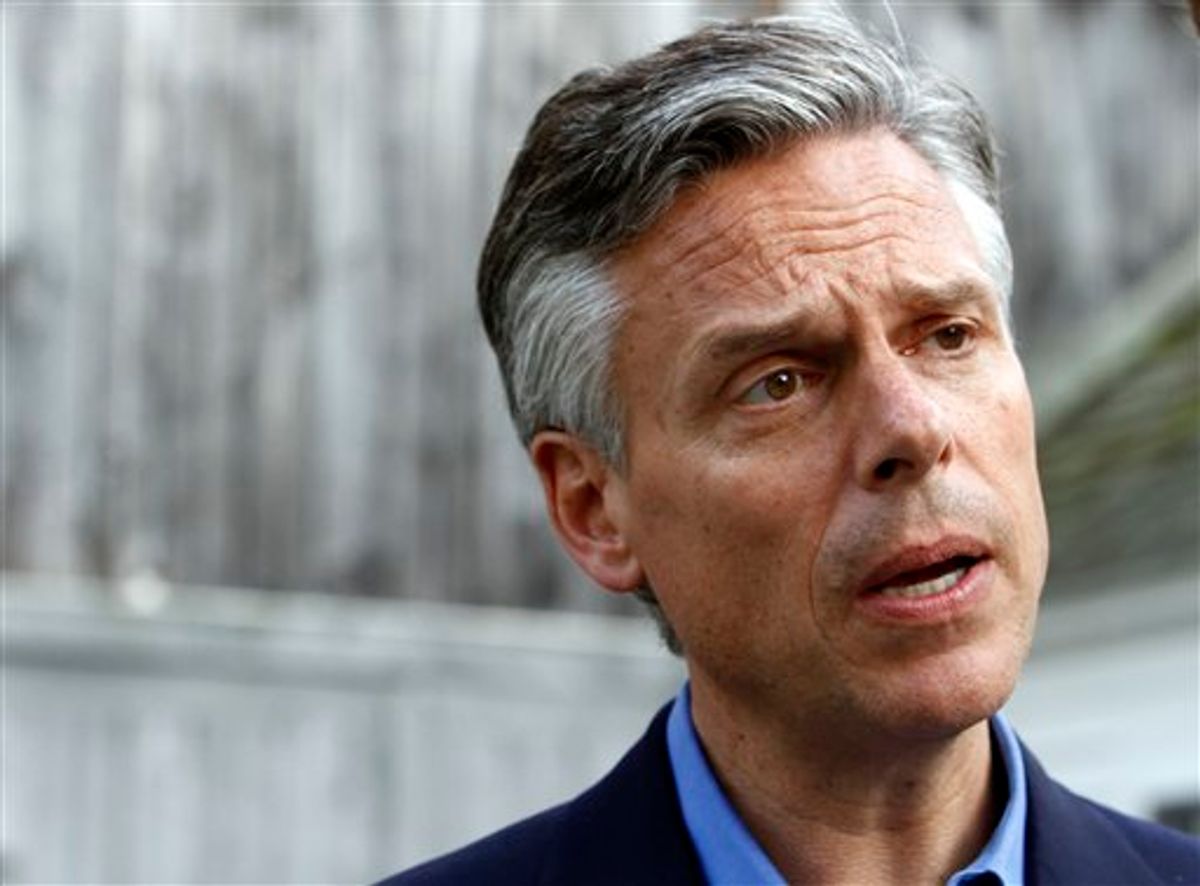 Former Utah Gov. Jon Huntsman, a Republican who until the spring served as President Barack Obama's ambassador to China, is running for president, officials said Tuesday.

The Republican planned to formally announce his intentions June 21 at Liberty State Park in New Jersey, with the Statue of Liberty in the background, these officials familiar with Huntsman's thinking told The Associated Press. They spoke on condition of anonymity because his plans had not been announced.

Huntsman was set to suggest as much later Tuesday in an appearance in New York City, where he was slated to talk about China policy with former Secretary of State Henry Kissinger.

Huntsman, a little-known two-term governor from a conservative state whose moderate stances on some issues and service under the Democratic president could inflame the Republican Party's right-leaning base, enters a GOP presidential field that's taking shape by the week.

Minnesota Rep. Michele Bachmann announced her candidacy on Monday in New Hampshire during a seven-candidate debate in which Huntsman did not participate. He had said he would not participate in debates until he made a final decision about a White House run.

Even so, his entrance into the race has been all but certain for weeks.

Since returning from China over a month ago, Huntsman has focused heavily on laying the groundwork for a full-fledged candidacy. Last weekend, he made his third trip to New Hampshire and he has been building a national campaign to be based in Orlando, Fla.

Huntsman's campaign kickoff is to begin June 21 at the northern New Jersey park where President Ronald Reagan began his 1980 White House run, the officials said, noting Huntsman worked as a staff assistant in the Reagan White House. From there, Huntsman planned to travel to New Hampshire, the first-in-the-nation primary state, and Florida, a perennial battleground and host of the 2012 GOP nominating convention. He also planned stops in his home state of Utah and in the early caucus state of Nevada.

Over the past few weeks, Huntsman has honed a message of service to country and called for civil political discourse. In a field lacking deep foreign policy credentials, Huntsman is pitching himself as a politician with international experience who would help the United States' economy rebound. It's an attempt to appeal to segments of the GOP that care both about foreign policy and domestic prosperity.

The telegenic former governor from a solidly conservative state also has a ready fundraising apparatus. He's personally wealthy and could dip into that fortune for a run. He also has strong ties to the Mormon community, which has shown a willingness to support politicians who are of their faith.

Although he has served in three Republican administrations, Huntsman also served in Obama's administration and that is certain to irk GOP primary voters, many of whom loathe the Democratic president. The Republican has argued that he put service to his country over his personal political ambitions and suggested that he should get credit for doing so.

"Accepting an assignment from everyone's president during a time of war, during a time of economic hardship is putting your country first," Huntsman has said. "I won't shy away from that ... If someone wants to hold that against me, they can."

Huntsman also is not well-known. He ranks in the single digits in early national polls as well as surveys in early nominating states. But many GOP primary voters are undecided and many conservatives are looking for an alternative to front-runner Mitt Romney, the former Massachusetts governor who is attempting his second bid for the GOP nomination.

While Huntsman's record on abortion and gun rights is solidly conservative, his positions on climate change and civil unions for same-sex couples are not. As governor, he backed bills providing civil rights protections to gays and lesbians, and he has said humans have had a role in climate change.

Huntsman's Mormon faith also is a hurdle in key nominating states. Romney -- a fellow Mormon -- discovered as much during his failed 2008 bid. He couldn't persuade evangelical voters who dominate Iowa and South Carolina to overlook their skepticism of his faith.

Huntsman already has said he would bypass Iowa, which holds the lead-off caucuses in February of 2012 and where Christian conservatives have serious influence. Instead, Huntsman's campaign would begin in New Hampshire, where independent voters can cast ballots in either party's primary and are the state's largest political bloc.

From here, Huntsman would compete in South Carolina and Florida in hopes of building momentum and stripping Romney of his front-runner status.

Huntsman long had been considered a serious potential challenger to Obama in 2012. The Democrats' political team sought to sideline Huntsman early, offering Huntsman, a speaker of Mandarin, the China job in 2009. He accepted. The White House was credited by insiders with vanquishing a GOP rival.

But a year later, Huntsman bought a $3.6 million Washington mansion that most recently housed contestants on Bravo's "Top Chef" reality show, and he hinted at national aspirations in interviews. By winter, Huntsman had submitted his resignation, which took effect in the spring.

The oldest of nine children, he dropped out of high school to play keyboards in rock bands. He eventually graduated from the University of Pennsylvania. He later was a staff assistant to Reagan, and also served in the administration of George H.W. Bush as a deputy assistant secretary of commerce and as ambassador to Singapore. He also was a deputy trade ambassador under George W. Bush.

He and his wife, Mary Kaye, have seven children.