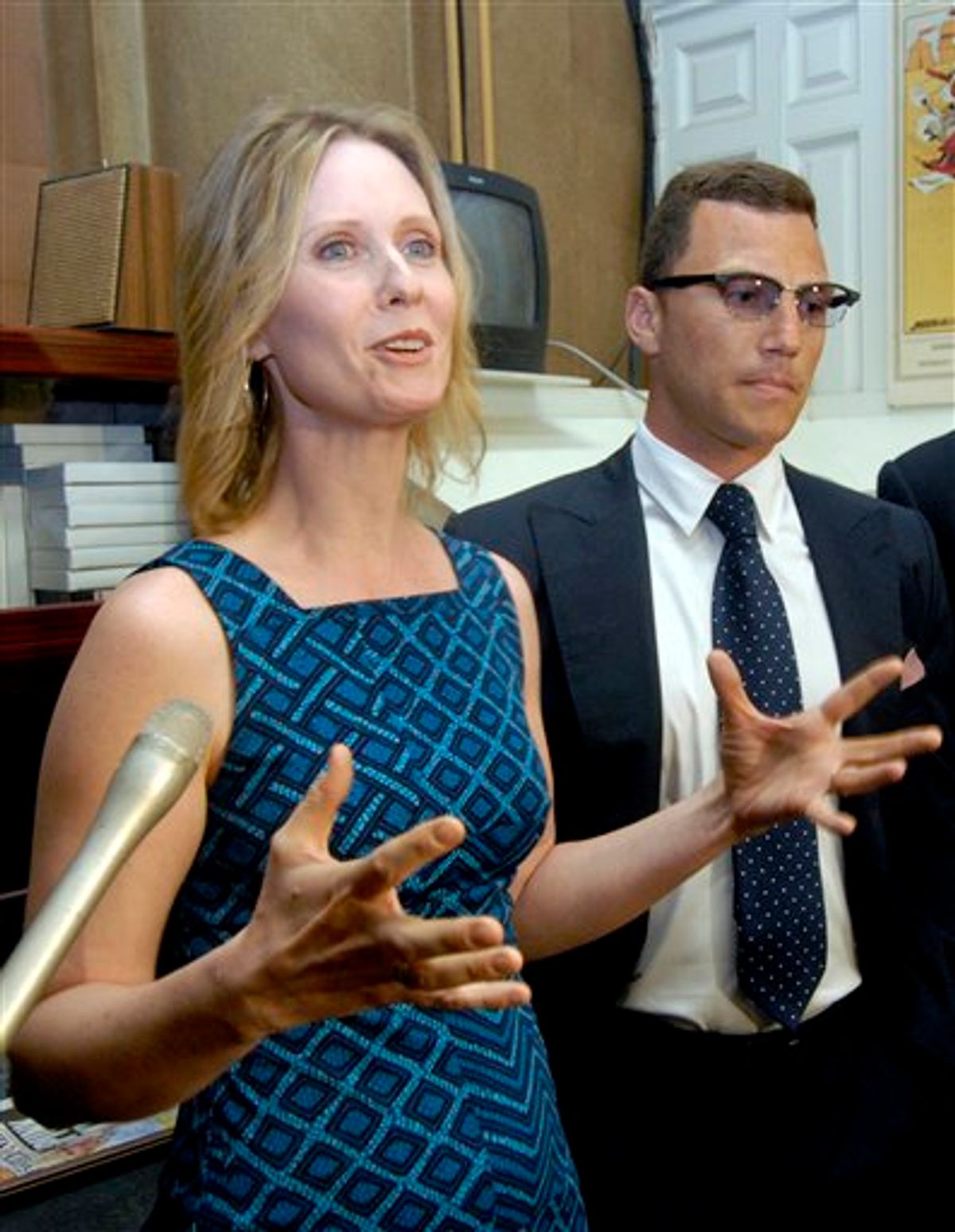 The effort to legalize gay marriage in New York is getting an all-out lobbying effort from Democrats and celebrities, but there's still no sign of wavering among a critical bloc of Senate Republicans who led the defeat of the measure and blunted national momentum two years ago.

Advocates for gay marriage in New York, trying to revive the national campaign, may be just two votes away from winning in Albany in the closing five days of the legislative session.

Each side is funded by more than $1 million from national and state advocates that's being used in media blitzes and in promised campaign cash for lawmakers who side with them. The effort, organized by Democratic Gov. Andrew Cuomo as a top policy objective, drew three Democratic senators and one Republican, James Alesi, to the cause on Monday. Half a dozen senators remain uncommitted publicly and others could still cast surprise votes on the Senate floor, as several did in 2009.

"Many of us thought that Sen. Alesi would be in favor it, so the only difference now is that he's public with it," said Senate Deputy Majority Leader Thomas Libous, a Republican opposed to the gay marriage bill. "So there's not really a net gain there."

The sole Democratic senator opposed to the bill, the Rev. Ruben Diaz Sr. of the Bronx, continues to drum up opposition, saying it's his calling.

"In those countries, government presumes to 'redefine' rights, relationships, values and natural law," Dolan stated. He said "courageous" senators are facing a "stampede" of lobbying to change their votes. "But, please, not here! Our country's founding principles speak of rights given by God, not invented by government."

Legalizing gay marriage in New York, the media capital of the world and a major tourist destination, is a critical win for the national effort. Same-sex marriage is legal in Connecticut, Iowa, Massachusetts, New Hampshire, Vermont and Washington, D.C. But the effort has flagged since the 2009 defeat in New York, which surprised some advocates. Opponents are bolstered by defeats of similar bills in Maryland and Rhode Island this year, and recent polls have shown New Yorkers slightly less supportive of gay marriage as the issue gained more attention this year.

Whether the Democrats' stepped-up campaign this week in New York reflects growing momentum or a desperate effort to provide themselves some political cover will be played out by Monday, the last scheduled day of the legislative session. Republicans plan to conclude as early as Friday.

"Hundreds of thousands of other New Yorkers, like me, are treated like second-class citizens," said "Sex in the City" star Cynthia Nixon in her latest lobbying in Albany. She said Tuesday she's been engaged to another woman for seven years but unable to marry in her home state.

"It's time we treat all committed couples equally," said Sean Avery, a New York Ranger and one of several professional athletes and celebrities including Lady GaGa who have pressed for gay marriage.

Cuomo's bill was expected to be sent to the Senate on Tuesday. It will be discussed in a closed-door Republican conference on Wednesday, where the first vote count could be held. But as in 2009, several senators are expected to disclose their position only in the floor vote, a dramatic moment rare in Albany where most issues are decided by majority conferences long before a public vote.

Republican Sen. Greg Ball said Tuesday that "arrogance" on the extremes of both sides of the issue has stopped real debate and negotiation on Cuomo's bill. The Democratic governor says the bill doesn't include additional religious exemptions, key to attracting votes from Ball and others who want churches, religious groups and individuals opposed to gay marriage exempted from performing or hosting gay marriages.

"I think if the governor pays real respect to the need for religious carve-outs and builds that into this bill, creating a clear definition between civil marriage and religious marriage, it's going to take the wind out of the sales of people like Jason McGuire who are against the bill," Ball said. "To the extent that's not done, I don't see how you get it passed."

Cuomo flatly said "no" when asked Tuesday if his bill will include the additional religious exemptions sought by McGuire, an Elmira pastor and president of the New Yorkers Family Research Foundation, who says gay marriage damages children.

A group of 734 clergy and lay leaders disagrees with McGuire.

"Our faith traditions teach us that all people are children of God, deserving of love, dignity and equal treatment," said the Rev. Tom Goodhue, executive director of the Long Island Council of Churches. "It would be a blessing if New York were to allow loving, committed gay and lesbian couples to be married."

Just 14 percent of New Yorkers said gay marriage should be the top priority of the Legislature, which also is wrestling with fiscal issues, according to the Siena College poll released Monday. But 55 percent of those polled support a same-sex marriage law, compared with the 40 percent opposed. That's down from a high of 58 percent in April. The poll questioned 819 registered voters June 5-8 and had a margin of error of plus or minus 3.4 percentage points.

Republican senators, however, are doing extensive polling within their districts and some said several upstate districts still strongly oppose same-sex marriage. Cuomo acknowledged that Monday but said statewide polls show support and the Senate should represent the whole state.