Impartiality of judge who ruled Prop 8 unconstitutional is in question 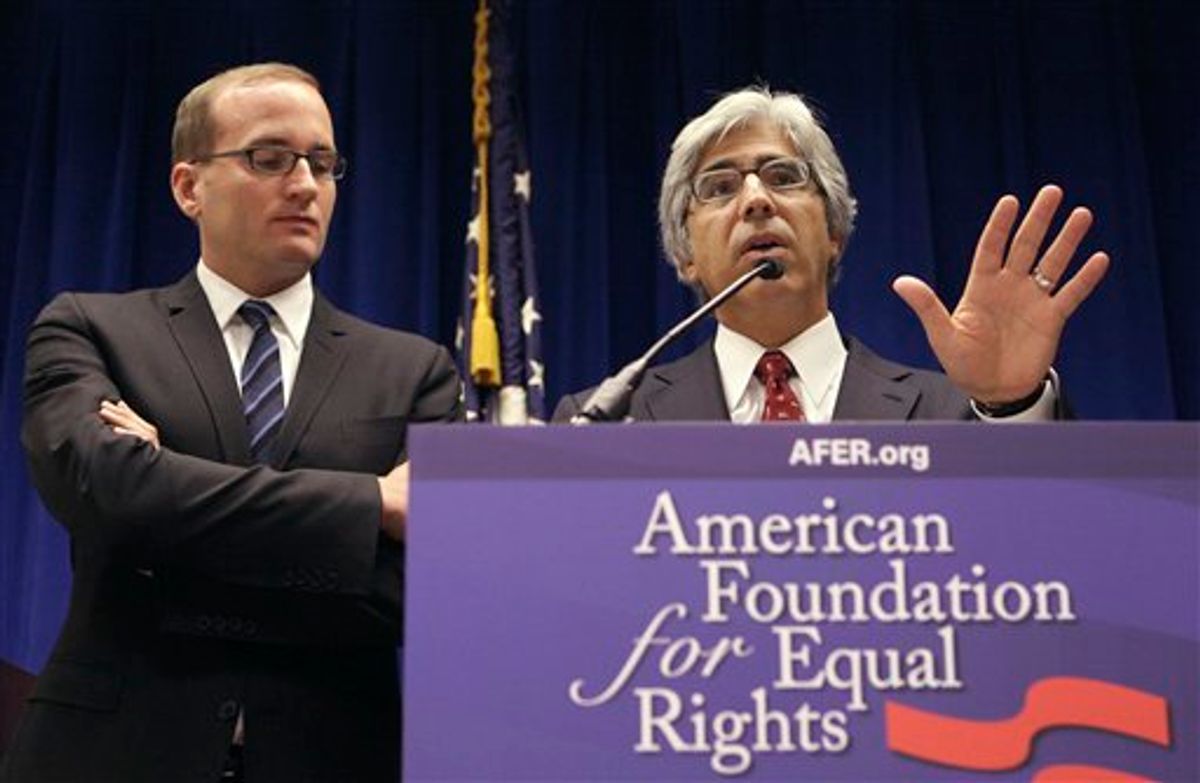 Attorney Theodore Boutrous, right, speaks next to Chad Griffin, Board President of the American Foundation for Equal Rights, during a news conference at the Phillip Burton Federal Building in San Francisco, Monday, June 13, 2011. A retired federal judge's long-term relationship with another man was the subject of an unusual and possibly unprecedented court hearing that began Monday involving California's same-sex marriage ban. Lawyers for the sponsors of the voter-approved ban asked the chief federal judge in San Francisco to vacate a decision issued by his predecessor last year that declared the same sex marriage ban an unconstitutional violation of gay Californians' civil rights. (AP Photo/Jeff Chiu) (AP)
--

A federal judge is deciding whether a gay judge's ruling to strike down California's same-sex marriage ban should be overturned because he failed to divulge his own marital intentions before throwing out the voter-approved measure.

Chief U.S. District Judge James Ware said he would issue a decision within 24 hours after a hearing Monday in which lawyers trying to salvage the ban posed an unprecedented legal argument questioning Judge Vaughn Walker's impartiality when he issued last year's landmark ruling that Proposition 8 was unconstitutional.

The lawyers insisted that Walker, who was chief judge of the Northern District of California at the time, should have recused himself or disclosed his relationship because he and his partner stood to personally benefit from the verdict.

"It now appears that Judge Walker, at the time the complaint was filed and throughout this litigation, occupied precisely those same shoes as the plaintiffs," attorney Charles Cooper said.

Ware, who inherited the Proposition 8 case from the now-retired Walker, asked why Cooper assumed Walker had any intention of getting married, just because he was in a decade-old relationship.

"I'm asking you to tell me what fact you would have the court rely on to suggest that Judge Walker wanted to change, not maintain his relationship?" Ware asked.

Cooper conceded he did not know Walker's outlook on marriage. Still, he insisted the judge's failure to reveal the relationship until 10 months after his ruling made his silence suspect and his marriage plans an appropriate subject of inquiry.

During the lengthy back-and-forth that followed, Ware asked, "So if a reasonable person thought a black judge should recuse himself from a civil rights case, that would be enough?"

Cooper replied, "No, your honor."

Ware asked why not.

"A reasonable person would not consider that black judge, any more than a white judge, for that reason alone someone biased or impartial," the lawyer said.

"I agree with you," Ware said. "Our test of reasonableness in our country will not allow us to discriminate on the basis of race, gender or sexual orientation."

"Just because people are gay and lesbian and in a relationship doesn't mean they are all alike," Boutrous said. "He is just engaging in this stereotyping that everyone is the same. ... There is no evidence that Judge Walker intended to get married. None."

Boutrous also derided Cooper's assertion that it was Walker's relationship status and not his sexual orientation that called his impartiality into question.

"It's not some news flash that Judge Walker was in a same-sex relationship," Boutrous said. "They are targeting Judge Walker because he is gay."

Walker publicly revealed after he stepped down from the bench in February that he is in a 10-year relationship with a man. Rumors that he was gay had circulated before and after he presided over the trial in early 2010.

Turning his attention to Boutrous, Ware asked if objective observers would be wrong to assume a judge who is a member of a minority group whose issues are at stake in a trial could not be fair.

"If the court did accept that Judge Walker was intending to marry and therefore was on an even floor with the plaintiffs here, that would not lead a reasonable person to question his impartiality?" the judge asked.

Boutrous replied: "I do not think it would or should. I think it has to be more direct."

Ware pushed harder. "It sounds like the next statement you would make is there are no circumstances that would cause Judge Walker's impartiality to be questioned in this case," he said.

Ware revealed at the hearing's outset that he had presided at a same-sex marriage during the brief period in 2008 when the ceremonies were legal in the state.

He said the ruling by Walker, who did not attend Monday's hearing, raised important questions and called it the first case in which a judge's same-sex relationship had led to calls for disqualification.

"There was probably the same kind of struggle when race or gender were the issue," Ware said.

Many legal scholars do not expect Ware to overturn Walker's decision. They point out that having a judge's impartiality questioned because he is gay is new territory, but efforts to get women judges thrown off gender discrimination cases or Hispanic judges removed from immigration cases have failed.

Ware also heard arguments on whether he should prohibit Walker from using videotaped recordings of the trial in public speeches. Cooper said Walker's post-retirement use of the recordings violated a U.S. Supreme Court ruling barring the trial from being broadcast beyond the federal courthouse in San Francisco.

Ware said he would issue a written ruling at a later date but suggested he was disinclined to prevent his former colleague from making personal use of the videos.

Ware said Walker had been given the videos as a parting gift during a "passing the gavel" ceremony.

"It was done under my auspices," he said. So I want to disclose that in case you wish to make an argument that somehow having presided over that event ... I should recuse myself."