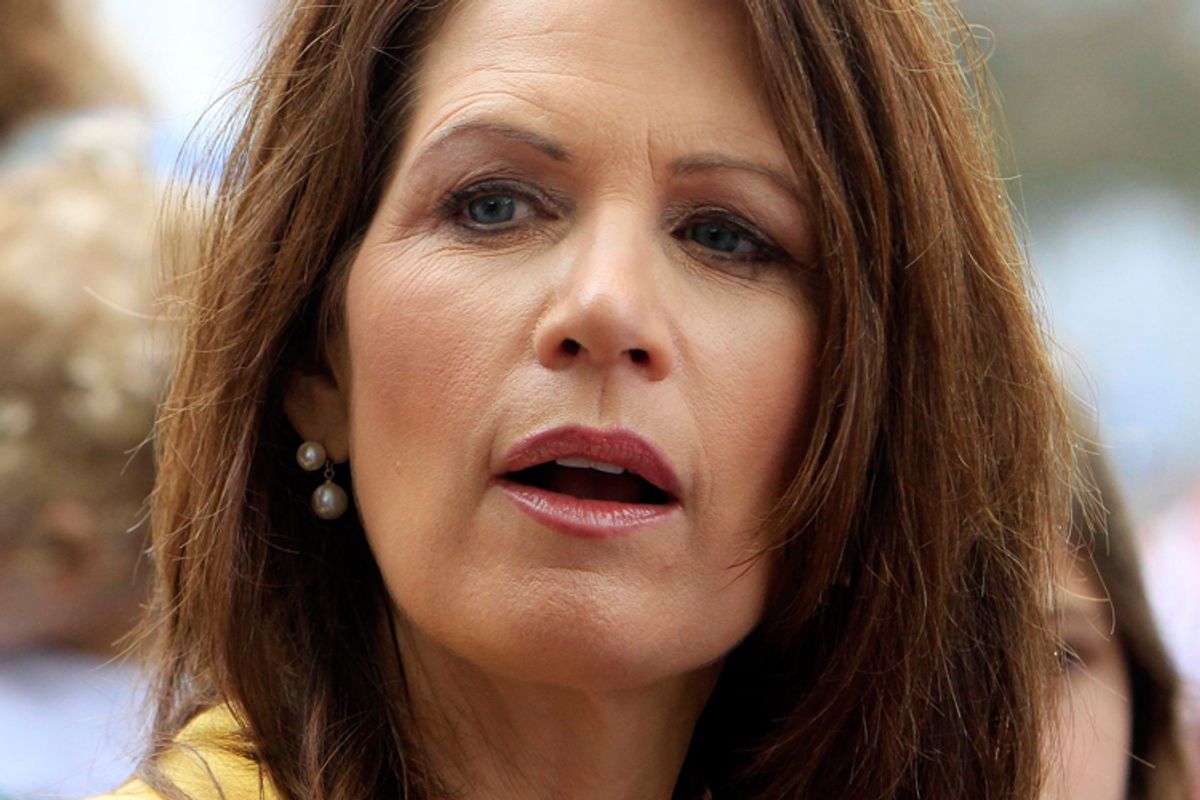 Michelle Goldberg's Daily Beast/Newsweek piece on Michele Bachmann's history and faith -- a strain of born-againism associated with crackpot history, opposition to science, and virulent intolerance of gays and lesbians -- shows precisely how out-there Bachmann is, even though the congresswoman these days pretends to be run-of-the-mill hard-right-winger. (Yes, her current extremism represents a moderation of her former incarnation.)

The piece begins with a wonderful recounting of the time she accused lesbians of kidnapping her and holding her hostage in a bathroom, because some ladies were talking to her. Minnesotans may know much of this already, but people familiar with Bachmann only from liberal blogs or cable news are missing the evangelical extremism that informs her every public statement. She talks like Ron Paul now, but she's Pat Robertson at heart. Her spiritual influences and advisors explicitly advocate theocracy and are obviously responsible for her garbled and twisted impression of American history.

A couple of newsy bits: Her 23 foster kids, a topic she mentions all the time? She doesn't ever go into detail about how many she has or had at any time, or for how long she fostered them:

Bachmann often says she has "raised" 23 foster children. That may be a bit of a stretch. According to the Minnesota Department of Human Services, Bachmann's license, which she had for 7 1/2 years, allowed her to care for up to three children at a time. According to Kris Harvieux, a former senior social worker in the foster-care system in Bachmann's county, some placements were almost certainly short term. "Some of them you have for a week. Some of them you have for three years, some you have for six months," says Harvieux, who also served as a foster parent herself. "She makes it sound like she got them at birth and raised them to adulthood, but that's not true."

(However many she has at a time, foster kids are a good way to make some tax-free cash from the Minnesota government, and they're not even Bachmann's sole source of free government cash.)

It's likely that her husband's clinic is at least in part dedicated to "curing" gay people:

Both she and her husband, by all accounts her most trusted political adviser, believe that homosexuality can be cured. Speaking to a Christian radio station about gay teenagers last year, Marcus, who treats gay people in his counseling practice, said, "Barbarians need to be educated. They need to be disciplined, and just because someone feels this or thinks this, doesn't mean that we're supposed to go down that road."

This is the beyond-the-pale stuff that makes Bachmann so, so much worse than Sarah Palin, to whom she is regularly compared.

Bachmann has also lied about her own family's support for her anti-gay activism. Members of her extended family have written letters to Minnesota papers criticizing her, without identifying themselves as being related to her.

She is, really, a pretty awful piece of work.