Sometimes he's the volatile genius of "Eternal Sunshine" and "The Cable Guy." Sometimes he talks through his butt 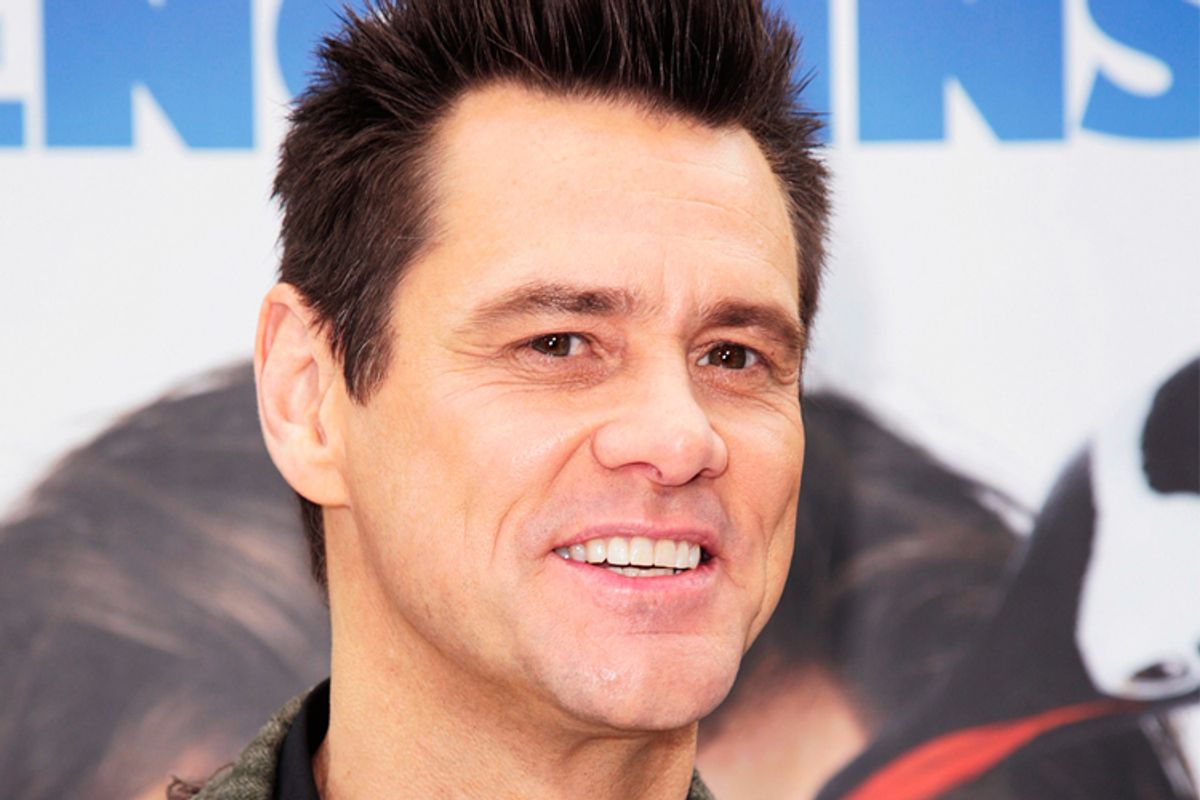 It's not as if Jim Carrey isn't funny in "Mr. Popper's Penguins," a new family flick from 20th Century Fox that has almost nothing to do with the venerable children's novel by Richard and Florence Atwater, beyond a character named Mr. Popper and some penguins. Carrey appears to have a pretty good time in this half-baked "Christmas Carol" knockoff, playing an odious Manhattan commercial real estate shark whose soul is redeemed, little by little, after his late father sends him a penguin in a box. (You have to be there, or on second thought, you don't.) He does a fine Jimmy Stewart impression, slo-mo replays of his own stunts, and a wide selection of big-eyed, lantern-jawed, Jim Carrey-style double takes. He grabs a freshly printed contract and takes a big snort: "I love the smell of fresh toner in the morning!"

I took my kids to see "Mr. Popper's Penguins" at a family screening last weekend, and here's the parental advisory: It's got adorable penguins and poop jokes and half a dozen decent sight gags and modestly agreeable performances from Carrey and (especially) Carla Gugino, who plays the semi-estranged Mrs. Popper. It's got some cute kids I couldn't really tell apart, and it's got the funny and attractive English actress Ophelia Lovibond, who A) has the best name in the history of show business, even when you include Imogen Poots; and B) nearly steals the movie as a pointless supporting character -- I should say, a pointless peripatetic personage -- who only utters words beginning with P. There's no story beyond the utterly formulaic and not the slightest semblance of realism, but your kids will enjoy it if they're young enough and pretty easy to please. (Mine are both.)

With that taken care of, the other question to emerge from this tepid all-ages flick, which will neither last long in theaters nor generate all that much cash, is what the heck became of Carrey's career as a comic genius? It's a question that answers itself, in a way. Ever since Carrey became a top-line movie star with the first "Ace Ventura" picture in 1994, he's made sporadic attempts to break out of the goofballing cut-up role by doing edgy adult comedy or semi-serious drama or whatever. I mean, they haven't all been good movies and his performances have been all over the map, but give the dude credit: "The Cable Guy," "The Truman Show," "Man on the Moon," "The Majestic," "Eternal Sunshine of the Spotless Mind" and "I Love You Phillip Morris." Carrey has played a stalker, a human lab rat (twice), a Hollywood screenwriter with amnesia, Andy Kaufman and a flamboyantly gay con man. You can't say he hasn't been tryin'.

Now, from my tweed-jacket-'n'-armchair position I would decree that that list contains one near-masterpiece, two outrageous and delightful cult classics, a couple of others that aren't bad and only one movie that's truly awful. But you know exactly what I'm going to say about what they all have in common: They didn't bring in the bacon, or at least not nearly the way you're supposed to when your name goes above the title. (In fairness, "The Truman Show" was a hit, with $230 million-plus in worldwide box office, and "Eternal Sunshine" probably turned a profit. But most of the other movies on that list involved weeping accountants, and people being led out of Los Angeles office buildings by security guards.)

You could say that the public prefers Carrey when he's talking out of his ass or doing random "Star Trek" voices, but it's probably fairer to say that the great clanking enterprise of Jim Carrey's movie-star career demands those things. Maybe the day will come when Carrey's willing to leave all that behind and strike out on his own, and we can see inklings of that. Nobody forced him to play the roguish, largely unsympathetic homo-antihero of "Phillip Morris," after all, and I don't believe Carrey is so stoned on the smack of Hollywood stardom that he thought that would be a big hit.

So you can look at this guy's career -- and, to be clear, I think he's one of the great physical comedians in American movie history, up there with Buster Keaton and Harold Lloyd and Jerry Lewis -- and say, oh, here he is, pushing 50 and entertaining kids with disposable mediocrities like "Horton Hears a Who!" and the 2009 "Christmas Carol" and "Mr. Popper's Penguins," and isn't it sad. I sure do wish those were better movies, and that's a puzzler. Carrey seems to lack any ability to tell good from bad when it comes to these big-budget family films, or not to care. (Comedians often like broad and sentimental shtick.) Or we could just say, meh, nobody died and we'll see what happens. Hey, look -- penguin poop!