"Spider-Man" opens at last - but is it too late to save? 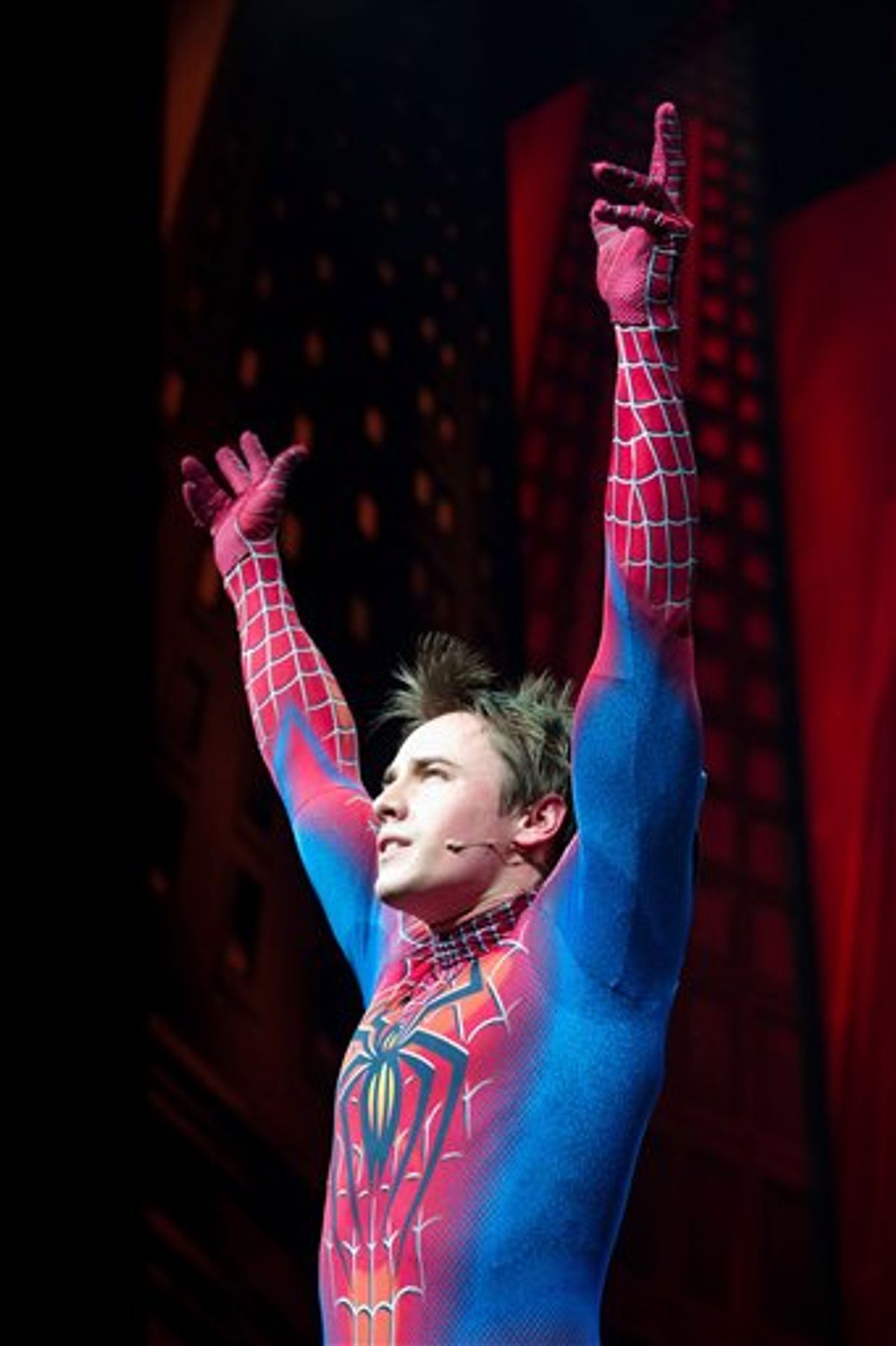 Like the Great Pyramid of Giza, the Cathedral of Chartres, or the Big Dig of Boston, they said it would never be ready. But on Tuesday night, after six delayed openings, 180-odd preview performance, several major creative team shakeups and rewrites, and a season more plagued by injuries and debacles than Brett Favre's, "Spider-Man: Turn Off the Dark" has opened on Broadway. But when the strange fascination of a show's cursed road to opening night far exceeds the buzz about the show itself, what happens when it settles into its run? What do you do when even the Muppets think you're a joke?

There was a time – now in the distant past – when a Broadway musical combining a beloved superhero, the Tony award-winning powerhouse Julie Taymor, the legendary Bono and the Edge, and a $65 million budget to throw around sounded like a great idea. There was also, believe it or not, a time when February 18, 2010 sounded like a realistic projected opening night. Now, as Bono quipped on Sunday's Tony Awards, "We used to be famous for being in U2."

The show's creative team have labored now for months with an unusual dilemma – how to fix the show when, as The New York Times wearily put it last winter, even the "sheer ineptitude" that's become its freakish main draw "loses its shock value early." Naysayers and critics be damned, the Spider-Man crew has opted for a direct PR attack on the fans. They've appealed to the ones who'd show up for anything U2 or comic book related anyway – and fortunately for Team Spidey, they are legion. Leading man Reeve Carney appeared with Bono and the Edge to do a number from the show on the "American Idol" finale in May in the bombastic,  aerial work showoffy number "Rise Above." Then, for the Tonys, they chose a restrained ballad and lots of Reeve Carney closeups, the better to emphasize the kind of swoony romantic stuff that made the movie franchise such a hit with the ladies.

So what do you get after three years of work and multiple retoolings? Incredibly unimpressed reviews. The New York Times has generously revised its opinion from back in February, declaring it an "ascent from jaw-dropping badness to mere mediocrity" while The Wall Street Journal called the book "flabby and witless," the music forgettable, and the cast "pretty, bland and devoid of charisma." And the Washington Post cheered, "On the plus side, however, the whole enterprise is now about 20 minutes shorter." Not exactly the kind of stuff that makes it to the marquee. The audience reaction, meanwhile, has been stunningly divided -- comments at the Times have tended to range from "laughably awful" to "just plain awful," but with a fair smattering of "fun" and "fantastic."

Sometimes, a seemingly doomed production turns into a runaway success anyway. James Cameron's "Titanic" was, before its release, one of the most notoriously problem plagued, budget-run-amok productions in Hollywood history. All was forgotten when the public got a load of its combination of dazzling effects and tragic love. Yet what kept "Titanic" afloat at the box office was the return viewers, especially chicks who couldn't get enough of Leonardo DiCaprio. With "Spider-Man" ticket prices starting at $67.50 and a weekly operating cost estimated at a million dollars, the question of whether or not it can survive economically is still very much up for grabs.

"Spider-Man's" Tuesday opening night featured Bill Clinton in the audience, Julie Taymor returning in momentary glory, and a standing ovation for a cast that has got to be seriously over it by now. Yet when I randomly checked this morning if there were still non-rush tickets available for tomorrow's show, I found them easily. Eight years after it opened, good luck getting in to "Wicked" tonight. Not a great omen, Spidey.

The Spider-Man musical undoubtedly represents the culmination of years of genuine hard work and dedication on the part of its cast and crew. But it also represents something that, every step of the way, has seemed formulaic and forced. That's the reason for all the schadenfreude. Bono can jest about the New York Post stories his show has helped create (and then go back to his mansion to bathe in gold bullions), and there will still be fans who will pay to see stunts and power ballads.

But there's surely a lesson for future Broadway moguls in the fact that the biggest hit of the season was a musical by a few other successful stars with an adoring built-in audience. Yet "Book of Mormon" rightfully has earned raves and massive box office not for its "South Park" cachet or even its scathing profanity, but its deeply sweet, funny heart. In among the Joseph Smith jokes, there's a musical that's actually about something, about friendship and loyalty and faith. What a concept! It may not be easy to make a man fly, but "Spider-Man" has at last proved it's possible. It's far harder to make a man seem real, to make an audience care about his struggles and triumphs. But when you can, that's when you've got a show that truly knows how to soar.