Is it time to stick a fork in Tim Pawlenty? 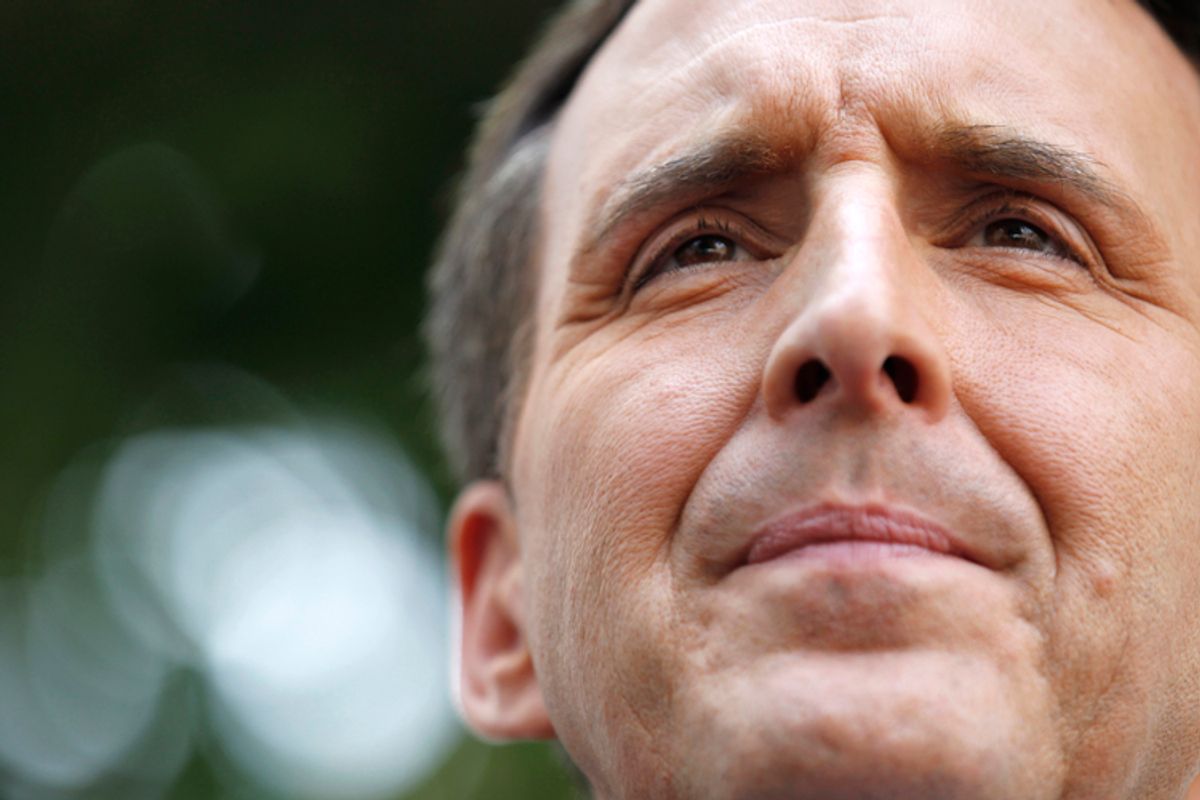 At the risk of being spectacularly and embarrassingly premature with this, I'm increasingly convinced that Tim Pawlenty just doesn't have what it takes to win the Republican presidential nomination.

This may not sound like a bold statement if you're looking at Pawlenty's current tepid poll numbers. But as I've been writing for months, the former Minnesota governor is one of the very few GOP aspirants who actually has the potential to emerge as the consensus choice of the party's elites -- the elected officials, fundraisers, activists, interest group leaders and opinion-shaping commentators whose views tend to trickle down to rank-and-file GOP voters.

Pawlenty has a substantial résumé (two terms as governor of a good-size, Democratic-leaning state), passes all of the key GOP litmus tests, and lacks the kind of polarizing personality and background that might scare general election-minded Republicans away. These attributes are in rare supply on the GOP side right now. Virtually every other candidate running -- Michele Bachmann, Newt Gingrich, Rick Santorum, Herman Cain, Gary Johnson, Ron Paul and (if she gets in) Sarah Palin -- does not have the same potential appeal to elites.

This is why Pawlenty has seemed like such a serious threat to win the nomination: His only real competition for elite support has been Mitt Romney, whose Mormonism, past social liberalism, and Massachusetts healthcare law all threaten to make him unacceptable to key GOP coalition groups. (Rick Perry, who is now threatening to jump in the race, also has the potential to win elite support.) Pawlenty has been in an enviable position for months: There's been a glaring opening for a broadly acceptable alternative to Romney, and the bar hasn't even been that high.

But while he's tried hard (painfully hard), Pawlenty has yet to demonstrate that he's capable of filling this void, even though he's had ample opportunity to do so. His feeble performance at Monday night's debate in New Hampshire -- in which he awkwardly dodged a challenge to say to Romney's face what he'd been saying behind his back -- has been widely ridiculed, and rightly so. And while it's fair to note that this was just one debate (and a very early one at that) and that even successful candidates have bad debates, it should also be said that it wasn't anything new. Pawlenty has been leaving one audience after another underwhelmed for a long time now -- even though he tells every audience exactly what it wants to hear. Remember the first Republican debate, in South Carolina last month, when Fox News' focus group went nuts for Cain -- and ignored Pawlenty? Or CPAC back in February, when Pawlenty's speech seemed to put the crowd to sleep (and when he ended up receiving just 4 percent in the straw poll)?

I'm not sure exactly why Pawlenty isn't generating any excitement -- or traction. The rap on him is that he's too plain, too boring and too generic. There's a lot to this. Even Romney, who is plain and boring and generic in his own way, generally manages to convey some vitality when he speaks. Just compare Pawlenty's answer to a question in Monday night's debate to Romney's; one is far more confident, far more polished and far more compelling than the other. Maybe Pawlenty's performance will improve, but it's getting very hard to imagine how.

One scenario would require the GOP to turn to him because it has no other options. It's certainly possible that this could happen, and -- as Jonathan Bernstein noted recently -- there is a modern precedent for a party doing something like this: In 1988, when Democrats nominated Michael Dukakis, a bloodless technocrat.

But Dukakis got very lucky -- first with the early 1987 implosion of Gary Hart (who had been the overwhelming front-runner), then with Mario Cuomo's decision not run, and then with the early fall meltdown of Joe Biden. (Biden was hit with plagiarism and résumé embellishment charges, thanks in part to a leak from Dukakis' right-hand man, John Sasso. At the time, he was threatening to emerge as the post-Hart/Cuomo front-runner, raising serious money, lining up labor support and winning rave reviews for his speeches.) That left Dukakis to face some very flawed competition: Paul Simon (whose appearance and presentation made him every bit as unlikely nominee as Dukakis); Dick Gephardt (then an obscure, severely underfunded member of the House of Representatives); and Al Gore (who entered the race late, after every other Southerner declined, and instantly marginalized himself by refusing to compete in Iowa and New Hampshire). When Gephardt edged out Simon in Iowa, Dukakis was basically set, since the outcome fatally wounded Simon and left Gephardt -- who lacked the money and infrastructure to parlay his Iowa breakthrough into major national effort -- as his main rival.

Romney may not be an overwhelming front-runner, but he is much better positioned in the current GOP race than Simon, Gephardt and Gore were on the Democratic side in '88. (Perry, if he enters, would potentially be stronger too.) In other words, what was good enough for Dukakis probably won't be good enough for Pawlenty. He'll need more.

There's also the example of Barack Obama, who (as Brendan Nyhan noted after Monday's debate) was himself derided for turning in flat, underwhelming debate performances in the early days of the 2008 campaign. It's a cautionary note worth keeping in mind, but it's also worth remembering that Obama had far more going for himself to start with than Pawlenty does. He entered the race as a genuine political celebrity, someone who had stirred the passions of millions of Democrats during his 2004 convention speech and someone whose biography was a source of inspiration for many more. Even before the debates began, Obama was raising massive amounts of money, faring strongly in national and early state polling (even if he was far behind Hillary Clinton in national trial heats), attracting significant media attention, and building a formidable campaign army. Pawlenty has none of this. All he has is the potential to put together a winning coalition, and so far he's done little with that potential.

The apt parallel, I'm more and more convinced, isn't to Obama or Dukakis -- it's to Phil Gramm (who sought the 1996 GOP nomination) and Bob Kerrey (a Democratic candidate in 1992). Both, like Pawlenty now, made perfect sense on paper, and each had a clear opening.

Kerrey was a senator and former governor from a red state (Nebraska) and a Vietnam hero, running in a party that, in the wake of the 1991 Gulf War, was eagerly seeking national security credibility. When literally ever big-name Democrat opted not to run, Kerrey seemed like the logical nominee. But as a candidate, he aimlessly lurched from theme to theme, often contradicted himself, and generally did nothing to inspire his part's confidence. He was quickly overtaken by Bill Clinton. And Paul Tsongas. And Jerry Brown. Kerrey's campaign went nowhere.

Gramm was a Texas senator whose ideological purity and in-your-face style seemed perfectly suited for a Republican Party that was gripped by anti-Clinton hysteria. Moreover, his chief foe was a quintessential establishment Republican, and an old, dull one at that -- Bob Dole. But Gramm was too in-your-face and too unlikable. He made some early waves with fundraising and a surprisingly strong showing in the Iowa straw poll (a tie with Dole), but fizzled in the fall and didn't even make it to the New Hampshire primary.

I won't say that Tim Pawlenty can't win the Republican nomination. Maybe he'll step up his game, or maybe he'll catch a break and Romney will suffer a Hart/Biden-like collapse. Anything is possible. But he'll need a lot of help, because there's really no reason to believe he's capable of helping himself.