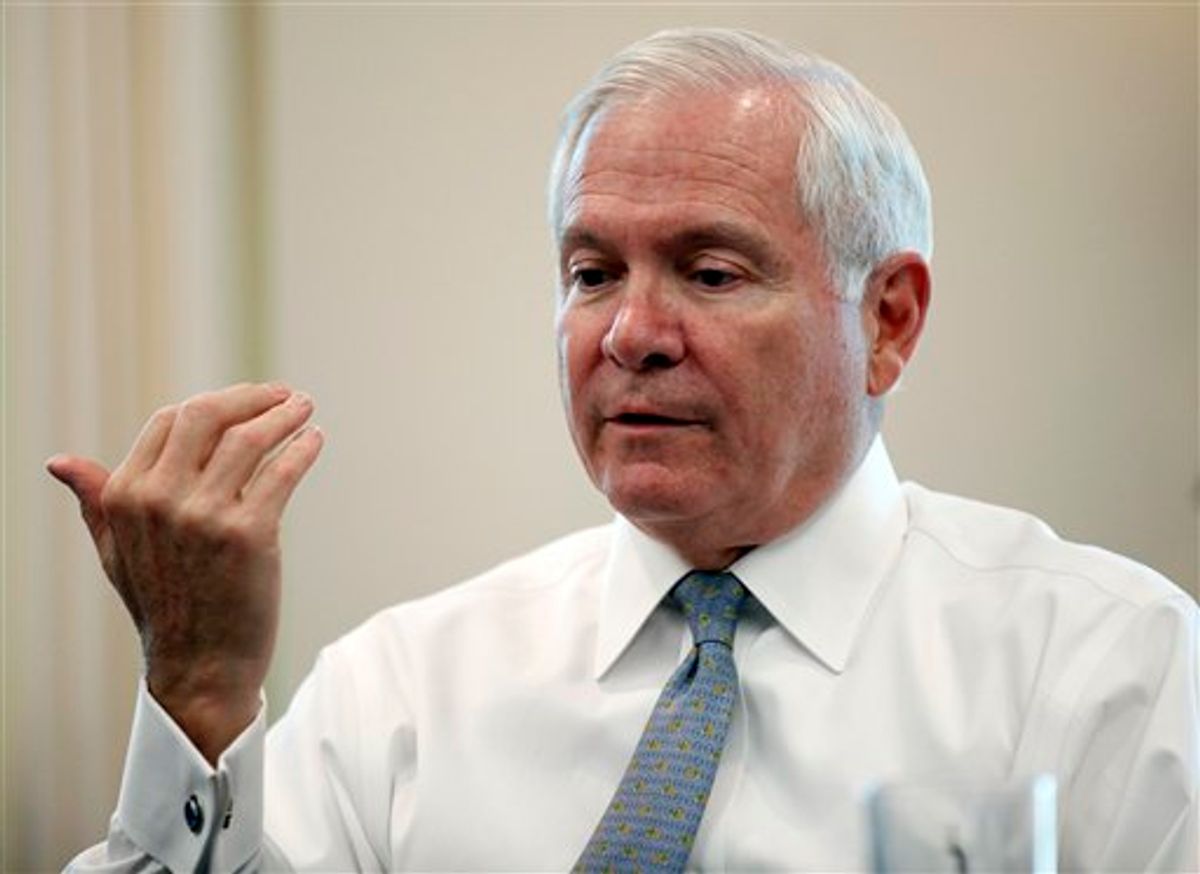 Secretary of Defense Robert Gates, speaks during an interview with The Associate Press in his office at the Pentagon Monday, June 13, 2011 in Washington.(AP Photo/Alex Brandon) (AP)
--

Robert Gates calls it "aging out." He's not referring to his imminent retirement as defense secretary. He's talking about a generational expiration date on the American embrace of Europe as a pillar of U.S. defense strategy.

Gates made a splash with a scathing speech last week in Brussels, home of the North Atlantic Treaty Organization, in which he said the 62-year-old alliance faces a "dim, if not dismal" future. He was not disowning NATO but warning that a years-long fraying of trans-Atlantic ties could eventually break the bond.

"I am worried," he said in an Associated Press interview in his Pentagon office on Monday.

Throughout the Cold War, beginning with NATO's founding in 1949 as a bulwark against the Soviet Union and its East European allies, a military and political partnership with Western Europe was fundamental to U.S. defense policy.

But in the 20 years since the demise of the Soviet Union the security landscape has been reshaped. And for a growing number of Americans, NATO is an obscure relic of a bygone era.

It's not just the reluctance of most European governments to shoulder a bigger share of the financial burden of providing their own defense that bothers Gates, although he said this is at the core of the problem. What has added to his worry is what Gates sees as an emerging new view among younger Americans of the proper priorities for American foreign and defense policy.

"People like me who have an emotional stake in Europe and NATO are aging out," he said in the interview. "For a lot of these younger people," including newer members of Congress bent on cutting government budget deficits and trimming U.S. commitments overseas, "they don't have these kinds of attachments."

Gates said he had no regrets about the blunt message he delivered in Brussels, which included an explicit warning that the European members of NATO face the very real possibility of "collective military irrelevance."

"I don't feel I went too far," he said. "I'll tell you one place I got pretty unanimous positive reaction, and that was in the United States of America -- across the entire political spectrum."

Sean Kay, a professor of politics and government at Ohio Wesleyan University and a specialist in European and international security, said in a telephone interview that the U.S. might get Europe to do more for its own defense if it began withdrawing troops and considered moving U.S. European Command headquarters to U.S. soil.

"A key premise of NATO's founding was that Europe needed the confidence to get on its feet" after the devastation of World War II -- "not that it should be a permanent appendage to American military power," Kay said.

Even though the threat of a land invasion of Europe is nearly nonexistent, the U.S. still keeps a small number of nuclear weapons in Europe. And the Obama administration is moving ahead with plans for a NATO-wide network of missile interceptors and radars designed to protect all European members from missile attacks by Iran.

Gates, who began a 27-year CIA career in 1966 and has worked for eight presidents, is a firm believer that the U.S. should not relinquish its predominant military role in the world. And he is adamant that maintaining that presence in foreign lands -- not just in Europe but also Asia -- is a crucial underpinning of that role.

"Make no mistake, the ultimate guarantee against the success of aggressors, dictators and terrorists in the 21st century, as in the 20th, is hard power -- the size, strength and global reach of the United States military," he said in a commencement address at the University of Notre Dame last month.

And that will not end when the wars in Iraq and Afghanistan are over, he added.

"Our military credibility, commitment and presence are required to sustain alliances, to protect trade routes and energy supplies, and to deter would-be adversaries from making the kind of miscalculations that so often lead to war," he said.

In the AP interview, Gates said he does not foresee a sudden rupture with Europe or NATO.

"I don't think it will be as dramatic as a break," he said. "But it'll just be slowly growing apart -- it's a troubled marriage."

Leon Panetta, the CIA director who is Gates' designated successor, agrees that NATO is not shouldering enough of the defense burden. But in written responses to questions from the Senate Armed Services Committee prior to his confirmation hearing, Panetta was far less explicit about his view of the alliance's future.

"It is my sense that a number of our NATO allies, while fulfilling their current commitments, have been underperforming in terms of their own investments in defense capabilities," especially in deployable combat forces, he wrote.

He added that the U.S. has "enormous stakes in a strong, mutually supportive NATO alliance."