Why do liberals hate freedom so much?

... and other mysteries from a Koch-funded study that ranks the 50 states according to how "free" they are 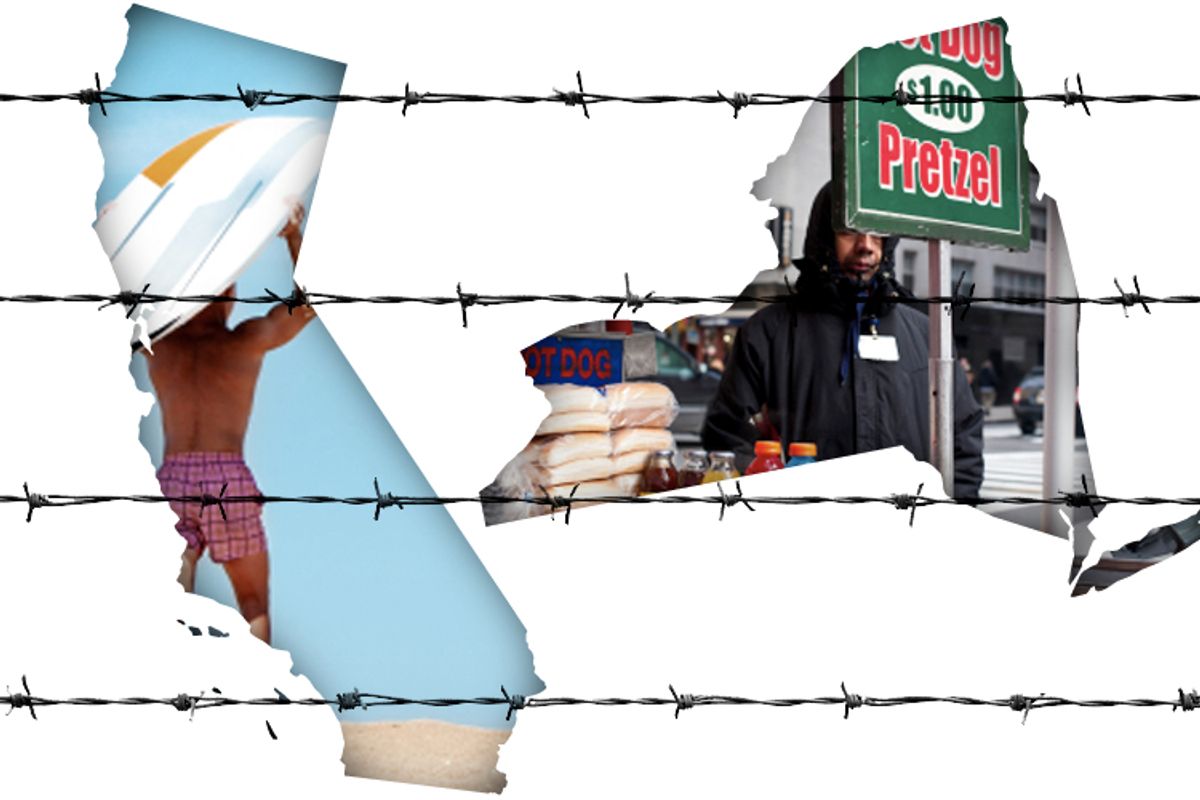 Why do liberals hate freedom?

On June 7, the Mercatus Center at George Mason University, a libertarian think tank founded and funded by the Koch brothers, released its latest snapshot of liberty in the U.S.A: "Freedom in the 50 States: An Index of Personal and Economic Freedom."

As is usually the case in studies of this sort, high-population blue states inevitably end up ranking last. The metrics used by the authors of the study penalize high taxes, regulations and, in general, just about anything that restricts the freedom of individuals and corporations to do as they please, from gun control laws and healthcare mandates to rules requiring seat belts and motorcycle helmets. Befitting libertarian sensibilities, the ideological biases in the Mercatus report do not purely jibe with conservative Republican priorities -- states get points for decriminalizing marijuana and allowing same sex marriage or civil unions, for example -- but nevertheless, the political gist is hard to ignore. Blue states cluster at the bottom, while red states are at the top.

But here's the brutal truth, apart from the politics: Most Americans are not free. A telling example: In the Mercatus rankings the two states blessed by the highest freedom quotient boast a combined population of a little over 2 million -- South Dakota and New Hampshire (the latter of which, admittedly, went for Obama in 2008). The bottom three states were New York, New Jersey and California, which have a combined population of over 65 million.

New York is the least free by a considerable margin. This will surprise few residents of the Empire state. In order from the bottom, New York is followed by New Jersey, California, Hawaii, Massachusetts, and Rhode Island. Unfortunately, these states make up a substantial portion of the total American population.

I feel the authors' pain. Once you have defined "freedom" according to a specific set of criteria it must be just a tad confounding to realize how many Americans live in a state of relative slavery. Note the snark: "Few residents of the Empire state" will be surprised at their lack of freedom. And yet: 19 million Americans still call themselves New Yorkers. Surely, this is a great bafflement.

Of course, we can also nitpick about what really constitutes true "freedom." For the authors, a mandate to buy healthcare insurance is a dastardly imposition on individual rights. (The authors are working within a construct defined by the political philosopher Norman Barry, "[A] belief in the efficiency and morality of unhampered markets, the system of private property, and individual rights and a deep distrust of taxation, egalitarianism, compulsory welfare, and the power of the state.")

But from my perspective, not having access to universal healthcare is an imposition on my freedom. The fact that for most Americans healthcare is tied to one's employer is a dread shackle limiting the freedom of movement of every worker. How much more liberated would we all be if we could switch jobs or work for ourselves without the fear that at any moment we might be crippled by an exorbitantly expensive health emergency? Similarly, a state requirement that employers offer paid parental leave (another black mark against California) clearly frees me to be a better father to my newborn. I'd really love to see what would happen to internal migration patterns in the United States if all the big blue states had universal single-payer healthcare, while everyone else was left at the mercy of a completely unregulated private market. That civil war would end rather quickly, I suspect.

To their credit, the authors point to an essay written by Nick Gillespie in 2005 that gives some insight into the mystery of self-hating liberals: "Live Free or Die of Boredom: Is 'economic freedom' just another word for nothing left to do?"

There's just not as much going on in South Dakota as there is in San Francisco, Herb Caen's infamous "Baghdad by the Bay." This fact is indisputable. I am personally intimately acquainted with the environs of southern New Hampshire, metropolitan New York and the San Francisco Bay Area -- and I love them all equally deeply -- but I can tell you without fear of contradiction that the food, entertainment and cultural options are far more numerous, diverse and, quite often, qualitatively superior in New York and California than they are in my favorite live-free-or-die state. Which is not at all to say that New Hampshire is lacking in charm or strong points. Bucolic splendor has its virtues; I enjoy listening to the loons cackle while canoeing about Nubanusit Lake as much as anyone. But I need more.

The millions who cluster on the coasts delight in their thriving arts communities and smorgasbord of dining options and the sheer intellectual stimulation that accrues from the helter-skelter activity of a big city. Many of us have agreed to an implicit trade-off: We'll put up with the impositions of big government because we are getting something essential out of the deal. Freedom is not a zero sum game. And you know, some of us might not even think that paying high taxes to support a robust safety net for those less fortunate is the worst thing that ever happened. We might even pride ourselves on it.

As best I understand it, the authors explain the persistence of these population clusters as holdover relics from the days when the surrounding regions enjoyed dynamic economic growth under less regulated regimes. So San Francisco, for example, exploded because of the benefits that accrued from its peerless logistics -- the Bay -- and its proximity to gold, timber and agricultural resources. But now that the state has imposed its overweening presence into everyone's private affairs, the citizens of California will supposedly flee to more welcoming climes. Idaho (the fourth freest state) or bust! And the culture will follow.

[A]s we noted during many of the talks we delivered after the first edition of the index appeared, we fully expect people in the freer states to develop and benefit from the kinds of institutions (such as symphonies and museums) and amenities (better restaurants and cultural attractions) seen in some of the older cities on the coasts (in less-free states such as California and New York) as they grow and prosper.

Perhaps so. Certainly, there has been a significant population shift from the Rust Belt and Northeast to the South and Southwest, which might lend support to that thesis. California's population did increase its population by 4 million from 2000-2010, but even that represented the slowest rate of growth in many decades. And to be fair, the restaurant options in the New Hampshire town I know the best, Peterborough, have undoubtedly improved over the last 20 years.

Then again, I would say the same is true for Berkeley, Calif. Time hasn't stopped here, either. So even while the heartland (that "bastion of freedom," according to the authors) catches up, the liberal coastal enclaves aren't standing still. The food was pretty damn good when I arrived in 1986 -- but it's even better now. The cultural opportunities are near infinite, and there's no real reason to expect that to change. There's a self-sustaining dynamism to large cities and population centers -- a greater range of employment opportunities and employment niches that feed upon and reinforce themselves. Berkeley, for example, positively seethes with psychotherapists, all of whom are presumably busily charging $150 an hour to talk patients through their paradoxical willingness to sacrifice their inalienable freedoms for the privilege of being able to buy locally sourced organic arugula at the farmers' market around the corner. (No one ever said it was easy to live under the shadow of totalitarian oppression, even if the coffee is better.) And you better believe those psychotherapists constitute a major source of arugula demand themselves. And so it goes.

How the rest of the 21st century plays out is anyone's guess. Maybe California's current fiscal troubles really do presage an uninterrupted fall from grace. Maybe the burgeoning South will establish a political hegemony that delivers the ultimate libertarian utopia of freedom-loving Tea Party dreams. Or maybe, just maybe, the citizens who swell the ranks of rising urban centers in Virginia and North Carolina and Texas -- diverse, dynamic, conceivably interested in better healthcare for themselves and their children -- will find themselves beginning to make the same trade-offs that New Yorkers and Californians once agreed to. The country seemed headed in one direction in 2008 and another in 2010 -- I certainly won't pretend to know where it's going next.

But one thing I do know: There are a lot of Californians and New Yorkers who don't think it's "unfortunate" to be at the bottom of the Mercatus Center list. On the contrary, we wouldn't have it any other way. And being Americans, I guess we're free to feel that way.