When a male politician acts like a rooster, we tend to hear about the moral superiority of women 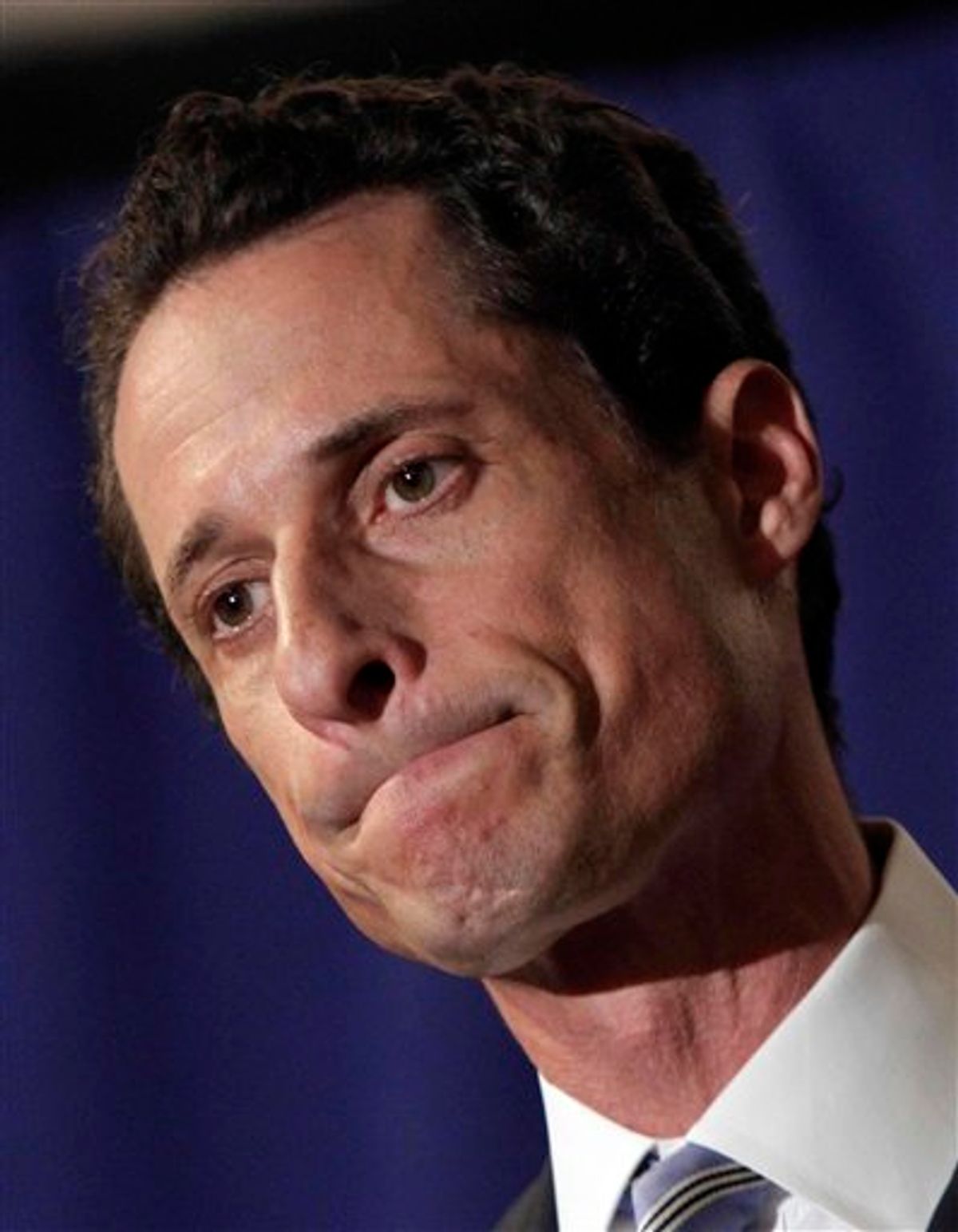 FILE - In this Monday, June 6, 2011 file photo U.S. Rep. Anthony Weiner, D-N.Y., addresses a news conference in New York, N.Y. Weiner's survival skills will be tested after the seven-term New York Democrat admitted to sending a lewd photo of himself to a woman via Twitter. Weiner, the most recent politician embroiled in a sex scandal, has said he isn't resigning despite acknowledging he sent sexually charged photos and messages to women. (AP Photo/Richard Drew, File) (AP)
--

The scarier things get, the more Americans turn to traditional diversions. Chaos looms in the Middle East. Syrian troops are machine gunning anti-government protesters from helicopter gunships. NATO has stepped up its bombardment of Libya. Civil war threatens in Yemen.

Closer to home, catastrophic tornado and flood damage has barely abated even as drought punishes Texas, wildfires consume Western forests, and what's predicted to be a dangerous hurricane season begins.

Thankfully, we have the masturbatory fantasies of Rep. Alexander Portnoy to divert us.

Narrated as a monologue delivered by a lust-ridden Jewish intellectual to his therapist, Roth's novel satirized the inward conflict between high-minded ambition and dirty little secrets. Or, to use the Freudian jargon of the period, between superego and id.

"Let's put the id back in Yid," Portnoy cried, igniting a feud between Roth's fans and critics who feared the book was, as the saying goes, "bad for the Jews."

Roth defined his character's problem in mock clinical terms as "a disorder in which strongly felt ethical and altruistic impulses are perpetually warring with extreme sexual longings, often of a perverse nature."

Just so Rep. Weiner -- a publicity hound so avid it was sometimes possible to see him holding forth on three cable news programs on one day. You'd change the channel, and OMG, Weiner again! Live by the tube, die by the tube, it's tempting to say.

Meanwhile, what's everybody else's excuse? So this poor dope gets off on talking dirty and sending naughty photos to women he's never met.

All of whom seemed to like it, incidentally. I learned all I needed to know about this aspect of female behavior in a Cincinnati hotel elevator some years back. Traveling with a big league baseball team, I evidently got mistaken for an aging relief pitcher by a woman eager to exhibit the team logo on her brassiere. She apologized after I explained I wasn't a ballplayer.

Another time, an attractive woman of my acquaintance confessed going wobbly in the knees around the then-mayor of Little Rock, whom nobody would mistake for Brad Pitt. Hence I'm neither shocked nor surprised that Weiner found willing playmates.

Believe it or not, there are even writer groupies. And no, I don't know what's wrong with them.

Every TV studio I've been in was rife with sexual intrigue.

Something else I know is that every time a male politician acts like a rooster there's a spate of commentary celebrating the moral superiority of women. The New York Times reacted to Weiner's humiliation with a classic of the genre, opining that "busy working women don't have time to cheat,” and quoting a feminist professor saying, “women run for office to do something, and men run for office to be somebody."

Look, ladies, it's a zero sum game. Takes two, you know. One of my favorite political quotes concerns the late Rep. Helen Chenoweth, once cited as "living proof you can actually [bleep] your brains out."

Joking aside, however, it amazed me that Weiner's humiliation became the sole focus of our increasingly voyeuristic news media for a couple of weeks. Except on CBS News with Scott Pelley, which properly treated his public confession as a one day, third-tier story.

From the first, there was clearly something badly wrong with the poor fool's judgment. No rationally consequent public figure could have imagined his clandestine activities would remain secret. He was clearly in the grips of compulsion, lying in pitiful attempt to save himself.

But a dangerous predator? It's false to say politicians can get away with things you can't, commented the New Yorker's Hendrik Hertzberg.

"It would be more accurate to say that they can't get away with things that regular people can. Look around you. Consider your friends, your work colleagues, your relatives, maybe even yourself. It's likely that a nontrivial proportion of them have some sexual secret (at least they think it's a secret) in their lives. If their secret comes out, if they get caught in an embarrassing lie about it, the whole world isn't going to hear about it. It won't be national news."

So yeah, Weiner's pathetic, ridiculous and a little bit sad.

I wonder who's next?