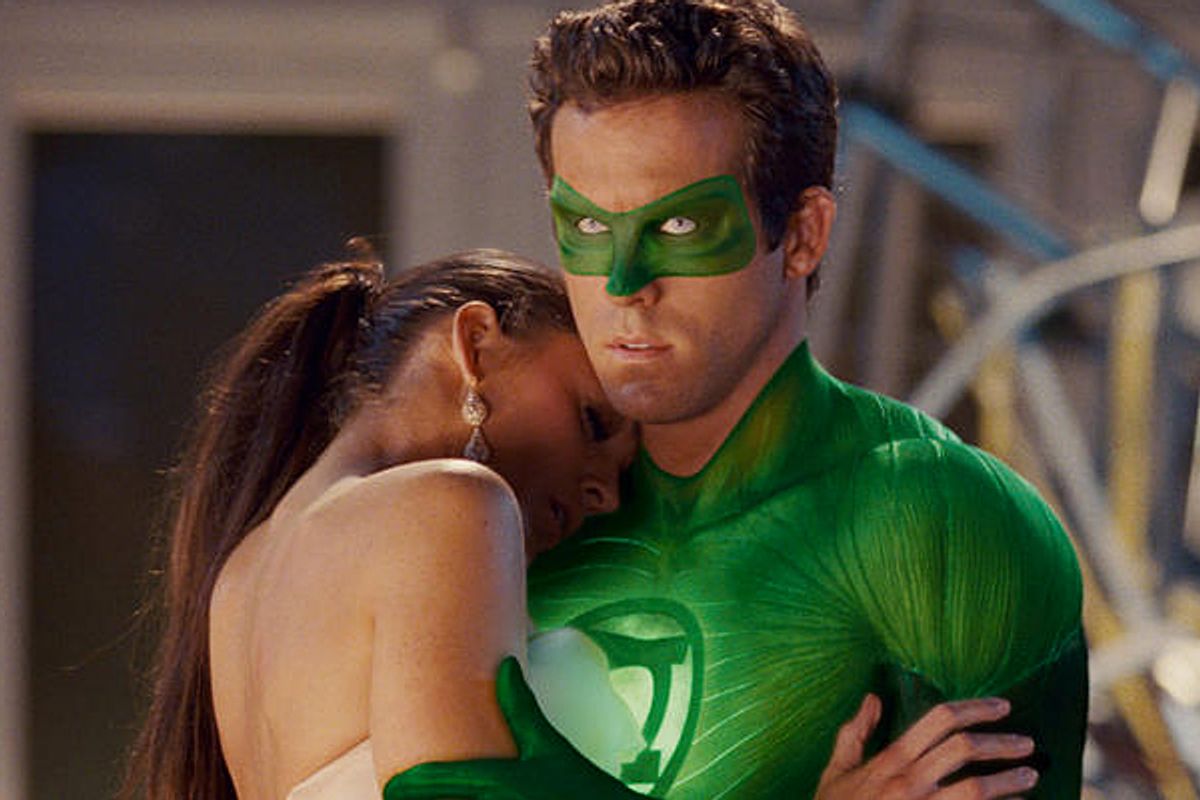 And so the summer of Anonymous Hunks and wall-to-wall superhero movies continues with Ryan Reynolds as the DC Comics legend "Green Lantern," which rates about a B-plus in both departments. As to Reynolds, who has become a sex god based, I guess, on his physique and his status as the soon-to-be-former Mr. Scarlett Johansson (since it's definitely not about his undistinguished acting career), well, I sort of get it, ladies (and interested gentlemen). He has a puppyish cheerfulness; you want to take him home and rumple his fur. Each of his abdominal muscles has its own pet name, and his torso, often seen here enshrouded with webby green latex, resembles a relief map of the Russian subcontinent, complete with steppes and taiga and ridgy, mountainous regions.

That said, movies like "Green Lantern" really aren't aimed at girls, and you have to see Reynolds' role as hotheaded flyboy Hal Jordan -- who, no, isn't the Green Lantern but the first human member of the intergalactic mind-over-matter strike force called the Green Lantern Corps -- as an aspirational model for tween and teenage boys. Which could be viewed as depressing since, for all his gym-hardened abs, Hal is a dim and unfocused character who always looks as if he just thought of something he's never thought of before, or else as if he's wondering at which girl's house he left the Camaro keys. I halfway wonder whether director Martin Campbell, an accomplished action-suspense stylist ("Casino Royale," "The Mask of Zorro," etc.), is using Reynolds' lack of reactivity on purpose, to recall the lummox leading men of old-fashioned space operas.

For all the CGI action sequences and butt-rocking Dolby sound effects, in fact, "Green Lantern" is most satisfying when it sticks close to stodgy comic-book archetype (or myth, for that matter): A callow hero, granted inordinate power; a beautiful girl who doesn't trust him; a mystical, universal order humans can barely comprehend; the unleashing of a great evil. This wouldn't necessarily have been a worse movie if it had been made in Italy in 1977, with a bunch of people in tights and sets made of aluminum foil. As things end up, though, Campbell's "Green Lantern" is much better entertainment than I was expecting. I enjoyed it more than "X-Men: First Class," which has superior acting and production values but also feels rambling and pretentious. "Green Lantern" is purely a popcorn movie for 12-year-olds, who won't be disappointed. (In fact, the PG-13 rating, while necessary for marketing reasons, feels forced; this movie doesn't need or want its occasional cuss words or vague sexual references.)

I'm not sure what purpose plot summary serves with a movie like this: You either know it better than I do or you don't care. Anyway, Hal is supposed to be a hot-stuff test pilot who's a complete screw-up in every other area of his life, including his botched romance with Carol Ferris (Blake Lively), who looks good in her own test-pilot gear and in corporate-exec drag and in a leather jacket, without ever resembling a human being. Lively and Reynolds are well matched -- they're beautiful (in a narrow and technical sense of the word) and you can project onto them whatever you want. It's startling, though, to realize there's more than a decade of age difference between them; Reynolds is 34 and Lively 23, and can you even imagine a movie in which those numbers would be reversed, unless that was the whole point? (Insert rant about the ingrained institutional sexism of Hollywood here.)

Shortly after Hal has some kind of flashback-freakout and crashes an expensive jet fighter in the desert, a ball of green lightning scoops him off the street and takes him off to meet Abin Sur (Temuera Morrison), a dying alien Lanternoid who has crash-landed on Earth and recruited Hal as his successor. (OK, yeah, it's the Power Ring, infused with the will of all the sentient beings in the universe, that does the choosing. Better?) Meanwhile, way out in deep space, the imperious leader of the Green Lantern Corps, purple-skinned Sinestro (Mark Strong), has a big problem to face. Some kind of ancient Sauron-Satan-Cthulhu entity called the Parallax, which looks like a giant Rastafarian hairdo surrounding a bulbous Dracula head, has escaped from its prison on the Lost Planet of Whatever and has embarked on a campaign to eat the universe.

I kid, but the Parallax is one of the best things about "Green Lantern," an amorphous, soul-sucking and profoundly evil CGI beast with more personality than either of the human leads. Also terrific is Peter Sarsgaard as a wormy, balding scientist named Hector Hammond, who's brought into a secret government facility to examine the corpse of Abin Sur, only to be infected by Parallax fear-juice or something and turned into a cackling mutant toady of doom. I've always enjoyed Sarsgaard's acting, while also feeling that at every moment he's asking himself, "Now, what would John Malkovich do here? I'm going to take that and dial it up a notch." Fortunately, that's exactly the right approach for this character.

So Hal's got to be tested by the Lantern Corps on their distant planet of rocky outcroppings and stony pillars, where a posse of Yoda-like overlords called the Guardians manage all of creation. He's got to fail and go back to Earth in disgrace and battle Hector and the Parallax and learn some life lessons and get the girl and set up a sequel, the end. (And please do not accuse me of "spoiling" anything with that sentence; what the Sam Hill did you think was going to happen?) Along the way, I think Campbell gets bored with the formula and sticks in some undertones that aren't exactly in the script, which is one of those Hollywood mash-ups that results in a screenwriting credit containing both ampersands and "ands." I mean, Sinestro looks like a combination of Hitler and Mephistopheles on purpose, and there's something more than a little Nurembergian about the whole business with the Guardians and the Lantern Corps and the power of the universal will, and you almost wonder whether the Parallax has a nihilistic, Lars von Trier point to make about destroying all this boringness and starting over. John Milton faced the same problem when he tackled this material too.