Looting, car-burning and other drunken antics hit the city after the Canucks were defeated in the Stanley Cup final 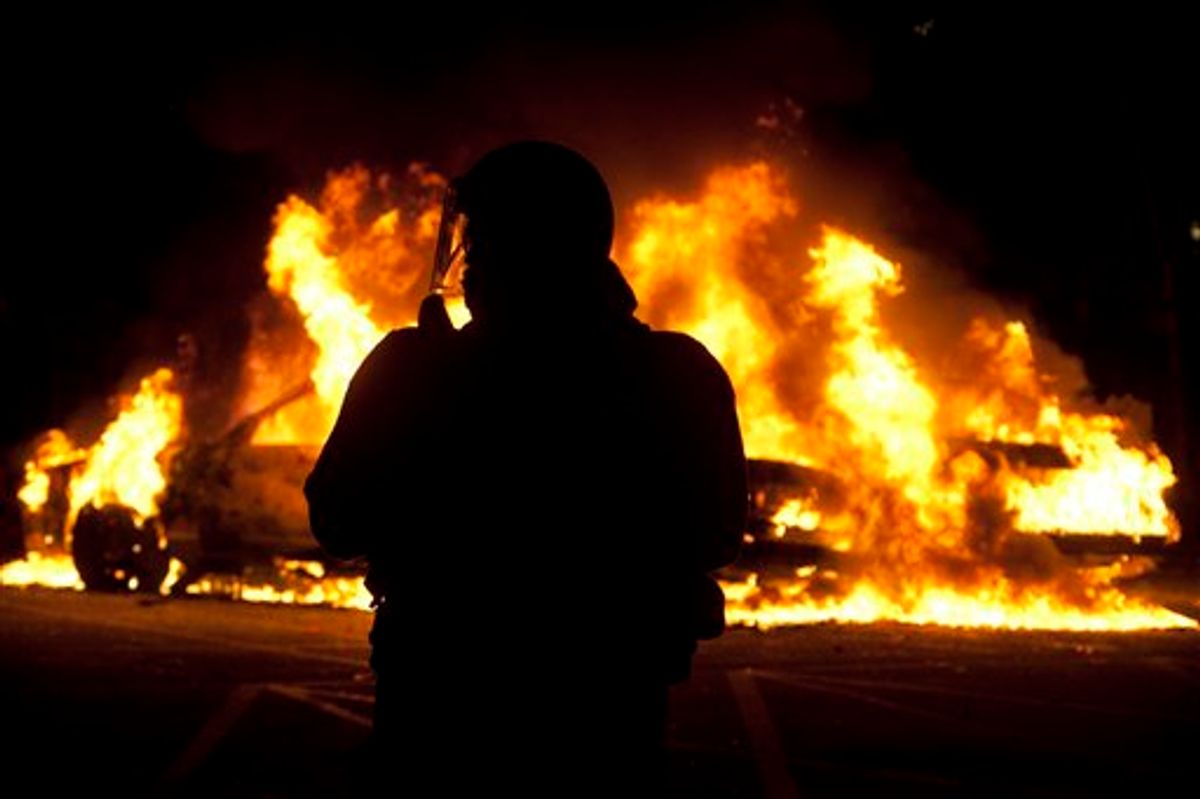 Almost 150 people required hospital treatment overnight as rioters swept through downtown Vancouver following a Canucks loss to the Boston Bruins in the decisive Game 7 of the Stanley Cup final.

Vancouver Coastal Health spokeswoman Anna Marie D'Angelo said Thursday three stabbing victims have been admitted and an unidentified man is in critical condition with head injuries after a fall.

She said most of the rioting victims were treated at St. Paul's Hospital in downtown Vancouver, while about 40, including the stabbing cases and the head injury patient, were being treated at Vancouver General Hospital.

Vancouver Mayor Gregor Robertson said "organized hoodlums bent on creating chaos incited the riot" and noted the city proved with the 2010 Winter Olympics that it could hold peaceful gatherings. A local business leader estimated more than 50 businesses have been damaged.

"They were here to make trouble and they succeeded," Robertson said.

"I would never have believed that Vancouver would be a city where there would be looting," Anton said. "I just feel such a profound sense of disappointment. We like to think we live in paradise here in Vancouver. It's hard to imagine here."

It was similar to the scene that erupted in the city in 1994 following the Canucks' Game 7 loss to the New York Rangers.

Anton said there was no loss of life or police brutality in this latest incident. She said dozens of volunteers patrolled the city's entertainment strip on Thursday, picking up debris and garbage.

One of the volunteers, Al Cyrenne, carried his broom downtown to clean up the damage.

"I'm all choked up," he said, as he surveyed broken windows and debris on a downtown street.

While police said it was mostly young thugs responsible for the mayhem overnight, an equally young crew turned up in jeans and rubber gloves, some with Canucks jerseys, all carrying plastic garbage bags.

Dozens of remorseful and dismayed commuters crowded around the smashed and plywood covered display windows at the flagship Bay store, a historical building that was the first focus of rampaging looters Wednesday night.

Someone had tacked a rough, hand-painted sign that read: "On behalf of my team and my city, I am sorry." People waited in line to sign it.

Across the street at London Drugs, the windows were also smashed.

Wynn Powell, the president and CEO of London Drugs, estimated the damage there at $1 million alone.

"The rioters attacked us for two hours before they got into the store. They were down attacking the stores of Vancouver to try to steal product."

TV footage showed a man being beaten after he tried to stop looters from smashing windows at the Bay department store.

Looters were seen grabbing T-shirts and anything else they could get their hands on. Young women were seen escaping with MAC cosmetics, with one carrying out part of a mannequin. The landmark building was filling with smoke as people, their faces covered in bandannas, continued the violence.

The looters turned their attention next on a Future Shop store a few blocks away, smashing windows and flooding up the stairs to the second-floor store, only to turn around quickly. One witness said police were at the top of the stairs.

Sears and Chapters stores were also looted, their glass fronts smashed. For many, the ugly chaos made the Cup loss an afterthought.

"What I've seen is a complete disgrace," said Beth Hope, 28, who is originally from England but has lived in Vancouver for two years. "I'm a Canucks fan, but my jersey's in my bag. I'm ashamed to be a fan right now."

Hope said she saw a parking structure on fire and cars ablaze.

"It's insane, it's absolutely insane," she said. "What's the point? Our team lost. Why destroy your own city? I'm afraid."

NBA star Steve Nash, from nearby Victoria and the brother-in-law of Canucks forward Manny Malhotra, sent a Twitter message imploring the fans to stop the violence. "We're a great city and have a lot of class. Our team is great and our championship will come. Soon," Nash wrote.

Some seemed to revel in the rampage, recording the vandalism on cell phones and video cameras. A few congratulated those who tried to attack police, and others erupted with cheers every time something was damaged.