Julian Assange markets himself on eBay

How much would you pay for lunch with the WikiLeaks founder and alleged rapist? 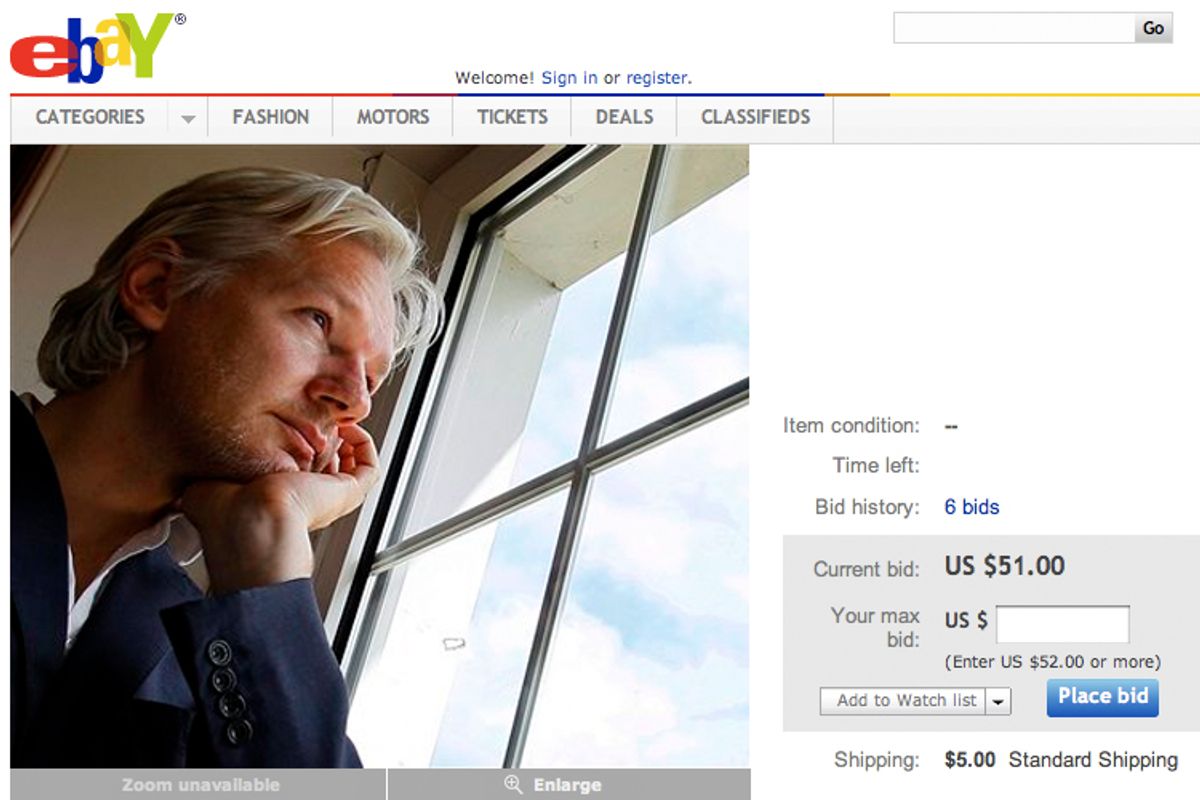 Julian Assange for sale on Ebay.
--

Don't call it a bailout: Julian Assange is now selling himself on the auction site eBay, but not in order to raise money for his upcoming court case dealing with Swedish rape charges.

No, the Australian founder of WikiLeaks is going to give a portion of his lunch time to the highest bidder, who has the luxury of spending around $3,000 (so far) for the honor of eating in one of London's fanciest restaurants with Assange, Slovenian philosopher Slavoj Zizek, and eight other people before watching the two "formidable forces" discuss Assange's site. The money will all be going toward WikiLeaks.

On the description of the item, it says:

100% of the final sale price will support WikiLeaks.

This is your chance at being one of eight people to dine with WikiLeaks editor-in-chief Julian Assange and renowned Slovenian philosopher, Slavoj Zizek.

The lunch will be from 12 - 3pm on Saturday 2nd July at one of London's finest restaurants. The meal will be followed by a Frontline Club event (http://www.frontlineclub.com/events/2011/07/announcing-frontline-club-exclusive-julian-assange-in-conversation-with-slavoj-zizek.html) from 4pm - 6pm at The Troxy in East London where these two formidable forces will be discussing the impact of WikiLeaks on the world and what it means for the future.

It was later added:

What you get with your winning bid:

The cost of the lunch

Taxis from the lunch to the event

And a front row seat at the event at the Troxy

We will be in touch with the winning bidders in due course.

For security reasons the organisers request that the winning bidder furnish them with a copy of their ID on winning the auction. You will need to present identification at the event and go through security checks.

So far the current highest bid is 1,900 euros with three days left in the bidding. This auction seems to be a sneaky way for WikiLeaks to work around PayPal's suspension of its site, as the winner can still pay for the eBay item with the service.

Julian Assange Television The Princess And The Frog Wikileaks