The star of Target's notorious propaganda film tells Salon: It was "very awkward" 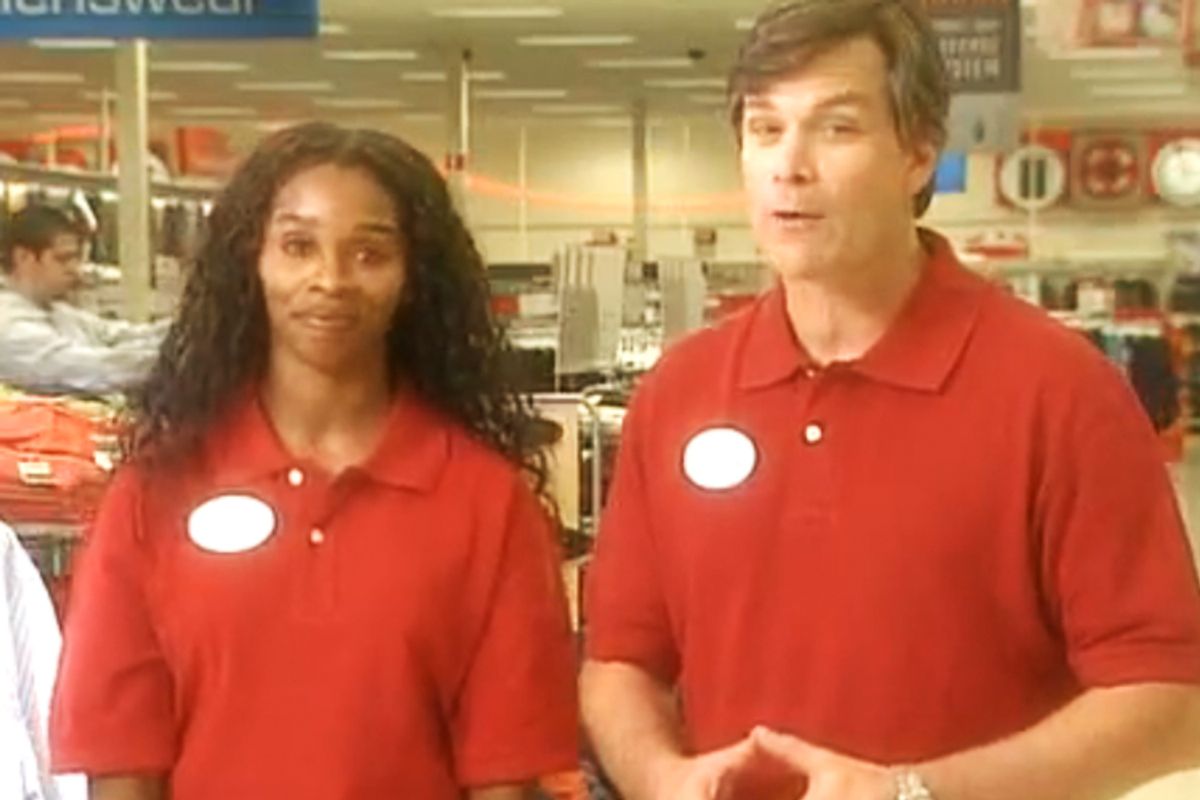 Oh, the irony! Target Corp., long locked in a battle with labor organizers, filmed a notorious internal anti-union video with union actors and under the jurisdiction of one of the biggest unions in the entertainment business.

The 13-minute film, posted by Gawker this week, was designed to dissuade workers from signing up to be represented by unions. A pair of smiling spokespeople dressed like Target employees -- "Maria" and "Doug" -- warn workers that, despite what they may have heard, a union is a "business," one that is greedy for dues and will not be able to deliver on promises of higher wages. As it turns out, the video was filmed under the jurisdiction of the American Federation of Television and Radio Artists (AFTRA), according to actor (and union member) Ric Reitz, who plays Target spokesman "Doug" in the film.

"If someone hires me to play a rapist, does it make me a rapist? You take the job, and you're an actor," says Reitz, a longtime member of AFTRA and the Screen Actors Guild. "Am I pro-union? Absolutely."

Reitz, 55, has had a long career in movies, television and commercials; he plays the U.S. president in the new film "The Green Lantern."

Reitz says when he got the script for the 2003 Target video, the anti-union content struck him as "very awkward." So he asked AFTRA if there was any issue. The union told him that as long as the information in the video was not "purposefully inaccurate" and Reitz was not personally taking a position, taking the job was fine, he says.

Co-starring as "Maria" in the video is Nicky Buggs, another union actor who has appeared in dozens of movies, television shows and commercials. Buggs has done voice-over work for Macy's and appeared in TV shows including "One Tree Hill." She could not be reached for comment.

AFTRA spokesman Christopher de Haan did not have immediate comment on what role the union played in the video's production, but he sent over this statement invoking the First Amendment:

AFTRA members are a union of talented performers, recording artists and broadcast professionals whose main objective is organize union-covered work and benefits across the spectrum of entertainment and news media industries. AFTRA membership rules require members to work under an AFTRA contract when performing in industrial training videos. AFTRA does not censor members or ban them from performing work based on its content. AFTRA fully supports the First Amendment right to free speech of all Americans. As the union that represents the people who entertain and inform America, we do not support or engage in the censorship of free speech.

Target spokeswoman Molly Snyder said in an email that the video was created in 2003 but declined to comment on why Target decided to used union actors for the film. Union actors are generally considered to be more professional than non-union actors; depending on the union, they get paid a minimum rate and have access to a variety of other benefits.

It's not clear whether the 2003 video featuring Reitz and Buggs is still in use. Bloomberg reported in 2009 that Target had updated its anti-union training video when Congress was still considering a bill to make unionizing easier.

Like Walmart, Target has fought for years to keep unions away from its stores. A few hundred workers at the Target in Valley Stream, N.Y., are set to decide on Friday on whether to join a union -- a vote that is being closely watched by the industry. The company has refused to rule out the possibility of shuttering the store if the workers join a union.