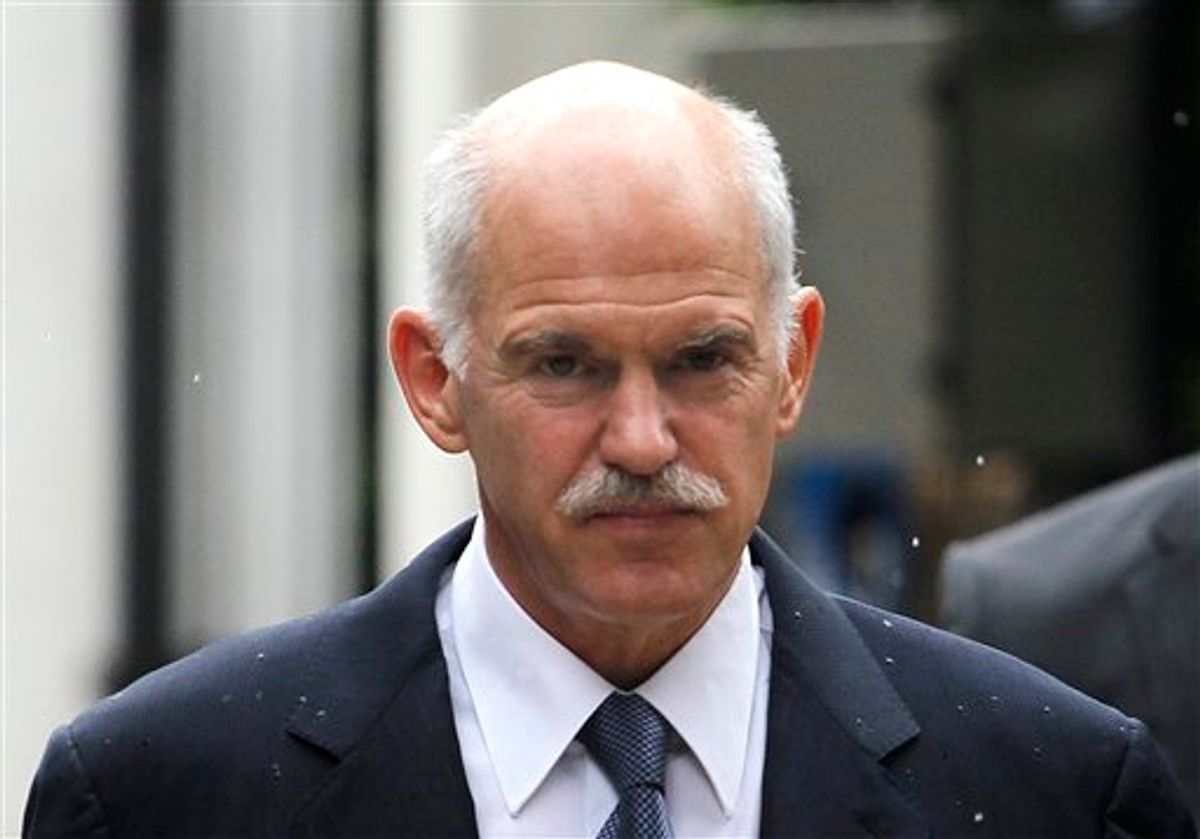 Greek Prime Minister George Papandreou, arrives the Presidential Palace before his meeting with the Greek President Karolos Papoulias, in central Athens, on Wednesday, June 15, 2011.Papandreou and conservative party leader Antonis Samaras discussed the creation of a power-sharing government to deal with the country's crippling debt crisis during a telephone conversation, an opposition party official told The Associated Press. The official spoke on condition of anonymity because the negotiations were still ongoing. The official said the conservatives' conditions for participating in a potential grand coalition were that Papandreou leaves his current position as prime minister, and the new government re-negotiate the bailout agreement. (AP Photo/Petros Giannakouris) (AP)
--

The critical position which has been held by George Papaconstantinou since the debt crisis began in late 2009, will now be taken over by Evangelos Venizelos, a Socialist heavyweight who challenged Papandreou for the party leadership four years ago.

Venizelos, a 57-year-old constitutional law professor and party stalwart, is considered Papandreou's main internal Socialist rival. A veteran of several ministries, he handled the run-up to Greece's hosting of the Olympic Games in 2004 as culture minister, and has also held the justice, development and transport portfolios in the past.

Government portfolios were also redistributed to address demands for faster reform from Greece's debt monitors at the European Union and International Monetary Fund. A new ministry for administrative reform was created to help scale back the country's bloated public sector.

Other party heavyweights were also promoted at the expense of Papandreou loyalists.

The reshuffle is Papandreou's latest attempt to deal with a severe political crisis that threatened to derail the debt-ridden country's efforts to pull itself out of its financial morass. Fears that Greece would default on its debts soon spooked investors all round the world over the past couple of days, sending share prices and the euro sharply lower.

A default by Greece could spark further panic on financial markets, pummel banks in Greece and across Europe and have a knock-on effect on other struggling European economies such as Portugal, Spain and Ireland.

So far initial reaction to the reshuffle appears to be positive, with the difference in interest rates on Greek 10-year bonds and the benchmark German equivalents narrowing from the record 16 percentage points overnight to the still exceptionally high 15.4 percentage points. The euro meanwhile has held steady at around $1.4150 since the reshuffle was announced.

Papaconstantinou, the 50-year-old former finance minister, had handled negotiations with the European Union and the International Monetary Fund last year to get the country a euro110 billion ($155 billion) bailout, imposing harsh budget cuts and tax hikes in return, and has been in crucial talks over more financial help for Greece.

Generally well-respected among his European peers, he has faced criticism from large sections of the public in Greece -- as well as from other ministers -- over the stringent austerity measures, and the fact that Greece has missed many of its fiscal targets that are essential for it to continue receiving funding from the bailout loans.

Greece has promised to slash its bloated public service by 150,000 people by 2015 and effectively end government jobs for life.

Papandreou has struggled to garner support for a crucial new package of euro28 billion ($39.5 billion) in spending cuts and tax hikes demanded by the EU and IMF. The package must be voted through parliament if the country is to continue receiving funds from its bailout.

Despite the insistence of both Papaconstantinou and Papandreou that the country had no other option and that it would default on its debts without reforming the economy, the anger has led to riots on the streets and a party revolt within the prime minister's governing Socialists.

Papandreou tried to face down the rebellion by negotiating with the rival conservatives to form a coalition government earlier this week, but the talks quickly collapsed. The crisis deepened Thursday morning, when two of his Socialist party lawmakers quit their seats in Parliament. Although the resignations did not affect Papandreou's five-seat majority in the 300-member legislature, they were a severe blow.

The reshuffle was his next step. He is to seek a Parliamentary vote of confidence in the new government, probably early next week.