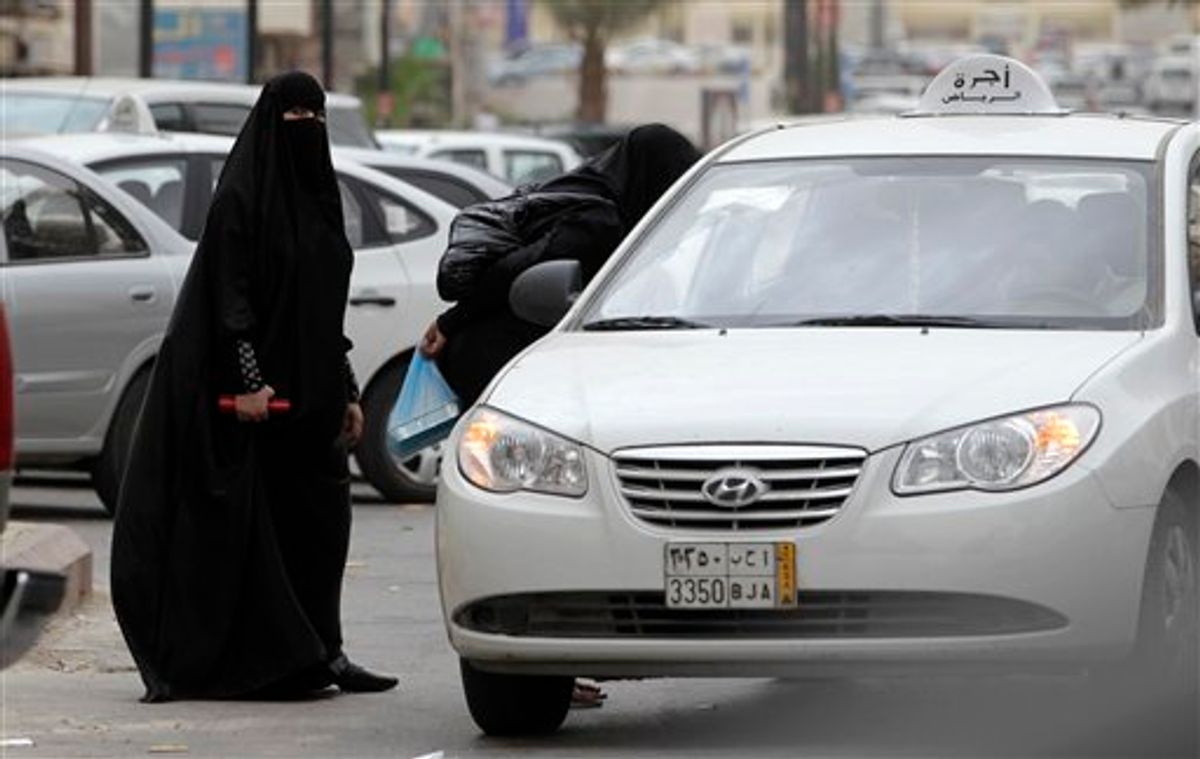 Saudi women board a taxi in Riyadh, Saudi Arabia, Tuesday, May 24, 2011. A Saudi woman was arrested for a second time for driving her car in what women's activists said Monday was a move by the rulers of the ultraconservative kingdom to suppress an Internet campaign encouraging women to defy a ban on female driving. Manal al-Sherif and a group of other women started a Facebook page called "Teach me how to drive so I can protect myself," urging authorities to lift the ban and posted a video clip last week of al-Sherif behind the wheel in the eastern city of Khobar. The page was removed after more than 12,000 people indicated their support for its call for women drivers to take to the streets in a mass drive on June 17. (AP Photo/Hassan Ammar) (AP)
--

A campaign to defy Saudi Arabia's ban on women driving opened Friday with female motorists getting behind the wheel -- including one who took a 45-minute tour through the nation's capital -- amid calls for sustained challenges to the restrictions in the ultraconservative kingdom.

Activists have not appealed for mass protests in any specific sites in Saudi Arabia, but are urging Saudi women to begin a growing mutiny against the male-only driving rules supported by clerics backing austere interpretations of Islam and enforced by powerful morality squads.

Calls for an ongoing road rebellion -- inspired in part by the uprisings around the Arab world -- could push Western-backed Saudi authorities into difficult choices: either launching a crackdown and facing international pressure or giving way to the demands and angering traditional-minded clerics and other groups opposing reforms.

It also could encourage other reform bids by Saudi women, who have not been allowed to vote and must obtain permission from a male guardian to travel or take a job.

"We want women from today to begin exercising their rights," said Wajeha al-Huwaidar, a Saudi women's rights activist who posted Internet clips of herself driving in 2008. "Today on the roads is just the opening in a long campaign. We will not go back."

The plan, she said, is for women who have obtained driving licenses abroad to begin doing their daily errands and commuting on their own.

"We'll keep it up until we get a royal decree removing the ban," she told The Associated Press.

A protest organizer, Benjamin Joffe-Walt, said there are confirmed reports of at least several woman in the driver's seat in the capital Riyadh.

Maha Al Qahtani, a computer specialist at Saudi's Ministry of Education, said she drove for 45 minutes around Riyadh with her husband in the passenger seat. "I wanted to make a point," she said in a telephone interview. "I took it directly to the streets of the capital."

Web message boards set up on Twitter and other social media carried unconfirmed reports that some women also got behind the wheel in the eastern city of Dammam and elsewhere. Joffe-Walt said some Saudi men claimed they drove around dressed in the black coverings for women in an attempt to confuse security forces.

There were no immediate reports of arrests or violence.

Encouragement also poured in. "Take the wheel. Foot on the gas," said one Twitter message on the main site women2Drive. Another urged: "Saudi women, start your engines!"

A YouTube page urges supporters around the world to honk their car horns for the Saudi women.

The campaign's official start follows the 10-day detention last month of a 32-year-old woman, Manal al-Sherif, after she posted video of herself driving. She was released after reportedly signing a pledge that she would not drive again or speak publicly.

Her case, however, sparked an outcry from international rights groups and brought direct appeals to Saudi's rulers to lift the driving ban on women -- the only such countrywide rule in the world.

There is no written Saudi law barring women from driving -- only fatwas, or religious edicts, by senior clerics following a strict brand of Islam known as Wahhabism.

They claim the driving ban protects against the spread of vice and temptation because women drivers would be free to leave home alone and interact with male strangers. The prohibition forces families to hire live-in drivers or rely on male relatives to drive.

Saudi King Abdullah has promised some social reforms, but he depends on the clerics to support his ruling family and is unlikely to take steps that would bring backlash from the religious establishment.

"Not allowing women behind the wheel in Saudi Arabia is an immense barrier to their freedom of movement, and severely limits their ability to carry out everyday activities as they see fit, such as going to work or the supermarket, or picking up their children from school," said Philip Luther, Amnesty's deputy director for the Middle East and North Africa.

Earlier this week, a group of women drove around the Saudi Embassy in Washington to protest the kingdom's ban on female drivers. Similar convoys converged on Saudi diplomatic missions in other cities around the world.

In November 1990, when U.S. troops were deployed to Saudi Arabia before the invasion to oust Iraqi troops from Kuwait, about 50 women got behind the wheel and drove family cars in one of the first acts of defiance against the ban. They were jailed for one day, their were passports confiscated and they lost their jobs.