In ominous tones, Islamophobes toss around terms like "taqiyya" and "Shariah." Do they even know what they mean? 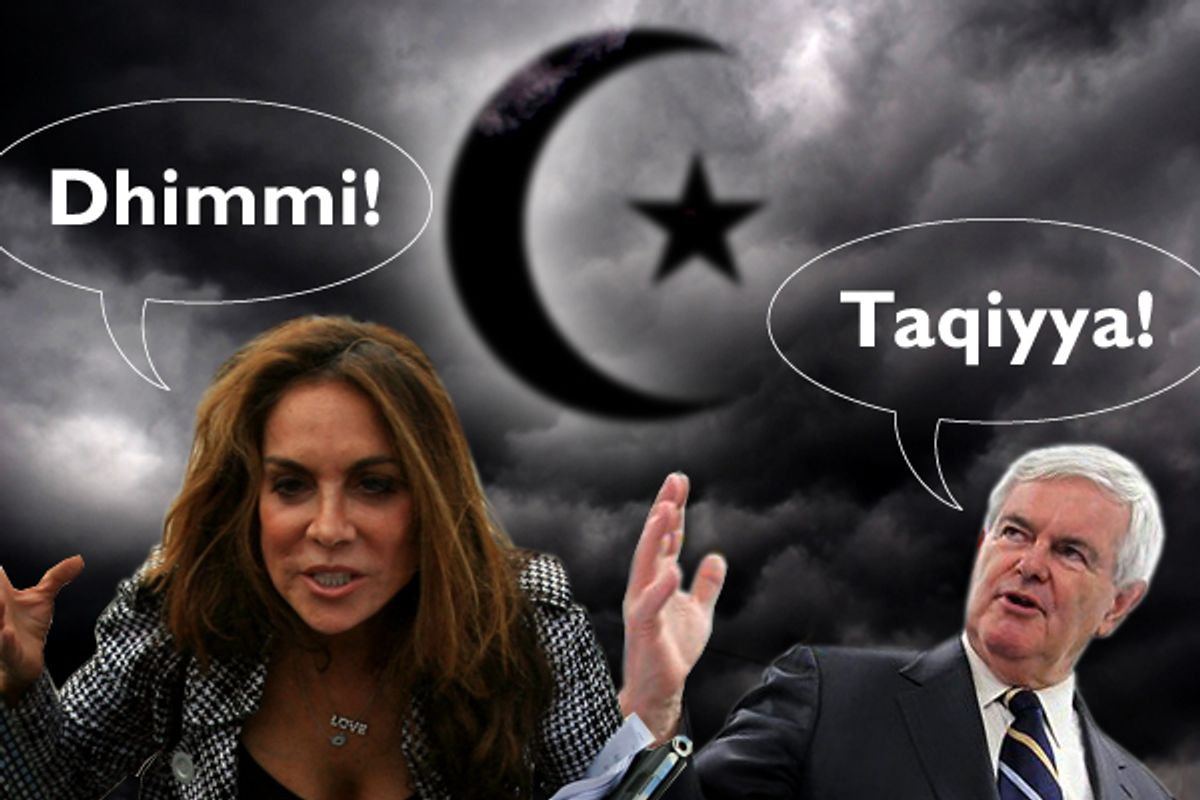 In a now infamous column, the writer Eliana Benador argued this week that Anthony Weiner (who is a Jew) may have converted to Islam but was hiding it from the world in accordance with the practice of "taqiyya."

"It is also important, when looking at this situation, to remember that observant Muslims practice taqiyya, an element of sharia that states there is a legal right and duty to distort the truth to promote the cause of Islam," Benador wrote.

In invoking the Arabic term "taqiyya," Benador exemplified a practice we've noticed in the past few years. It's become common for right-wing writers and even politicians to matter-of-factly toss around Arabic terminology when warning of the Muslim threat to America. These references, often made in ominous tones, are almost always without context.

So we thought it would be useful to hear explanations of terms like "taqiyya" from an expert. John Esposito, university professor at Georgetown and author of "What Everyone Needs to Know about Islam," was kind enough to explain six of the more common Islamic terms we've been hearing. Esposito wrote the "What it actually means" items below, following my introductions.

How it's used: As a pejorative for non-Muslims who fail to understand -- and unwittingly aid, or even appease -- the Islamic menace

Example: "These dhimmi effetes at the Times think their toe licking will save them. They will be the first ones with their heads on the chopping block." -- the blogger Pamela Geller

What it actually means: "Protected people." The dhimmi were non-Muslims living under Muslim rule who paid a special tax and in return were permitted to practice their own religion, be led by their religious leaders and be guided by their own religious laws and customs. This treatment was very advanced at the time. No such tolerance existed in Christendom where Jews, Muslims and Christians who did not accept the authority of the pope were persecuted, forced to convert or expelled.

However progressive this policy may have been in the past, it would amount to second-class citizenship for non-Muslims today. Therefore, some insist that non-Muslims must be given full citizenship rights because of the Quran’s emphasis on the equality of all humanity. This need for reinterpretation can be seen in the increased incidents of discrimination and violence against non-Muslims in countries like Egypt, Iraq, Nigeria, Pakistan, Malaysia and Indonesia.

How it's used: As casual shorthand for Muslims' war against the West

Example: "Stealth jihadis use political, cultural, societal, religious, intellectual tools; violent jihadis use violence. But in fact they're both engaged in jihad and they're both seeking to impose the same end state which is to replace Western civilization with a radical imposition of Sharia." -- Newt Gingrich

What it actually means: Literally, "struggle" or "exertion" in the path of God, following God's Will. It is a concept with multiple meanings, used and abused throughout Islamic history. The importance of jihad is rooted in the Quran’s command to struggle in the path of God and in the example of the Prophet Muhammad and his early Companions. The two broad meanings of jihad, nonviolent and violent, are contrasted in a well-known Prophetic tradition. "Greater" jihad is the struggle within oneself to live a righteous life and submit oneself to God’s will. "Lesser" jihad is the defense of Islam and the Muslim community.

Jihad as struggle pertains to the difficulty and complexity of living a good life: struggling against the evil in oneself -- to be virtuous and moral, making a serious effort to do good works and help to reform society. Depending on the circumstances in which one lives, it also can mean fighting injustice and oppression, spreading and defending Islam, and creating a just society through preaching, teaching and, if necessary, armed struggle or holy war. A radicalized violent minority combines militancy with messianic visions to inspire and mobilize an army of God whose jihad they believe will liberate Muslims at home and abroad.

How it's used: As an explanation for why Muslims cannot be trusted -- because their religion allows them to ethically practice deception

Example: "Thus it is reasonable to conclude that Keith Ellison’s deceitful pronouncements at Thursday’s Homeland Security Hearings, this past Thursday, and one day later on 'Real Time With Bill Maher,' are consistent with the Koranic doctrine of taqiyya, Islamic religious dissimulation." -- writer on Andrew Breitbart's Big Peace site

What it actually means: Precautionary dissimulation of religious belief and practice in the face of persecution. Muslims recognize the personal duty of affirming right and forbidding wrong, but when confronted by an overwhelming injustice that threatens the well-being of an individual, this obligation can be fulfilled secretly in the heart rather than overtly. Among Shia Muslims, who from the death of the Prophet onward considered themselves subject to persistent religious persecution by the Sunni majority and the holders of political power, taqiyya permits not only passive or silent resistance, but also an active dissimulation of true beliefs when required to protect life, property and religion itself.

How it's used: To refer to a rigid set of Muslim laws that prescribe stoning for adulterous women, execution for homosexuals, etc.

Example: "We all know what shariah law does to women -- women must wear burqas, women are subject to humiliation and into controlled marriages under Sharia law. We want to prevent it from ever happening in Texas." -- Texas state Rep. Leo Berman

What it actually means: Historically, many Muslims and non-Muslims have come to confuse and use the terms "Shariah" and "Islamic law" interchangeably. Because the Quran is not a law book, early jurists used revelation as well as reason to create a body of laws to govern their societies. But, over time, these man-made laws came to be viewed as sacred and unchangeable. Muslims who want to see Shariah as a source of law in constitutions therefore have very different visions of how that would manifest. Though the definition of Shariah refers to the principles in the Quran and prophetic tradition, some expect full implementation of classical or medieval Islamic law; others want a more restricted approach, like prohibiting alcohol, requiring the head of state to be a Muslim, or creating Shariah courts to hear cases involving Muslim family law (marriage, divorce and inheritance). Still others simply want to ensure that no constitutional law violates the principles and values of Islam, as found in the Quran.

How it's used: To refer to a place where Muslim youth are indoctrinated into radicalism and, often, terror

Example: "I am very concerned that the school will be a madrassa, funded by taxpayer dollars. We will in effect be supporting the training of future terrorist cells." -- Opponent of a proposed Arabic-themed New York school

What it actually means: A place where teaching, studying and learning take place. In early centuries, "madrassa" came to refer to a school of higher studies (college or university) where Islamic sciences were taught. Today, the term is also often used more broadly. Like the term "school" in American English, it can refer, for example, to a university, seminary, college as well as primary or secondary school. In recent years, the term has taken on a negative connotation, and for some simplistically equated with militant madrassas or schools in Pakistan and elsewhere. While they certainly exist and are dangerous training grounds, they represent a relatively small number of the institutions/schools that are referred to as madrassas.

How it's used: As a negatively charged byword for a special Islamic deity

Example: "The animals of Allah for whom any day is a great day for a massacre are drooling over the positive response that they are getting from New York City officials over a proposal to build a 13 story monument to the 9/11 Muslims who hijacked those 4 airliners." --Tea Party activist Mark Williams

What it actually means: Arabic for "God" (the term is used by Muslims and Arab Christians for God but is also used in Arabic-influenced languages and thus by Turkish and Malaysian Christians and others). Muslims believe Allah is the same deity worshiped by Jews and Christians. The first verses of the Quran present the basic Muslim view of God: "Praise be to Allah, the Lord of the Worlds, the Merciful, the Compassionate, the Sovereign of the Day of Judgment. Truly, it is You we worship and You whose aid we seek." He is creator, sustainer, judge and ruler of the universe; all-powerful and all-merciful. Allah is described as the Merciful and Compassionate; every verse of the Quran begins with "In the name of God, the merciful, the compassionate." Believed to have revealed himself to a long line of prophets (including the biblical prophets), to Moses, Jews (Torah) and Jesus (Gospels). As in Judaism and Christianity, God is also seen as the Just Judge who is to be obeyed and feared as well as loved.