Why is bland, boring Ryan Reynolds a star?

Against all odds, the "Green Lantern" actor has managed to become a marquee name. We try to explain how 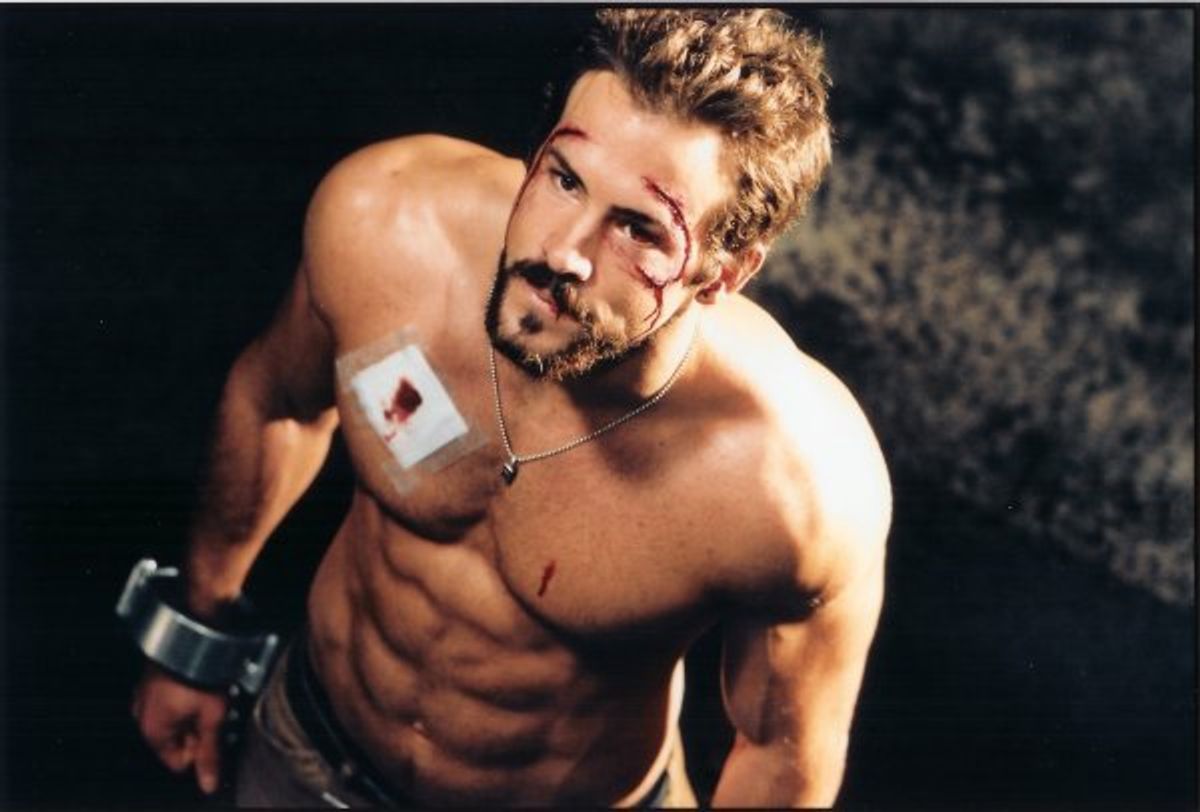 Ryan Reynolds … where did he come from? It seems just yesterday that the most this Canuck was known for was playing Van Wilder in a National Lampoon movie and being engaged to Alanis Morissette, and suddenly he's the buff, wisecracking superguy from both the "Wolverine" movie and "Green Lantern," as well as the ex-Mr. Scarlett Johansson. For a guy whose major talent seems to be light banter and non-threatening, bland sexuality, he's certainly managed to make it far past the other Zach Morrises of this world

So you may be wondering, as we are: Why did Ryan get A-listed over his arguably more talented costars? What gives him that extra spark when he can be, at times, little more than barely, pleasantly watchable. And when did this no-name pretty boy get on the track to becoming the Sexiest Man of the Year?

In order to properly assess the Ken Doll from up north's rise to unlikely action hero fame, we have to go back to his somewhat humble beginnings. He's been acting since he was a kid, most notably on Nickelodeon's teen drama series "Hillside" -- or, as it was called in the states, "Fifteen" -- which was like "90210" but minus the sex, drugs and valley girl accents:

As you can see, Ryan's talent didn't come from being a childhood thespian. He was good, but he didn't pop off the screen. He was more, well, "adequate" is the word that comes to mind.

As recently as seven years ago, I remember being unable to distinguish the blandly handsome and pithy Reynolds from Michael Rosenbaum (who played Lex Luthor on "Smallville"), or Dane Cook. (Hey, they both were in that "Waiting" movie!) Ryan had cut out a niche for himself playing the smarmy "Saved by the Bell" types, like on ABC's short-lived series "Two Guys, a Girl, and a Pizza Place," or "Van Wilder," a role that led to an odd reprise in "Harold and Kumar Go to White Castle."

Though the role wasn't supposed to be Van Wilder, per se, many people associated the cameo with Reynold's only title character to date, mainly because Kal Penn's first film happened to be the National Lampoon film.

Then in 2004, something funny happened. "Blade Trinity" came out, and even though it wasn't even the best of the "Blade" franchise, something about Ryan's embodiment of the vampire/vampire hunter Hannibal King struck a chord with audiences. Emphasis on the "body": Reynold's abs nearly stole the film. According to his interview in People for the 2010 Sexiest Man cover:

"My body naturally wants to look like Dick Van Dyke," says the 6'2" actor .... "When I stop training, I turn into a skin-colored whisper."

Never before has an actor's shirtless transformation so entranced audiences with his less-than-stellar performance. After "Trinity" Ryan went back to doing those passable rom-coms, like "Just Friends" and "Definitely, Maybe," but it wasn't till he was shirtless (and pants-less) with Sandra Bullock in "The Proposal" in 2009 that he once again garnered more attention. It was also the year that Reynold's was announced to be getting his own "Deadpool" spin-off based on his other action role to date at the time: a toss-away character in "X-Men Origins: Wolverine," whose quippy one-liners and flippant attitude regarding good and evil -- along with some totally sweet guns -- seemed to have been tailor-made for the actor.

And then there was his marriage to Scarlett Johansson. It'd be a mistake to underplay what this romance did for Ryan's career; his previous public relationship announced as an engagement in 2004 (the year of "Blade Trinity) to Canadian singer Alanis Morissette, in a move that made us all go, "Who? Oh, that guy? Cool … glad she's not with Dave Coulier anymore." At the time of his first engagement, Ryan was still being referred to as "'Van Wilder' star." Five years later, he and his wife were being named (independently) the sexiest people on earth.

When the couple separated late in 2010, I wondered if Ryan would just fade away. Now, about his former marriage, Reynolds will only say that the media wasn't invited into his relationship, and "I'm a different person than I was six months ago."  And that's more than apparent: for maybe the first time in his career, Ryan is headlining a blockbuster summer action film. He's more famous than his costars, and for more than just his good jawline, quick wit and jaw-dropping body. Ryan has finally obtained the unsinkable air of someone with "star power," despite his seemingly lack of any, and it will be up to his next several career choices to see whether he can keep his momentum. And let's hope his metabolism holds up too.