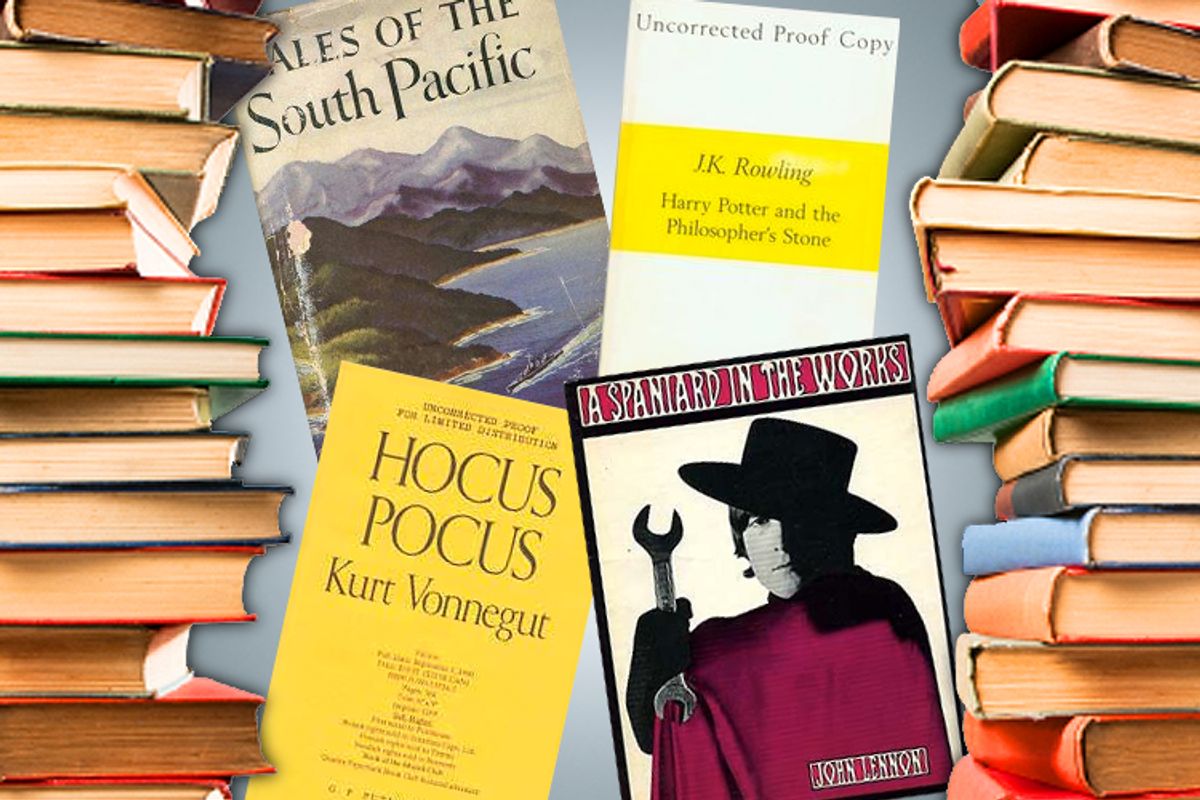 If you thought the hardcover edition of "Harry Potter and the Deathly Hallows" was expensive at $35, you may be in for quite a shock. Online bookselling service Abebooks recently scoured their partner stores' inventories for rare review copies of literary masterworks; here we've highlighted ten of the most interesting items they found, from vintage Potter to Michener's "Tales of the South Pacific." We've added salient details -- including, of course, price.

From the listing: These were the only titles for which there were proof copies done: after the third book, Bloomsbury did not print or issue prepublication proofs. Reportedly, there were only 200 copies of the proof for Philosopher's Stone and only 50 copies of the purple proof for Prisoner of Azkaban, which means that no more than 50 sets such as this could ever be assembled, making this perhaps the rarest set of Harry Potter items possible.

From the listing: We know of only two other copies of this proof surfacing over the years.

From the listing: This proof copy is in the very fragile "pad-bound" format, which presumably accounts for its extreme scarcity: pad-bound proofs, because of the way they're constructed, tend to lose their front or rear covers over time; what was undoubtedly a scarce proof to begin with is now exceptionally rare.

From the listing: Extremely scarce: Michener's first book is uncommon even in the first trade printing; we have never seen another set of these sheets or any other prepublication copy.

From the listing: The only proof copy we have handled, and only the third that we have heard about.

From the listing: A bit cocked, slight spine erosion, a near very good copy of a fragile and uncommon issue.

From the listing: [C]ontains the story "I, Rocket" that was ultimately deleted from the first printing.... The title is handwritten on the spine.

From the listing: Only copy of the Canadian proof that we have seen.

From the listing: [This] play, based on the author's own novel, was the basis for the David O. Selznick film, the first directed in America by Alfred Hitchcock, and which featured Laurence Olivier, Joan Fontaine, George Sanders, and Judith Anderson. Hitchcock was nominated for an Oscar and the film won the Academy Award for Best Picture.

From the listing: Signed and dated "April 7 2003" by Vonnegut on the half-title page.