Nearly a month after the deadly twister, the Joplin Humane Society is overflowing with animals 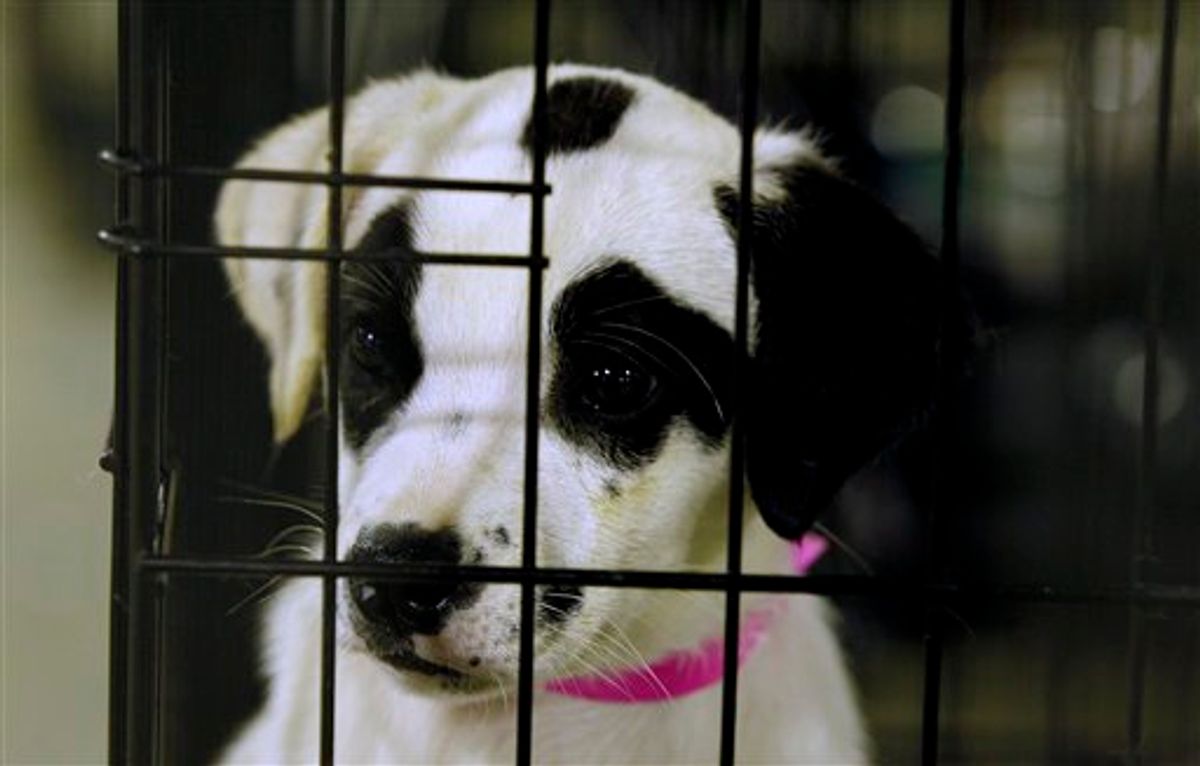 In this photo taken Tuesday, June 14, 2011, a puppy looks out of its cage at a shelter in Joplin, Mo. More than three weeks after an EF5 tornado ripped through Joplin, nearly 900 dogs and cats remain sheltered at the Humane Society, most of them unlikely to ever be reunited with their owners. (AP Photo/Charlie Riedel) (AP)
--

Hundreds of dogs and cats peer out from their cages at the Joplin Humane Society, some with cuts, infections and broken bones from the deadly tornado that turned their lives, like of those their owners, upside down.

Since the tornado, the Humane Society has found itself overflowing with animals, with about 900 now calling the shelter home -- three times its usual inventory. One way or another, the pets became separated from their owners in the chaotic aftermath of the May 22 twister that tore through this town, killing 153 people. In some cases, the owners -- scrambling to find housing for themselves after 7,000 homes were destroyed, leaving nearly one-third of the city's 50,000 residents homeless -- have simply given up their pets.

But the Joplin Humane Society is determined to find a home for every cat and dog. To that end, it plans an "Adopt-a-thon" the weekend of June 25-26, when animals that haven't been claimed by their owners will be given away free to good homes, after being spayed and neutered.

"The reality is, a lot of these people aren't in a position to come get these animals," said Joplin native Tim Rickey, a field investigator for the American Society for the Prevention of Cruelty to Animals. "They've lost everything."

Executive director Karen Aquino said it's not that the Humane Society hasn't tried to find the owners.

"We feel we've exhausted every avenue to get the word out," Aquino said. "We've placed 250 yard signs. We have posters at food and donation distribution points, public service announcements on radio and TV, ads in the newspaper -- everything we could think of to let people know their pets might be here if they're missing."

To handle the additional cats and dogs, the organization fixed up two vacant warehouses next to the shelter into air-conditioned kennels. A gravel parking lot outside a former used appliance store has been converted into an owner's waiting room, with plastic chairs and Polaroid snapshots of unnamed animals stuffed into thick three-ring binders.

Aquino said none of the pets left homeless by the tornado will be euthanized.

"If all of them aren't adopted, we'll start looking to rescue organizations and ways to get some of them to larger cities where they have a better chance at adoption," she said.

More than 100 volunteers from across the country, many from other shelters, are in Joplin helping out -- cleaning cages, providing veterinary care and exercising the animals. On most days, a half-dozen veterinarians are at the shelter tending to the wounded.

The work is exhausting, the plight of the animals sad. But spirits are buoyed by good news, such as the recent story of a cat found alive by its owner 16 days after the tornado.

When Steven and Debbie Leatherman found their lost dog, Sugar, at the shelter, her back legs were paralyzed. Someone had apparently dropped off the 10-year-old cocker spaniel after finding her in a drainage ditch and about to drown. The University of Missouri says the Leathermans' son, Daniel, drove the dog to its veterinary hospital in Columbia, where veterinarians performed spinal surgery that gave Sugar back the use of her legs.

But some owners, such as 47-year-old Linda Head, still haven't been able to find their pets. Since the storm, Head has been looking for 2-year-old Isabel, a labrador/Great Pyrenees mix, and 5-year-old Puddles, a cockapoo.

Both dogs hunkered down with Head, her 23-year-old son and a third dog, Max, in and around a bathtub in their home that was obliterated by the tornado. Head lost Puddles when the dog jumped through the shattered window of a car as Head's son was driven to seek medical care. Max also jumped out in the tumult, but he turned up nearly two weeks later at a Kansas veterinarian's office. Isabel hasn't been seen since the tornado, though Head's hopes were briefly buoyed when a neighbor thought he saw the dog running loose. He was mistaken.

Head visits the shelter twice a week, hoping her dogs will turn up.

"Honey, when I left here the first time, I bawled all the way home," Head said during a recent visit to the shelter. "I'll bawl all the way home today, because I don't have my buddies."

Salter reported from Kansas City. Alan Scher Zagier can be reached at http://twitter.com/azagier